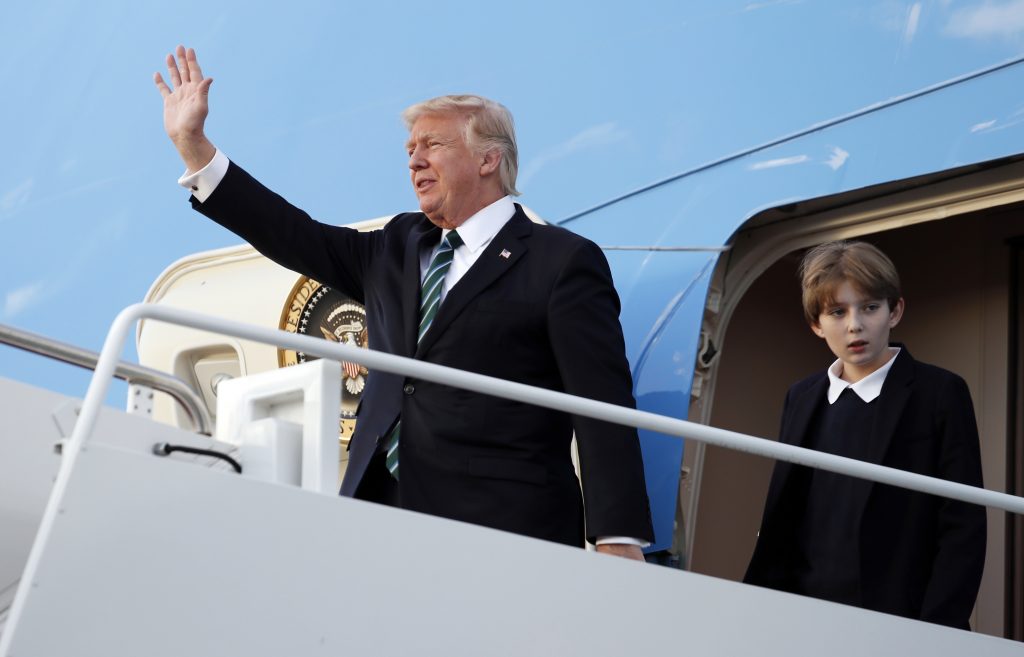 President Donald Trump said Saturday that Germany owes “vast sums of money” to NATO and the U.S. “must be paid more” for providing defense, reiterating his stance that European allies need to meet their end of the bargain if they are to continue benefiting from the military alliance.

President Trump’s tweet from his Florida resort, where he is spending the weekend, came the day after his first meeting with Germany’s leader.

“Despite what you have heard from the FAKE NEWS, I had a GREAT meeting with German Chancellor Angela Merkel,” the president wrote. “Nevertheless, Germany owes … vast sums of money to NATO & the United States must be paid more for the powerful, and very expensive, defense it provides to Germany!”

President Trump and Chancellor Merkel tried to sidestep their differences in their meeting at the White House on Friday, but it was punctuated by some awkward moments.

During a photo op in the Oval Office, the two did not shake hands before reporters. Later, during a joint news conference, President Trump pushed back against the notion in Europe that his “America First” agenda means he’s an isolationist, calling such a suggestion “another example of, as you say, fake news.” And he referred to the United States as “a very powerful company,” before quickly correcting that to “country.”

The president reaffirmed the United States’ “strong support” for NATO, but reiterated his stance that NATO allies need to “pay their fair share” for the cost of defense. President Trump said at the press conference that many countries owe “vast sums of money” — but he declined to identify Germany, at the time, as one of those nations.

Prior to his inauguration, President Trump declared NATO “obsolete” but has since modified his stance, telling European leaders the alliance remains of strategic importance. Only the U.S. and four other members currently reach the benchmark of spending 2 percent of GDP on defense. Germany currently spends 1.23 percent of its GDP on defense, but it is being increased.

When the topic moved to trade, President Trump said the U.S. would do “fantastically well” in its trade relations with Germany. The president has been deeply critical of foreign trade and national security agreements but suggested he was only trying to revise trade deals to better serve U.S. interests, rather than pull back from the world entirely.

President Trump said trade agreements have led to greater trade deficits. The U.S. trade deficit with Germany was $64.9 billion last year, the lowest since 2009, according to the Commerce Department.

Chancellor Merkel maintained her composure when President Trump repeated his contention that former President Barack Obama may have tapped his phones in Trump Tower. He sought to turn the explosive charge into a light joke when asked about concerns raised by the British government that the White House is now citing a debunked claim that U.K. spies snooped on President Trump.

“At least we have something in common, perhaps,” President Trump said casually, referring to 2013 reports that the U.S. was monitoring Chancellor Merkel’s cellphone conversations. As for the most recent report, President Trump said he shouldn’t be blamed for quoting a Fox News analyst who had accused British intelligence of helping Obama spy on him.

On economic issues, Chancellor Merkel attempted to project a conciliatory approach. She said the “success of Germans has always been one where the German success is one side of the coin and the other side of the coin has been European unity and European integration. That’s something of which I’m deeply convinced.”

Those comments appeared aimed at making a case to President Trump on the benefits of the European Union. President Trump backed Britain’s departure from the EU and has expressed skepticism of multilateral trade agreements.

The two leaders tried to express their common bonds but showed minimal rapport in their first encounter, a departure from Chancellor Merkel’s warm relations with Obama during his eight years as president. At the start of the news conference, Chancellor Merkel sought to break the ice, saying that it was “much better to talk to one another than about one another.”

Chancellor Merkel said delicately that while she represents German interests, President Trump “stands up for, as is right, American interests. That is our task respectively.” She said they were “trying to address also those areas where we disagree but tried to bring people together.”

“We need to be fair with each other,” Chancellor Merkel said, saying both countries were expecting “that something good comes out of it for their own people.”

The meetings at the White House included discussions on fighting the Islamic State terror group, the conflict in Afghanistan and resolving Ukraine’s conflict, all matters that require close cooperation between the U.S. and Germany.

The talks aimed to represent a restart of a relationship complicated by President Trump’s rhetoric on the campaign trail. As a candidate, President Trump frequently accused the chancellor of “ruining” Germany for allowing an influx of refugees and other migrants from Syria and accused his campaign rival, Hillary Clinton, of wanting to be “America’s Angela Merkel.”