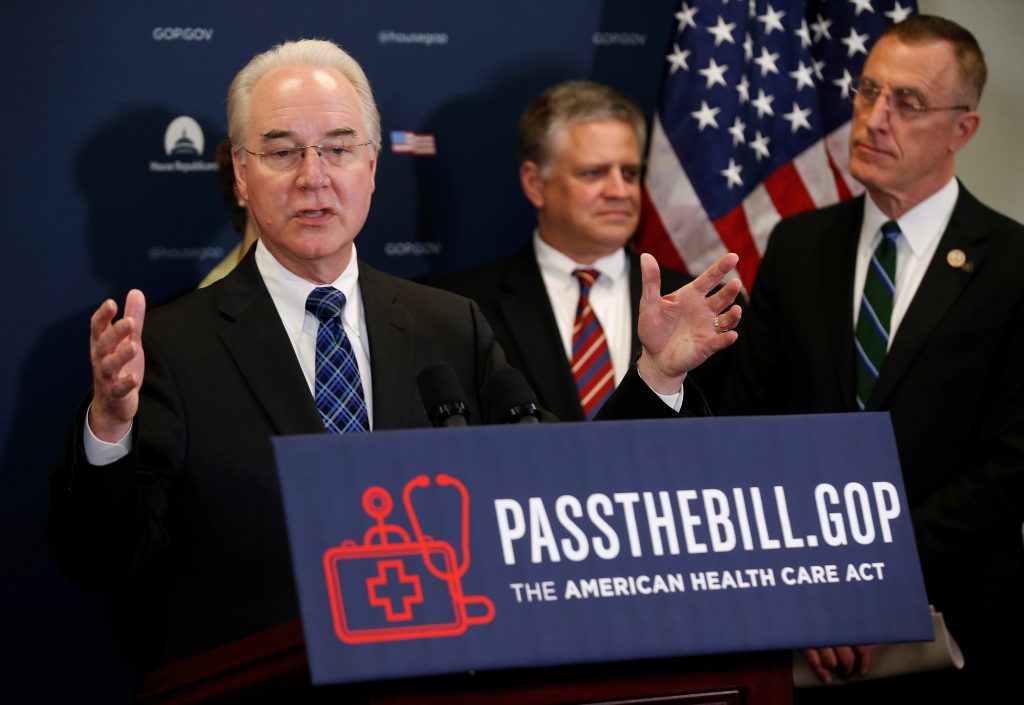 President Donald Trump and some House conservatives agreed Friday to make changes to the Republican health-care bill, in hopes of easing deep party divisions over the overhaul plan. But other conservatives expressed continued opposition, and it remained uncertain that party leaders had won enough support to push the high-profile measure through the House next week.

After a White House meeting between President Donald Trump and around a dozen House Republicans and late-night telephone talks, a leader of one group of House conservatives said he and others were now backing the legislation. The bill would kill much of former President Barack Obama’s 2010 health-care law and create new tax credits and curbs on Medicaid, the federal-state health-care program for lower-income people.

“I want everyone to know I’m 100 percent behind this,” Trump said at the White House.

Lawmakers said the two sides agreed to additional restrictions on Medicaid that states would be allowed to choose. They said states could impose work requirements on some recipients and decide to accept a lump-sum federal payment for Medicaid, instead of an amount that would grow with the number of beneficiaries.

“We’re a yes. We’re excited to be there,” said Rep. Mark Walker, R-N.C., leader of the Republican Study Committee, a large group of conservatives.

House Majority Leader Kevin McCarthy, R-Calif., said votes on the legislation were planned for next Thursday.

The House GOP’s vote counter, Rep. Steve Scalise of Louisiana, also attended the meeting and said the changes give Republicans “the best chance” to get the legislation to the Senate. GOP divisions also threaten the legislation in that chamber.

Rep. Mark Meadows, R-N.C., head of another, harder-line group of conservative House lawmakers, said earlier that the changes being discussed were not enough to win his support. Meadows did not attend the White House meeting.

“They won’t have the votes unless they change it” further, said Meadows, who leads the House Freedom Caucus. He said that an optional work requirement for Medicaid “doesn’t move the ball more than a couple yards on a very long playing field.”

Earlier, Health and Human Services Secretary Tom Price told reporters at the Capitol that he wants lawmakers “to get together and collaborate and come forward with a work product that will respond to the needs of the American people.”

Hoping to secure support, Trump was meeting with a group of House conservatives at the Oval Office.

Although the House bill has cleared three committees, some lawmakers can visualize scenarios in which things come apart. Rep. Bill Flores, R-Texas, said it’s important to get the legislation passed before Congress leaves for a two-week spring recess next month.

“That’s never healthy to let something sit out there too long, because pretty soon you have a carcass left,” he said.

Critics say the Republican plan would make health insurance more expensive for individuals, especially older adults and those with modest incomes. An analysis by the nonpartisan Congressional Budget Office found 24 million people would lose their health insurance over a decade, though the bill would also reduce the deficit.

In the Senate, Susan Collins, R-Maine, told The Portland Press Herald, “This is not a bill I could support in its current form.” She joins Kentucky’s Rand Paul and Utah’s Mike Lee in opposing the legislation, while other Republicans, including Tom Cotton of Arkansas and Ted Cruz of Texas, have expressed deep misgivings. Collins’ opposition leaves the bill short of the support it needs in the Senate unless it changes, since GOP leaders can only lose two votes.

In another warning signal, four GOP governors wrote congressional leaders Thursday saying the bill’s approach to Medicaid would not work for states. Medicaid covers more than 70 million people, and its future is expected to be a central issue in the Senate.

“It provides almost no new flexibility for states, does not ensure the resources necessary to make sure no one is left out, and shifts significant new costs to states,” wrote Govs. John Kasich of Ohio, Rick Snyder of Michigan, Brian Sandoval of Nevada and Asa Hutchinson of Arkansas.