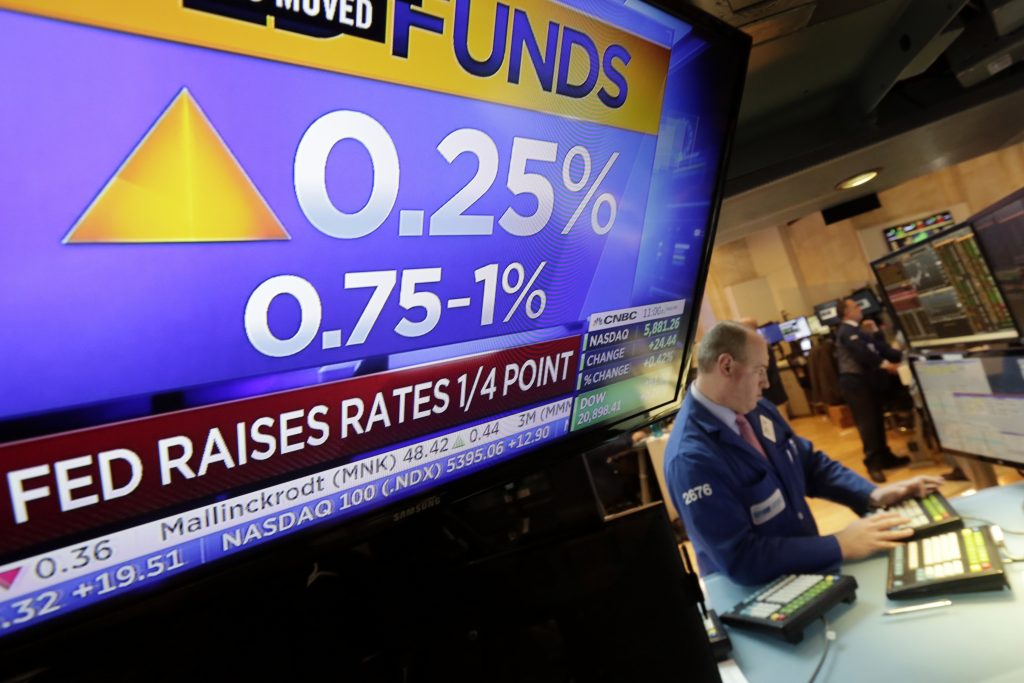 The Fed raised short-term interest rates by a quarter of a percentage point, its third such move since the end of 2015. The move was widely expected. The central bank stressed that it plans to move gradually and stuck to its projection that it will raise rates a total of three times this year. That cooled speculation among some investors that the Fed could move more aggressively.

Stocks rose as investors took the Fed’s widely anticipated rate hike in stride. The Standard & Poor’s 500 index jumped 0.8 percent to 2,385.26. The Dow Jones industrial average rose 0.5 percent to 20,950.10. The Nasdaq composite picked up 0.7 percent to 5,900.05. Gains were widespread, and seven stocks rose on the New York Stock Exchange for every one that fell.

“The Fed took off as expected but left the market with a more ‘gradual’ view with regards to future rate hikes,” said Jingyi Pan of IG in a report. “Comments by Federal Reserve chair Janet Yellen in her press conference had been perceived as dovish. The Fed chair had reiterated that the committee expects a ‘gradual increase’ in rates on the back of evolving economic conditions and monetary policy ‘remains accommodative’ at present.”

Japan’s central bank held monetary policy steady as the Fed and Europe’s central bank move toward tightening. The Bank of Japan ended a policy meeting by, as expected, leaving its benchmark lending rate unchanged at minus 0.1 percent and saying it would work toward a 2 percent inflation rate target. The central bank is buying about 80 trillion yen ($700 billion) a year of Japanese government bonds to inject cash into the economy. Interest rates are near zero with the goal of stimulating inflation to encourage businesses and consumers to borrow and spend. The BOJ said the world’s third-largest economy was on a “moderate recovery trend.”