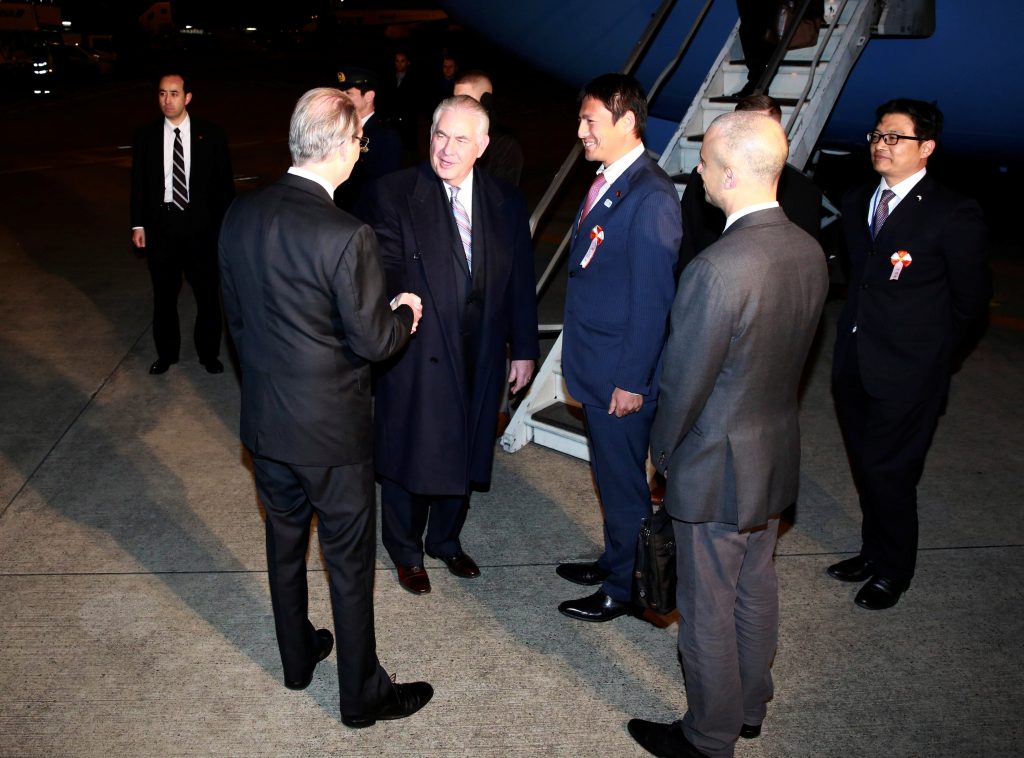 On Wednesday U.S. Secretary of State Rex Tillerson began a three-nation tour of Asia where anxiety is rising over North Korea’s nuclear and missile programs, along with questions over how the Trump administration will tackle one of its sternest national security challenges.

Tillerson flew to his first stop in Japan as the U.S., Japanese and South Korea navies conducted missile defense information-sharing drills in the region. Uncertainty remains, however, over how the U.S. administration intends to pressure or persuade North Korea to give up its nuclear weapons that also pose an emerging threat to the United States itself.

Tillerson is to meet with Japanese Prime Minister Shinzo Abe and Foreign Minister Fumio Kishida on Thursday. He will also travel to South Korea, which is gripped by domestic political turmoil after the ouster of its president, and then to China, which is conflicted about how to treat North Korea — its traditional ally — for fear of triggering its collapse.

Adding to the combustible mix of military tension and the region’s historic rivalries is another factor — confusion about U.S. foreign policy under the Trump administration.

The former Exxon Mobil CEO has adopted a low profile during his six weeks as secretary of state. The State Department Correspondents’ Association expressed disappointment on Wednesday that Tillerson was traveling to Asia without a full contingent of the diplomatic press corps or even a pool reporter on his plane — although he did take a reporter from the conservative-leaning website the Independent Journal Review.

President Donald Trump’s rise to power has raised anxiety in Asian capitals. During last year’s election campaign, President Trump asked whether allies like Japan and South Korea contribute enough for their own defense or should get their own nuclear weapons. He also questioned the fundamentals of four decades of U.S. diplomacy with China.

Mr. Trump has allayed some of those concerns since taking office. He hosted Prime Minister Abe at his Florida resort last month, and when Mr. Tillerson goes to Beijing on Saturday, the secretary of state is expected to arrange a much-anticipated visit by Chinese President Xi Jinping to the U.S.

“The U.S. allies, Japan and South Korea, want to know that the United States is going to continue to defend them but also is going to show a certain amount of finesse and diplomatic skills in dealing with China and with North Korea,” said Mr. Robert Dujarric, director of the Institute of Contemporary Asian Studies at Temple University’s campus in Tokyo.

North Korea will be a top priority on all Tillerson’s stops. The State Department says that Tillerson wants to discuss “fresh” approaches. Administration officials say that all options are on the table, including military ones, but signs are that the U.S. for starters wants to see rigorous implementation of existing sanctions against the North.

As under the Obama administration, there appears to be little desire for how to negotiate with North Korea, unless it commits to denuclearization, which it shows no sign of doing.

The U.S. is currently involved in annual military drills in South Korea that North Korea regards as a rehearsal for invasion. In a show of defiance, North Korea fired four ballistic missiles into the ocean off Japan last week. The next day, the U.S. began bringing in equipment for the long-planned deployment in South Korea of a missile defense system known by its acronym, THAAD.

That has raised tensions with China, which says the THAAD’s radar could peer into Chinese territory, weakening its own nuclear deterrent. The U.S. says that the system is intended to be used only against North Korea. That adds to the long list of sharp differences between Washington and Beijing on issues like their trade imbalance and the militarization of the South China Sea.

After Tokyo, Mr. Tillerson visits South Korea, caught up in political upheaval after last week’s ouster of its president, Park Geun-hye, over a corruption scandal. Park had been in lockstep with Washington’s efforts to isolate North Korea. The favorite to succeed her is Moon Jae-in, a moderate who wants to engage North Korea’s government.

Mr. Tillerson’s final leg involves meetings with several senior Chinese officials in Beijing. China recently announced that, for the rest of the year, it was suspending coal imports, which are an important source of revenue for North Korea. That is to comply with U.N. sanctions aimed at restricting the North’s nuclear and ballistic missile programs.

Chinese Premier Li Keqiang on Wednesday called for all parties to return to talks. Aid-for-disarmament negotiations have been stalled for years. Last week China’s foreign minister warned that the U.S., South Korea and North Korea could be heading for conflict.