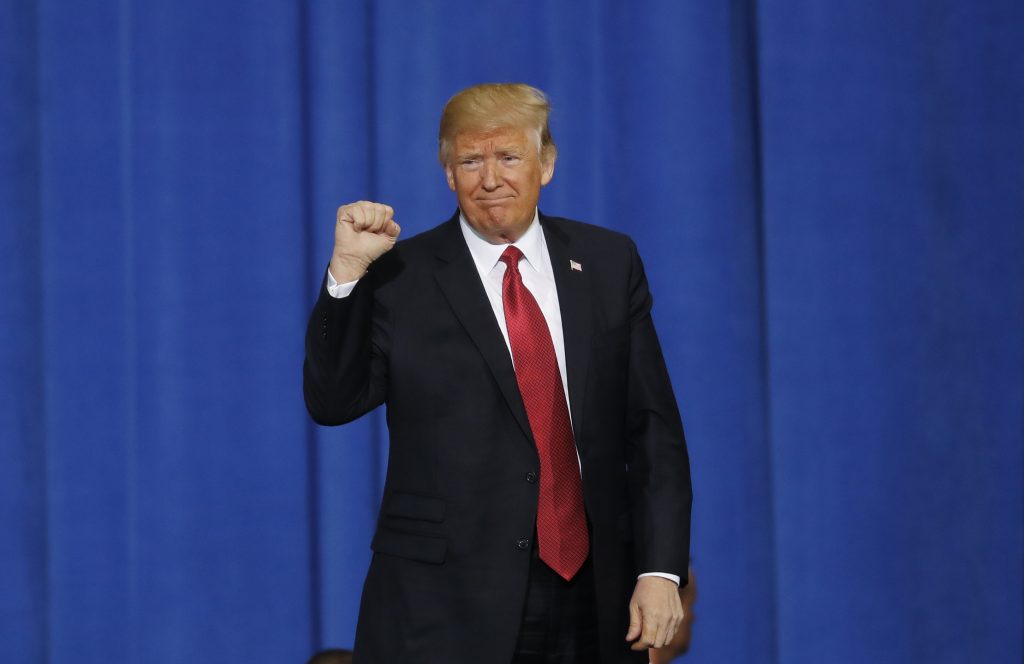 President Trump was set to reveal his plans during a speech at an automotive testing center near Detroit, but he previewed the announcement during a round-table meeting at the American Center for Mobility with auto company executives and workers, just before the speech to a much bigger audience.

“This is going to be a new era for American jobs and job creation,” President Trump said at the meeting.

The EPA under Obama had promulgated a rule for cars and trucks requiring a fleet-wide average of 36 mpg in real-world driving by 2025.

President Trump’s decision, while having no immediate effect, requires the Environmental Protection Agency to determine no later than April 2018 whether the 2022-2025 standards established are appropriate. If the EPA determines they are not appropriate, the agency will submit a new proposal next year.

“My administration will work tirelessly to eliminate the industry-killing regulations, to lower the job-crushing taxes and to ensure a level playing field for all American companies and workers,” President Trump said in the speech at the center, which produced B-24 bombers during World War II and is being converted into an automotive testing and product development facility.

President Trump’s announcement is expected to set the stage for weaker fuel efficiency standards as well as drawn-out legal battles with environmental groups and states such as California that adopted their own tough tailpipe standards for drivers.

“These standards are costly for automakers and the American people,” said EPA Administrator Scott Pruitt. He promised a “thorough review” that will “help ensure this national program is good for consumers and good for the environment.”

The Alliance of Automobile Manufacturers — which represents a dozen major car manufacturers including General Motors, Ford, Fiat Chrysler and Toyota — praised President President Trump’s action. It said he was creating an opportunity for federal and state officials to “reach a thoughtful and coordinated outcome predicated on the best and most current data.”

“If they succeed we’ll pay more at the pump, depend more on oil from bad countries, drive up the trade deficit and pollute our kids’ atmosphere,” said Dan Becker, director of the Safe Climate Campaign.

As a practical matter, President Trump’s announcement will target the Obama administration’s January decision to lock in strict gas mileage requirements for cars and light trucks, ending a review process before the Democrat left office.

Back in 2012, the Obama administration set fuel-economy regulations for model years 2017-2025 and agreed to complete a midterm evaluation by 2018. But seven days before Obama left office, the EPA decided to keep the stringent requirements it had set in place for model years 2022 to 2025. The industry balked at the decision, insisting it was rushed through to beat the change in administrations.

President Trump said he’s putting that midterm review back on track, so officials can spend another year studying the issue before setting new standards in 2018.

President Trump delivered a campaign-style speech in which he railed against big trade agreements, specifically NAFTA and the recent Trans-Pacific Partnership, laying out in stark terms his view of how the pacts had hurt the U.S. auto industry and its workers.

President Trump said he had kept his promise to withdraw the U.S. from the TPP, an agreement that former President Barack Obama pursued with 11 other Pacific Rim nations. President Trump also wants to renegotiate NAFTA, which includes Canada and Mexico, but he did not mention those plans in Wednesday’s remarks.

“The assault on the American auto industry is over,” he declared.

While the administration has not said explicitly it wants to weaken the standards, a senior White House official said the Obama-era EPA had ignored reams of data cited by the automotive industry. The official spoke on condition of anonymity at a White House briefing in order to outline the action, despite the president’s criticism of the use of unnamed sources.

The Auto Alliance last month urged EPA Administrator Scott Pruitt to relax the standards, saying they will drive up car costs, price customers out of the market and depress the industry. Obama’s EPA had argued the costs to consumers were mitigated by gas savings and that the rules would decrease greenhouse gas emissions that contribute to global warming.

Mr. Trump campaigned on eliminating “job killing” regulations, and the administration is expected to take additional steps in the coming days to roll back environmental regulations.

After the speech, President Trump was headed to Nashville, Tennessee, to lay a wreath at President Andrew Jackson’s tomb to mark what would have been Jackson’s 250th birthday, before holding a campaign-style rally in the city.

President Trump will tour Jackson’s home, according to Howard Kittell, president and CEO of the Hermitage mansion. Jackson has enjoyed something of a resurgence thanks to President Trump. During the campaign, some of Trump’s aides took to comparing him to the former president — a fellow populist outsider who took on a member of the Washington establishment and ran a campaign railing against corrupt elites.

President Trump mused during his first days in Washington that “there hasn’t been anything like this since Andrew Jackson” and hung a portrait of Jackson in the Oval Office.

Historians had been souring on the slave-owning president whose Indian Removal Act of 1830 commissioned the forced removal of Native Americans from their ancestral homelands. More than 4,000 died during their journeys west.