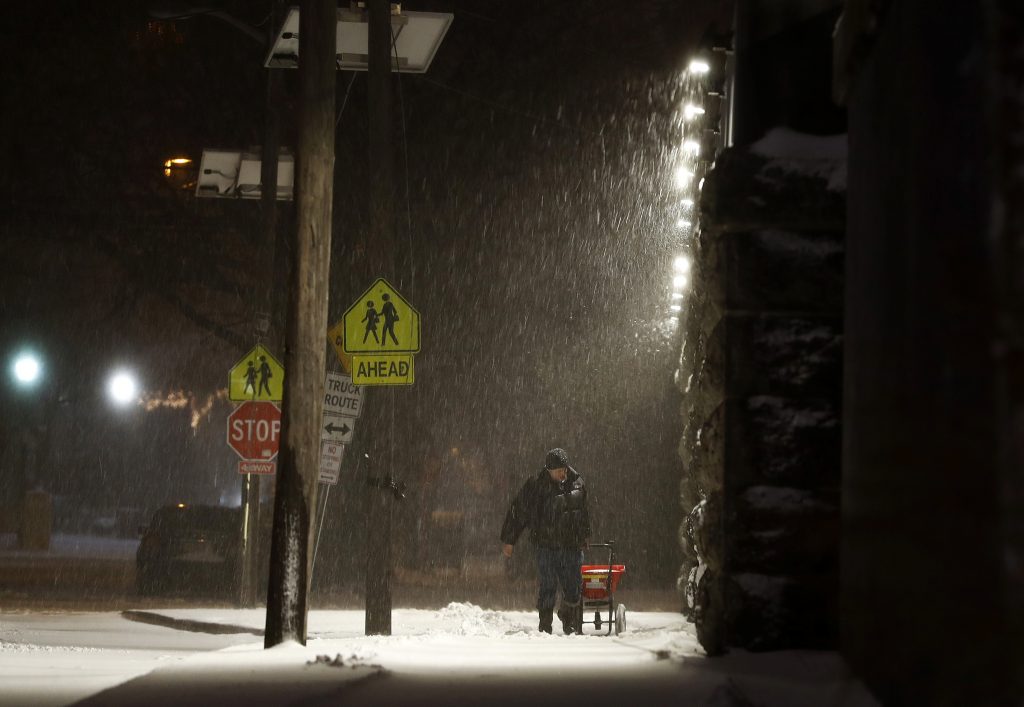 Concerns about falling temperatures and icy conditions on roads and sidewalks across the Northeast followed a late-season storm that plastered the region with sleet and snow.

Tuesday’s powerful nor’easter paralyzed much of the Washington-to-Boston corridor, but fell short of the predicted snowfall totals in New York, Boston and Philadelphia.

The storm, which followed a stretch of unusually mild winter weather, dumped 1 to 2 feet in many places, grounded more than 6,000 flights and knocked out power to nearly a quarter-million customers from Virginia northward.

By the time it reached Massachusetts, it had turned into a blizzard, with near hurricane-force winds gusting to over 70 mph along the coast. Boston ended up with 6.6 inches of snow, far less than what was predicted.

Plunging overnight temperatures threatened to turn the snow, sleet and sloppy mix into a slippery mess, raising fears of black ice for morning motorists and slick sidewalks for pedestrians.

Boston canceled school for a second day as cleanup efforts continued. Mayor Marty Walsh said he made the call out of “an abundance of caution.”

The storm was easily the biggest in an otherwise merciful winter that had mostly spared the region.

While most people heeded the warnings to stay off the roads, police said a 16-year-old girl was killed when she lost control of her car on a snowy road and crashed into a tree in Gilford, New Hampshire.

In East Hartford, Connecticut, an elderly man died after being struck by a snowplow truck.

Philadelphia and New York City got anywhere from a few inches of snow to around half a foot before it switched over to sleet. Forecasters had predicted a foot or more. In New Jersey, which saw rain or just a little snow, Gov. Chris Christie called the storm an “underperformer.” But officials still warned of dangerous ice.

Inland areas, meanwhile, got hit hard. Harrisburg, Pennsylvania, and Worcester, Massachusetts, received a foot or more of snow. The Binghamton, New York area got over 2 feet, while Vernon, New Jersey, had at least 19 inches.

The storm came just days after the region saw temperatures climb into the 60s, and less than a week before the official start of spring.

In the nation’s capital, non-essential federal employees were given the option of reporting three hours late, taking the day off or working from home. The city got less than 2 inches of snow.