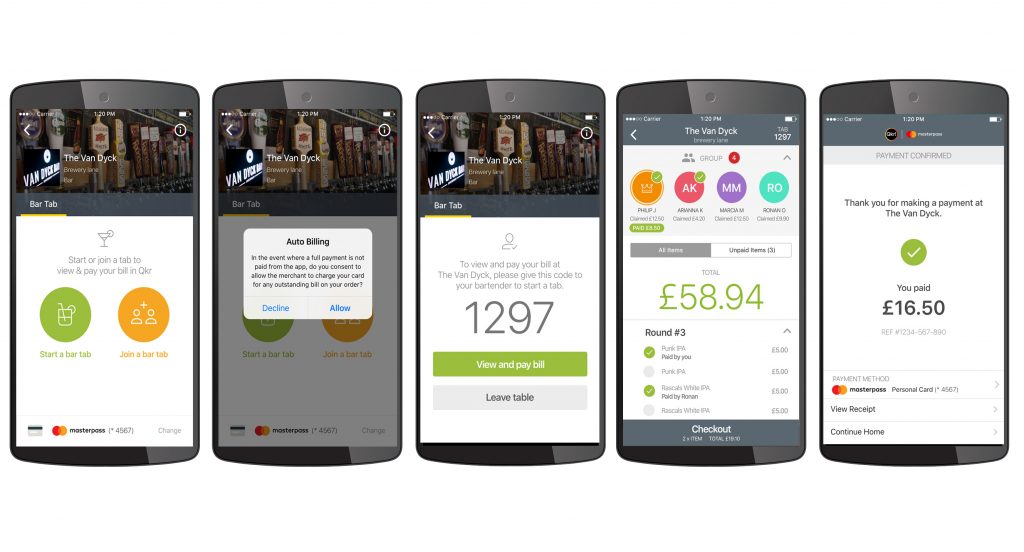 If you’ve ever forgotten to pay your tab and left your credit card at a tavern, or spent several minutes trying to flag down a harried waitress to close you out, there may be a new option.

An upgrade being rolled out this summer to Mastercard’s mobile-payments service will let people open, manage and close their tabs at participating taverns completely through their phones, without having to hand over a credit card. The Open Tab feature, available in the U.S. and the U.K., will be an upgrade to Mastercard’s existing Qkr mobile payment service.

“We heard from so many bars and pubs who always have a number of credit cards left at the end of the evening, and we thought, ‘we know how to address this,'” said Betty DeVita, the business head of Mastercard’s Qkr platform. DeVita also cited Mastercard survey data that it takes on average 12 to 15 minutes to close out a bill, time that could be used to serve more tables and customers.

The service will be free to customers, and the service will cost the same for bars and restaurants as their normal credit-card processing costs, DeVita said. While Mastercard is rolling out the feature, Qkr will work with any major credit card, as long as the merchant accepts it.

Apps like Venmo, Square Cash and bank-specific versions like Chase QuickPay have already changed the dynamic in how some people are paying for things. The payment services that let people send each other money for free via their phones mean you can quickly pay a friend back for a drink or divide the dinner check instead of just hoping that someday soon the friend will take a turn.

Those have the benefit of working at any restaurant, but don’t have the ability to split bills until after the fact.

The new tavern-tab option on Qkr is fairly straightforward. Customers can open the Qkr or the tavern’s app and set up a tab, entering their credit-card information if they hadn’t already done so. Once the tab is ready, customers would get a table number, which they’d give to the bartender each time they order something.

When they’re ready to go, customers can close out their tabs in the app. There are options to add other people to the tab, much like how a person can split a fare on Uber, as well as the ability to pay for individual drinks or pay for rounds of drinks. It also provides the option to automatically leave a tip.

If someone forgets to close out a tab, it’s automatically closed at the end of the night. The bartender never needs to hold onto a credit card, and the bar is protected from fraud like fake cards since the Mastercard already preauthorizes the card before a tab is opened.

Seth Weinberg, the lead bartender at a restaurant at the Fontainebleau Miami Beach resort, said he could definitely see the resort integrating the service.

“Having so many options to split a bill would be great. It can take a lot of work to split a complicated bill on a point-of-sale system that’s not set up correctly,” he said.

But Weinberg said he worried how the service might affect tips, which often make up a substantial part of a bartender or server’s salary.

“You don’t get that last chance to interact with the customer,” he said.

One caveat would be how widely the service is adopted by low-volume taverns and restaurants.

“I wish we had a problem of managing too many bar tabs!” said Jim Grinchis, who owns 204 Main Bar and Bistro in Sharon Springs, New York. “We just don’t have the volume of people to justify this service.”