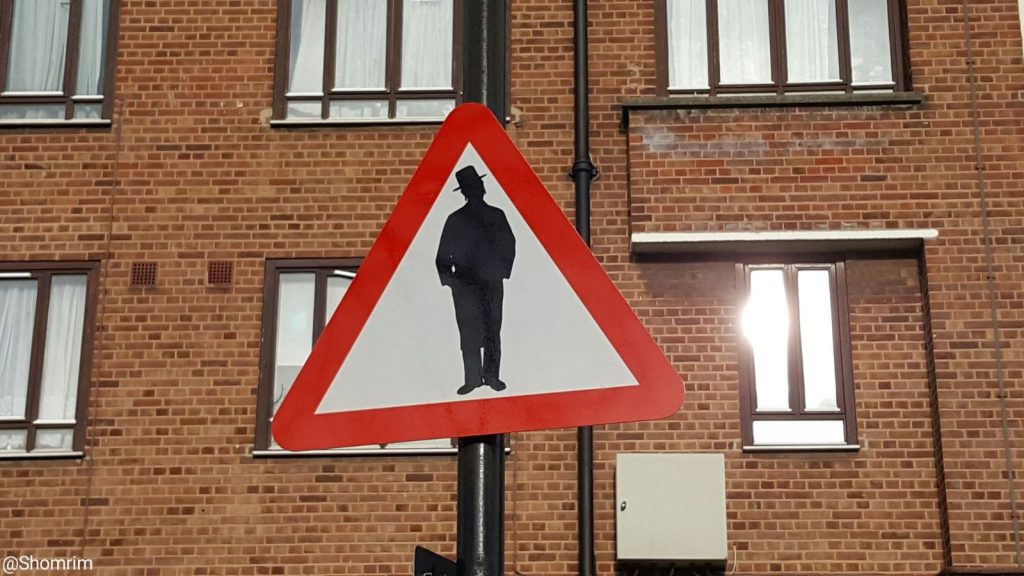 An artist’s placement of a street sign showing the silhouette of a chareidi man in Stamford Hill, London, this week backfired when the sign was mistaken for an anti-Semitic message.

Local media report that as part of a project on identity, French photographer and artist Franck Allais took photos of different people crossing the street. He then used the images as silhouettes and made them into imitation street signs, which he placed around the areas where he took the photos. The silhouette of the chareidi man was placed in Stamford Hill, a frum neighborhood. Other silhouettes Allais made include a woman with a shopping cart, a cat, and a man pushing a wheelchair.

When the sign with the chareidi man was seen, near a shul, it was assumed that it was an anti-Semitic comment, as if warning, “Beware of Jews.” Local Members of Parliament, including Diane Abbott and David Lammy, condemned the sign, saying it was “disgusting” and “unacceptable.” Shomrim reported the sign to the police and the local council, and said it had caused “alarm and distress to local people.”

Allais was upset that his sign had been misinterpreted. “It was a project about crossing the road … how everyone is different, everyone has an identity,” he told The Guardian. “I put more signs up in the street, but only this one got noticed. I am sorry for any offense caused.”

“Of course, it was a Jewish man,” said Allais. “Everyone in the area knows that. I cannot pretend it is not a Jewish man. But I did it because I like the different characters in the area. For me, what makes us human is that we are all different and I wanted to show that.”

Barry Bard, Shomrim’s operational supervisor in the area, said: “The people of Stamford Hill are very sadly used to instances of anti-Semitic hate crime, but most of those times it will be verbal abuse or even assault. A lot of the time it will be more of a person-to-person kind of thing, or graffiti, which is more unprofessional.”

Rabbi Hershel Gluck, president of Shomrim, said, “I’m very pleased that he has apologized, but rather surprised at his lack of sensitivity and knowledge that a sign like this could prove to be offensive, especially with people who have been traumatized in recent history by similar signs barring them from professions and parks. You have to think about the people you are talking about and the type of message and type of meaning it would have for them.”

The community may well be on edge due to a recent rise in anti-Semitic crimes.

The number of anti-Semitic incidents in the U.K. rose to record levels in 2016, more than a third higher than the previous year, according to data released recently by Community Security Trust, an organization that monitors anti-Semitism and arranges security at Jewish events.

Many of the victims have been from the chareidi community.