Israel Amona Residents: If State Won’t Build Us a Settlement, We Will
Israel 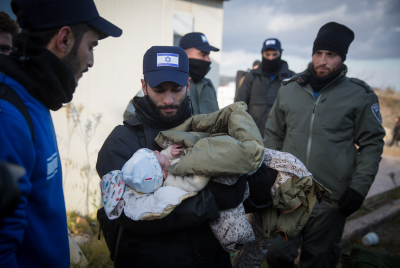 Residents of 35 homes in the central Shomron community of Amona were removed from their homes at the beginning of February in an eviction action that passed relatively quietly — due to the repeated promises by government officials, including Prime Minister Netanyahu himself, that a new settlement would be built for the residents. Several options were offered, and residents voted to accept a site near the Binyamin town of Shilo.

Temporary housing in a new settlement was promised a month before the evictions, when the High Court ruled that there would be no further appeals to prevent the demolition of the Amona homes. The government had promised that a plan would be in place by the eviction date, but that deadline passed with no action on advancing building plans. Frustrated Amona evictees set up a tent city outside the Prime Minister’s Office, and some went on a hunger strike, with evictees wondering if there was any substance to Mr. Netanyahu’s promises at all.

“Two months after President Trump took office, was all this [the agreement on new construction] just a show, a tactic to gain time, or do you really support settlements?” the residents asked Prime Minister Netanyahu. “Amona is your test. There is no legal obstacle to setting up a new settlement, and under the Trump administration, there is no political obstacle either.” Mr. Netanyahu, said the residents, has “no more excuses.” Any further delay in establishing a new settlement for them is due to his own political calculations, and if a concrete plan to do so is not presented by the end of March, residents will take matters into their own hands, residents wrote.

The residents said they had chosen this time to send the letter because of the reported understandings Mr. Netanyahu reached with American liaison Jason Greenblatt at their meeting Tuesday, in which Mr. Netanyahu was told that the U.S. supported a “restrained” settlement policy. If Netanyahu had given a commitment to Amona residents to build them new homes, that would certainly fit into that policy, they wrote. “Trump and Greenblatt are both businessmen, and they understand that a promise is a promise. There appears to be no reason not to move ahead.”