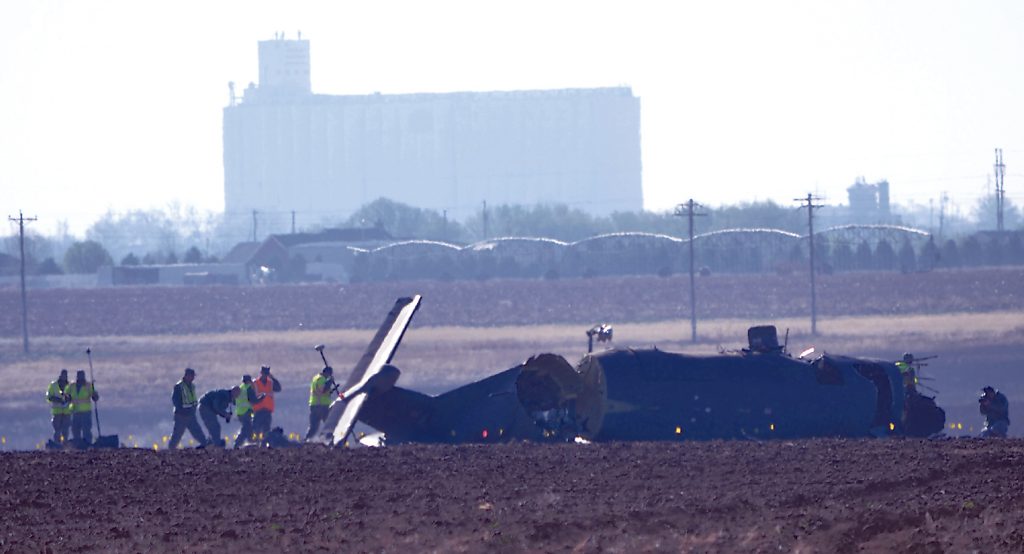 Three service members assigned to a special operations unit were killed after a single-engine reconnaissance and surveillance plane crashed in eastern New Mexico during a training flight, the Air Force said.

Officials at Cannon Air Force Base said the U-28A crashed on Tuesday night in a field about a quarter mile east of Clovis Municipal Airport, about 3 miles east of Cannon. The plane was assigned to Cannon.

The identities of the victims will be withheld until 24 hours after the families are notified, Cannon officials said in a statement.

The cause of the crash is under investigation, and base commander Col. Ben Maitre said during a news conference on Wednesday that it would be premature to speculate. He said there was no indication of any problems with the plane before the crash, and weather reports for the area suggested clear skies.

“Right now, we’re working to secure all of the data from the wreckage and the documentation that went into the preparation and conduct of that sortie,” Maitre said.

Investigators also are reviewing maintenance records for the plane.

Maitre described the U-28A as reliable, saying that type of aircraft is used thousands of hours a year and that crew members fly hundreds of hours annually to maintain their proficiency with the plane and its systems.

Officials said that use of the Clovis airport was part of the training mission, but additional information on the mission and circumstances of the crash itself were not immediately available.

The crash caused a fire that was extinguished by local firefighters, officials said.

Two large pieces of the aircraft, including the tail section, were visible Wednesday morning at the crash scene.

“We are deeply saddened by this loss within our Air Commando family,” Maitre said. “Our sympathies are with the loved ones and friends affected by this tragedy, and our team is focused on supporting them during this difficult time.”

Cannon has about 5,800 military personnel and civilian employees.

It has been several years since the base has had a fatal crash, Maitre said.

The last deadly crash involving a U-28A occurred in Africa in 2012 as the plane was returning from an intelligence, surveillance and reconnaissance mission for the war in Afghanistan. Four airmen were killed.

An Air Force fact sheet says that the U-28A is used for tactical airborne intelligence, surveillance and reconnaissance in support of special operations forces. The plane typically has a four-member crew of two pilots, a combat systems officer and a tactical systems officer.

According to the fact sheet, the U-28A “evolved from commercially available aircraft that were purchased and then modified with communications gear, aircraft survivability equipment, electro-optical sensors, and advanced navigation systems.”