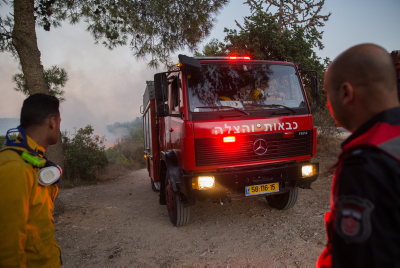 Two people were killed and five injured in a blaze at a fireworks warehouse in the Sharon region on Tuesday, police said.

Video footage showed a series of furious explosions as thousands of fireworks erupted in rapid succession. The roof of the warehouse was ripped off and nearby buildings were damaged in Moshav Porat.

Police spokesman Micky Rosenfeld said that of the five injured, one was in serious condition. Forensic units were scouring the area for evidence of how the blaze began, he said.

Thick, black smoke was visible for miles around, and a series of further explosions took place as fire spread throughout the warehouse.

Not everyone who was believed to have been in or around the warehouse has been accounted for, and police and firefighting teams were crawling through the badly damaged building, searching for individuals who may be trapped inside. Firefighters said they did not know when the situation would be brought under control, as the blaze continued to burn into the afternoon.

Dozens of firefighters were battling the ensuing blaze, and homes and farms on Moshav Porat in the Tel Mond area were evacuated for fear that the fire could spread. The Israel Electric Company shut down power on a high-tension wire in the area, in order to prevent further spreading of the fire. While investigators have not yet begun assessing the damage, witnesses said that dozens of homes and buildings were damaged, some of them badly, due to the force of the explosion.

Witnesses said that the initial explosion “felt like an earthquake,” with broken windows and objects inside houses falling to the floor due to the force of the explosion. The warehouse is a legal facility used to store fireworks that are used for celebrations and events that are licensed to use the explosives. Police have promised a thorough investigation to determine the cause of the explosion.