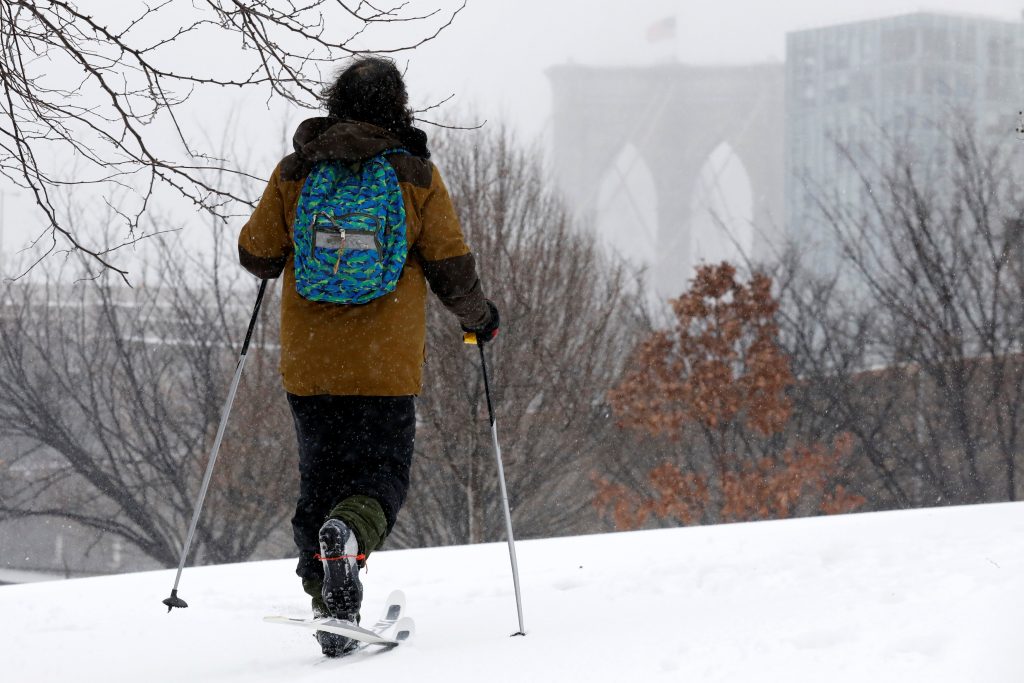 A blustery late-season storm clobbered the Northeast with sleet and heavy snow Tuesday, crippling much of the Washington-to-Boston corridor, after a stretch of unusually mild winter weather that had people thinking spring was already here.

The powerful nor’easter unloaded one to two feet of snow in places, grounded more than 6,000 flights, knocked out power from nearly a quarter-million customers from Virginia northward and, by the time it reached Massachusetts, had turned into a blizzard, with the wind gusting at nearly hurricane force over 70 mph along the coast and waves crashing over the seawalls.

It was easily the biggest storm in a merciful winter that had mostly spared the Northeast.

While people mostly heeded dire warnings to stay home and off the roads, police said a 16-year-old girl was killed when she lost control of her car on a snowy road and hit a tree in Gilford, New Hampshire.

Philadelphia and New York City escaped the brunt of the snow, getting just a few inches and not the foot or more that forecasters had expected before the storm switched over mostly to sleet. In New Jersey, which saw rain or just a little snow in many areas, Gov. Chris Christie called the storm an “underperformer.” But officials warned of dangerous ice.

Inland areas, meanwhile, got hit hard. Binghamton, New York, had 22 inches by mid-afternoon, while more than a foot fell in Harrisburg, Pennsylvania. Vernon, New Jersey, got at least 19 inches, and Monterey, Massachusetts, 15, with snow still accumulating in the afternoon. Up to a foot was expected in the Boston area.

The storm came just days after the region saw temperatures climb into the 60s, and less than a week before the official start of spring. February, too, was remarkably warm.

“The winters seem to be upside down now. January and February are nice and then March and April seem to be more wintry than they were in the past,” said Bob Clifford, who ventured out on an early morning grocery run for his family in Altamont, near Albany, New York.

His advice: “Just hide inside. Hibernate.”

In the nation’s capital, non-essential federal employees were given the option of reporting three hours late, taking the day off or working from home. The city got less than two inches of snow.

A few days ago, workers on Washington’s National Mall were making plans to turn on the fountains.

“Obviously all that has to come to an abrupt stop until we get all the snow cleared,” said Jeff Gowen, the acting facility manager for the National Mall and Memorial Parks. “The cherry blossoms, they’re right on the cusp of going into bloom here. I had a feeling this was going to happen.”

Kelly Erskine, a 28-year-old coffee shop manager from Whitman, Massachusetts, about 25 miles south of Boston, made it almost all the way through the winter without a shovel. She went to Wal-Mart on Tuesday morning to get one.

“I live in an apartment complex and they usually take care of the shoveling, but they sent a letter to us and said, ‘Expect a lot of snow.’ I knew from the letter that I’d have to go out and buy a shovel,” she said.

In northeastern Pennsylvania, snowplows and state troopers escorted a 23-month-old child in need of a heart transplant 80 miles between hospitals. Gov. Tom Wolf said the youngster made the trip safely.

In Narragansett, Rhode Island, high winds buckled a state-owned wind turbine. In New York City, two homes under construction collapsed near the waterfront in Far Rockaway. No injuries were reported.

And two ponies broke out of their stables and roamed the snowy streets of Staten Island until an off-duty police officer wrangled them with straps normally used to tow cars and tied them to a lamppost. They were taken back to the stables.

The storm coincided with New Hampshire’s Town Meeting Day, a Yankee tradition in which voters in more than 100 communities elect local politicians and set budgets.

Some towns postponed this because of the snow. But in Hopkinton, a steady stream of voters braved the blustery conditions to make it to the polls.

The flight cancellations included nearly 3,300 in the New York City area alone. Hundreds of passengers were stranded at airports.

Laura and Matthew Balderstone of West Yorkshire, England, intended to spend their honeymoon in Florida but found themselves stuck at the Newark, New Jersey airport and couldn’t find a hotel room.

“It’s better safe than sorry, especially flying. I suppose it’s a shame that we can’t get another way around this,” Matthew Balderstone said. “It’s just the way it is, unfortunately.”