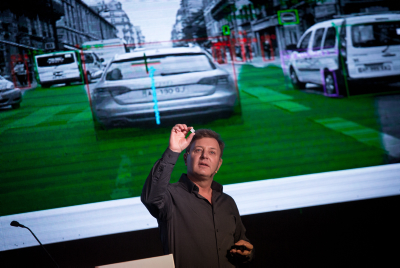 After the Bank of Israel managed to rein in the shekel’s march on the dollar last week, buying up greenbacks to raise the value of the dollar against the Israeli currency, it faced a new challenge this week — one that the central bank may not be able to so easily overcome. In the wake of Monday’s announcement on the buyout of Mobileye by Intel, the dollar lost half a percent against the shekel, despite the U.S. currency’s general strength against other currencies — and that could be just the beginning, according to foreign-currency-trading experts FXCM Israel.

“The Mobileye deal is likely to attract more investors to Israel,” as the “smart money” seeks out other Israeli tech investments. “The rush of investments is likely to further increase the value of the shekel,” the firm said, citing what it calls the “Mobileye Effect, which has been raising consciousness among investors around the world in the wake of the biggest tech deal in Israel’s history, and in Intel’s history as well.”

According to an announcement by Intel, the company is set to buy all outstanding ordinary shares of Mobileye for $63.54 per share in cash, representing an equity value of approximately $15.3 billion and an enterprise value of $14.7 billion. That sum is larger than the military and defense budgets for Israel. The state is likely to take in well over a billion dollars in taxes, money that will go to close budget holes and lower taxes.

The dollar has again fallen to the NIS 3.66/dollar level, after massive purchases of dollars last week brought the greenback to the NIS 3.70 level. With the resources of Intel behind it, Mobileye will be expanding — doubling its office space and its workforce — and the new clout that the company has as part of the world’s largest maker of microprocessors makes Israel a center of auto technology, and especially self-driving vehicle tech. That is likely to attract more multinationals to Israel to invest in that area — already, several carmakers, including GM and Hyundai, have research and development offices and facilities in Israel — and bring with them more cash.

Last week, analysts cited the announcement that the Leviathan gas field would soon begin exporting natural gas as a factor in the shekel’s strength along with the economy’s overall positive performance. “The shekel is likely to continue appreciating in the coming months,” the analysts said. “It is hard to argue with the factors that are contributing to this, including a current account surplus of 3.9 percent in 2016, and an increase in real investments of some 3 percent during the year. Israel is also benefiting from positive investments, especially in the technology sector.”

Add to that receipts from sales of natural gas that are starting to pour in. Israelis, the analysts said, need to get used to the idea that their currency is among the world’s strongest, and is likely to remain that way for some time to come. Whether the Bank will engage in more dollar buying or throw in the towel to what appears to be an irresistible force — the strength of the Israeli economy — remains to be seen.

If there was one “ray of light” for the Bank in its struggle to keep the shekel down, it was the likelihood that the U.S. Federal Reserve will decide to increase interest rates after it meets on Tuesday and Wednesday. That announcement will come at 2 p.m. Wednesday, New York time, and the Fed is widely expected to raise interest rates by a quarter percent. While that, not too long ago, would have been enough to accelerate the dollar’s value and a plunge in the shekel, that is not likely to be the case this time, said FXCM.

“It appears that the scenario of a quarter-point increase in interest rates has already been factored into the markets and into the current value of the dollar,” the analysts said. “However, there is a strong danger that the dollar will plunge, and not only against the shekel, if U.S. interest rates are not raised.”