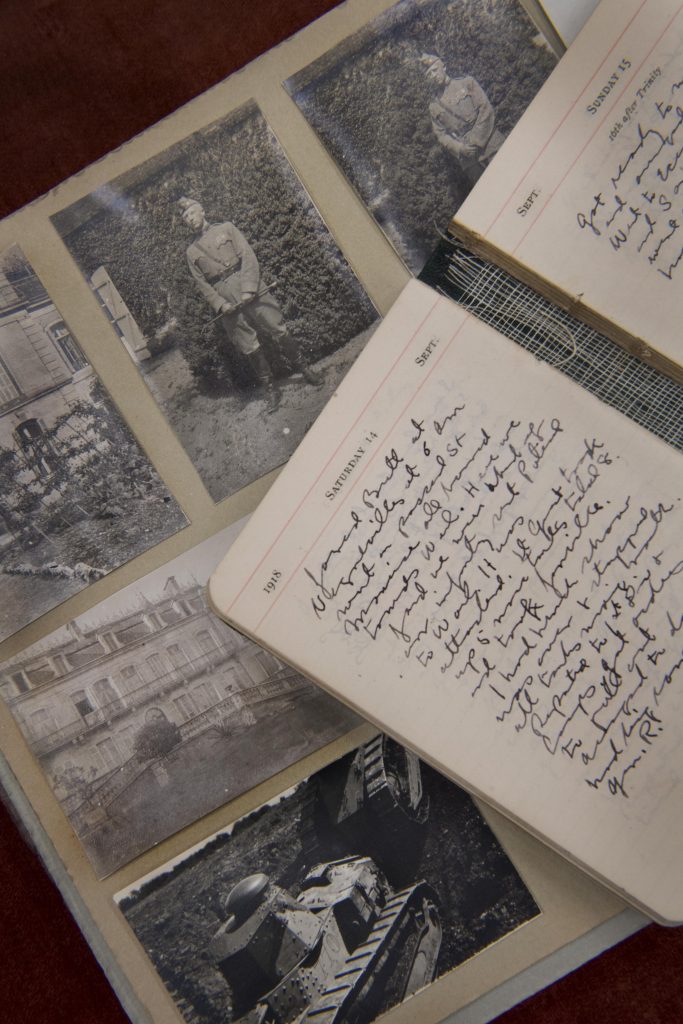 Army officer George S. Patton Jr. was pinned down by German machine gun fire. His tanks were scattered, and many of his men had been hit. Armed only with his revolver, he was afraid to go forward, but knew he couldn’t go back.

Trembling, and fighting the urge to run, he looked up and seemed to see his warrior ancestors watching from the clouds. Suddenly calm, he realized he was about to give his life, like his Patton kin in the Civil War.

He rose, made for the enemy lines and was felled by a machine gun bullet.

It was Sept. 26, 1918. And the future World War II hero was then a 32-year-old lieutenant colonel, his fame and notoriety years ahead. Yet it was that fall, near the end of World War I, in northeastern France, that scholars say the combat legend of George Patton was born.

Next month, the Library of Congress will open a major exhibit on World War I that touches on the role that the war played in the life of Patton, who is best known as a brilliant but controversial general in the Second World War.

“It is surprising,” said Sahr Conway-Lanz, a manuscript historian at the library. “Most people think of George Patton as a figure of World War II and don’t remember that (he) also fought in World War I.”

“This is where he gets his first experience . . . commanding tanks, which is what he’s known for in World War II,” he said.

It was during World War I that Patton became the first U.S. soldier assigned to the new tank corps, which he helped create. He built the Army’s first tank school from scratch. He helped come up with the tank corps’ original triangular, tricolor shoulder patch.

And it was during World War I that he was wounded in what remains the biggest battle in U.S. military history — the Meuse-Argonne offensive, which claimed the lives of 26,000 U.S. soldiers.

It may have been the only time that “Old Blood and Guts,” as he came to be known, shed blood on a battlefield. The bullet struck him in the upper left thigh and came out through his buttocks, just missing a crucial nerve and artery.

What was he trying to accomplish by charging the machine guns, biographer Martin Blumenson wondered. “Was he inviting the glory of death . . . on the field of battle? Was he fulfilling his destiny?”

Fellow biographer Carlo D’Este said Patton was defining himself in the “Great War.”

“I think it was the basis for what he did later,” he said in a telephone interview. “I’ve always thought, personally, that his accomplishments in World War I were more significant than almost what he did in World War II.”

The First World War was also where Patton showed some of the grim tendencies that would stain his image in World War II. During the latter war, he was condemned for striking and cursing soldiers suffering from battle fatigue.

Twenty-five years earlier, Patton bragged that he had struck a soldier over the head with a shovel because the man “would not work” during a trench-digging operation under fire.

He told his wife he thought the blow might have killed the man.

A few days earlier, he wrote to his father, he had spotted a soldier malingering in a shell hole and went to “cuss him out,” according to D’Este’s biography. When he reached the man, he discovered that the soldier had a bullet wound in his head and was dead.

The library’s exhibit, entitled “Echoes of the Great War: American Experiences of World War I,” opens April 4, two days before the 100th anniversary of the U.S. entry into the war.

Planned for a gallery in the library’s Jefferson Building, across the street from the U.S. Capitol, it will feature hundreds of rotating items — letters, music, film, posters, photographs and scrapbooks.

Two Patton items, from 100 boxes of his papers at the library, will be on exhibit: His pocket diary and a bleak poem called “Peace — November 11, 1918,” which he wrote lamenting the end of the war that day.

Patton is perhaps best known for his World War II feat of speeding his Third Army to relieve besieged Americans around the town of Bastogne, in Belgium, during the Battle of the Bulge.

D’Este called it his “finest hour.” Blumenson called it the “sublime moment of his career.”

Patton wrote that the German attack that produced “the bulge” in the allied lines in 1944 “reminds me of very much of . . . (a German offensive) in 1918, and I think will have the same results.” He was correct. The enemy was defeated.

Patton was profane, courageous, narcissistic and anti-Semitic, according to historians. He was disciplined, driven and thoughtful, and wrote voluminously.

But his achievements were marred, and his career ended, by lapses away from the battlefield, such as the slapping incidents, his rash public statements and his contempt for the war’s displaced Jews, whom he called “sub human” and “lower than animals.”

He believed in destiny, primarily his own, and reincarnation — claiming that, in past lives, he had been a warrior with the Romans, the Vikings and Napoleon, among others.

He believed he was watched over by his paternal grandfather and a great-uncle who were killed fighting for the Confederacy, according to D’Este’s biography. Although he was born in California, he had deep family roots in Virginia.

Patton also played polo, fenced and wrote a book of poetry, much of it about war.

“The more one sees of war, the better it is,” he wrote to a family friend after he arrived in Europe in 1917. “Of course there are a few deaths, but . . . the party is worth the price of admission.”

On Dec. 9, 1945, seven months after World War II ended in Europe, Patton suffered a broken neck in a car accident in Germany while headed out pheasant hunting.

He was paralyzed from the neck down and succumbed twelve days later, at the age of 60.

The day after his death, The Washington Post noted, “The curtain has now rung down on a man who was made for no other purpose than for war.”