Laziness Isn’t Why People Are Poor, iPhones Aren’t Why They Lack Health Care. 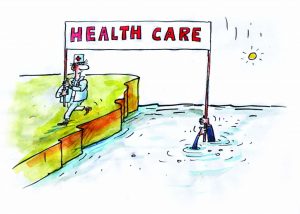 In response to a question about his party’s plan to increase the cost of health insurance, Rep. Jason Chaffetz, R-Utah, suggested that people should “invest in their own health care” instead of “getting that new iPhone.” He doubled-down on the point in a later interview: “People need to make a conscious choice, and I believe in self-reliance.” Of course, Chaffetz is wrong. But he isn’t alone.

He has been met with justifiable derision for the comparison (The Washington Post’s Christopher Ingraham did the math, pointing out that a year’s worth of health care would equal 23 iPhone 7 Pluses in price.) But the claim he is making is hardly new. Chaffetz was articulating a commonly held belief that poverty in the United States is, by and large, the result of laziness, immorality and irresponsibility. If only people made better choices — if they worked harder, stayed in school, got married, didn’t have children they couldn’t afford, spent what money they had more wisely and saved more — then they wouldn’t be poor, or so the reasoning goes.

This insistence that people would not be poor if only they would try harder defines the thinking behind the signature welfare restructuring law of the Clinton era, the Personal Responsibility and Work Opportunity Reconciliation Act. It’s the logic at the heart of efforts to impose work requirements on Medicaid recipients, to drug-test people collecting unemployment insurance or to forbid food stamp recipients to buy steak. …

Since the invention of the mythic welfare queen in the 1960s, this has been the story we most reliably tell about why people are poor. Never mind that research from across the social sciences shows us, over and again, that it’s a lie. Never mind low wages or lack of jobs, the poor quality of too many schools. … Never mind the fact that the largest group of poor people in the United States are children. Never mind the grim reality that most American adults who are poor are not poor from lack of effort but despite it.

This deep denial serves a few functions, however.

To accept this as reality is to confront the unpleasant fact that myths of American exceptionalism are just that — myths — and many of us would fare better economically (and live longer, healthier lives, too) had we been born elsewhere. That cognitive dissonance is too much for too many of us, so we believe instead that people can overcome any obstacle if they would simply work hard enough.

Second, to believe that poverty is a result of immorality or irresponsibility helps people believe it can’t happen to them. But it can happen to them (and to me and to you). Poverty in the United States is common, and according to the Census Bureau, over a three-year period, about one-third of all U.S. residents slip below the poverty line at least once for two months or more.

Third — and conveniently, perhaps, for people like Chaffetz or House Speaker Paul D. Ryan, R-Wisconsin — this stubborn insistence that people could have more money or more health care if only they wanted them more absolves the government of having to intervene and use its power on their behalf. In this way of thinking, reducing access to subsidized health insurance isn’t cruel, it’s responsible, a form of tough love in which people are forced to make good choices instead of bad ones. This is both patronizing and, of course, a gross misreading of the actual outcome of laws like these.

There’s one final problem with these kinds of arguments, and that is the implication that we should be worried by the possibility of poor people buying the occasional steak, lottery ticket or, yes, even an iPhone. Set aside the fact that a better cut of meat may be more nutritious than a meal Chaffetz would approve of, or the fact that a smartphone may be your only access to email, job notices, benefit applications, school work and so on. Why do we begrudge people struggling to get by the occasional indulgence? Why do we so little value pleasure and joy? Why do we insist that if you are poor, you should also be miserable? Why do we require penitence?

Just because what Chaffetz is saying isn’t novel doesn’t mean it isn’t uninformed and dangerous. Chaffetz, Ryan and their compatriots offer us tough love without the love, made possible through their willful ignorance of (or utter disregard for) what life is actually like for so many Americans who do their very best against great odds and still, nonetheless, have little to show for it. Sometimes not even an iPhone. n (The Washington Post)