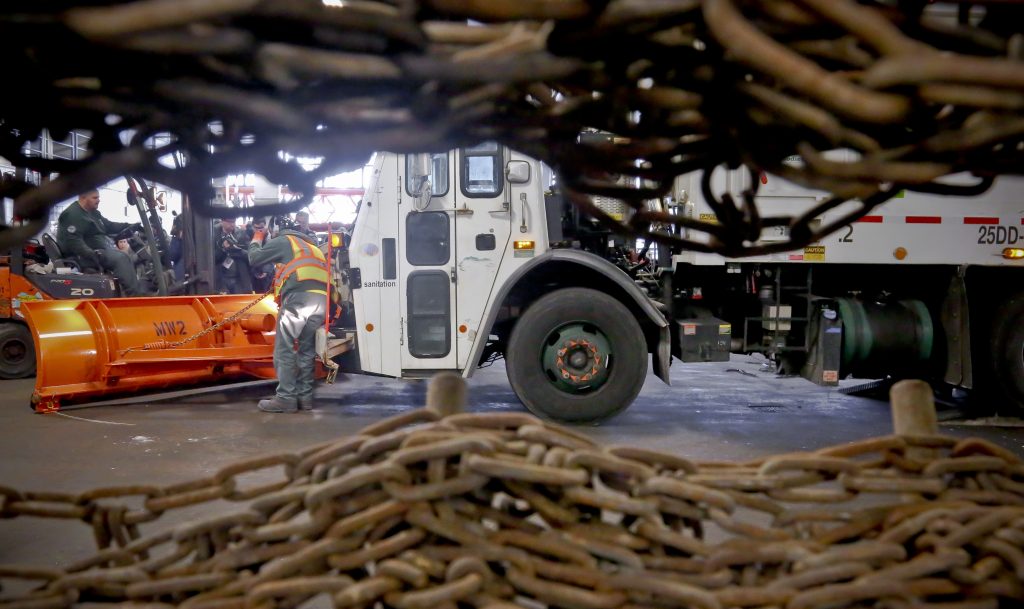 Preparations continued Monday across the Northeast for the arrival of what forecasters say will be the first major winter storm of the season, bringing with it dire warnings of blizzard conditions in New Jersey, New York and Connecticut.

School systems announced closures, airlines canceled waves of flights and officials across the Mid-Atlantic and New England urged people to stay off the roads in the face of a possibly massive storm.

According to the Capital Weather Gang, at least a foot of snow is in the forecast from Philadelphia to Maine, a packed swath of the country encompassing millions of people, miles of highly trafficked roadways and some of the country’s busiest airports.

Forecasts called for as much as two feet of snow in New York City, which is under a blizzard warning through midnight on Tuesday, according to the National Weather Service.

“Falling and blowing snow with strong winds and poor visibilities are likely,” the service said in a warning Monday morning. “This will lead to whiteout conditions . . . making travel extremely dangerous. Do not travel. If you must travel . . . have a winter survival kit with you.”

In New York City, where forecasts call for as much as 4 inches of snowfall per hour on Tuesday, officials issued a hazardous travel advisory and urged people to stick with mass transit.

“We’re preparing for a significant storm on Tuesday, and New Yorkers should also prepare for snow and dangerous road conditions,” Mayor Bill de Blasio, D, said in a statement.

All public schools in New York City were going to be closed Tuesday, the city’s Department of Education said. Authorities sent 689 salt spreaders across the city, and when the snow accumulation tops two inches, more than 1,600 plows will be deployed, according to the New York City Emergency Management Department.

New York Gov. Andrew Cuomo, D, said he plans to activate the state’s emergency operations center on Monday night and will send out extra state police patrols during the storm. His office also warned that the Metropolitan Transportation Authority, which operates the subways in New York City, could limit or cancel rail service entirely, depending on how severe the storm is.

Airlines were already preparing for the snowfall, scrapping planned flights as well as fees for travelers who need to book new tickets. More than 4,000 flights scheduled for Tuesday had been canceled as of Monday afternoon, most of them heading to airports around New York, Washington, Boston and Philadelphia, according to FlightAware.com.

JetBlue, Delta and American airlines have begun warning travelers of looming flight disruptions for a host of cities through Wednesday and have said that travelers can waive change fees.

Officials with American Airlines said they expected to resume flight operations Wednesday morning. All American flights out of Boston’s Logan Airport on Tuesday also were cancelled with plans to resume operations on Wednesday, while in Philadelphia, flights before 5 p.m. were canceled.

Blizzard warnings also stretched into New Jersey, while winter storm warnings were expanded into Maryland. The National Weather Service warned of potential coastal flooding in New Jersey and Delaware, while also saying that “significant snowfall” is expected across much of eastern Pennsylvania and New York.

Massachusetts Gov. Charlie Baker, R, said that the emergency operations center there would open Tuesday morning, and he echoed other public officials in urging people to stay off of the roads. Boston city officials shuttered their public schools Tuesday.

In Pennsylvania, state authorities said they are prepared for days of possible snow, beginning with the storm’s arrival Monday night and extending through snow showers on Wednesday.

“State agencies are taking proactive steps to ensure Pennsylvania is ready for the incoming winter weather and Pennsylvanians should take their own precautions and prepare for adverse conditions, especially for travel,” Gov. Tom Wolf, D, said in a statement.

Eastern Massachusetts could see up to 18 inches of snow, with the flakes falling on Tuesday morning, and pummeling gusts up to 55 mph could arrive as well, the weather service forecast.

Boston and other cities in that area have a blizzard watch Tuesday afternoon through evening, with between 12 and 18 inches expected, and a forecast that warned of “heavy snow and the potential for blizzard conditions.”