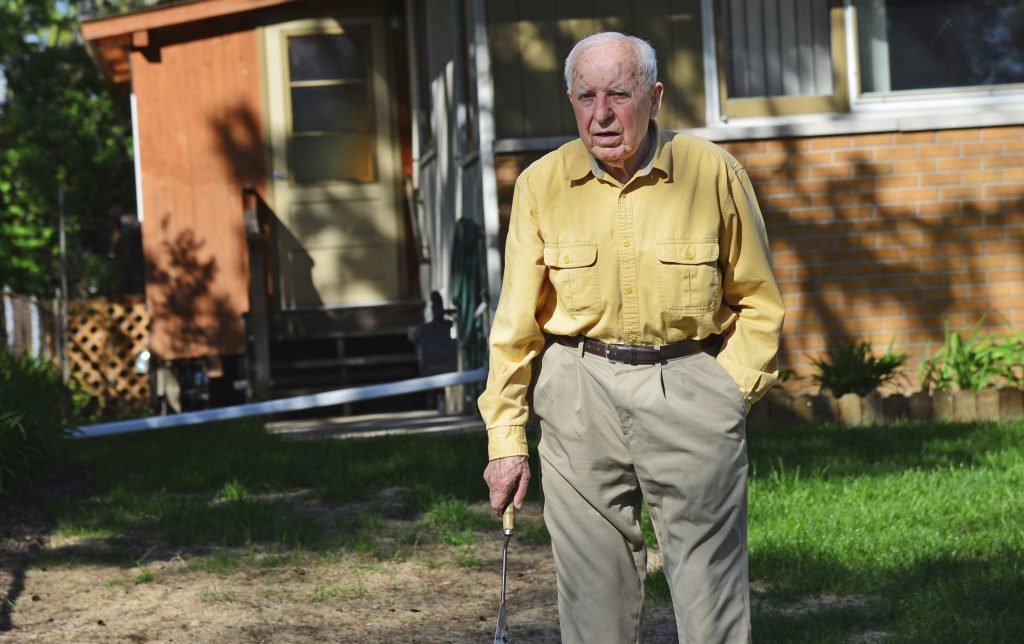 Poland will seek the arrest and extradition of a Minnesota man exposed by The Associated Press as a former commander in an SS-led unit that burned Polish villages and killed civilians in World War II, prosecutors said Monday.

Prosecutor Robert Janicki said evidence gathered over years of investigation into U.S. citizen Michael K. confirmed “100 percent” that he was a commander of a unit in the SS-led Ukrainian Self Defense Legion.

He did not release the last name in line with privacy laws, but the AP has identified the man as 98-year-old Michael Karkoc, from Minneapolis.

“All the pieces of evidence interwoven together allow us to say the person who lives in the U.S. is Michael K., who commanded the Ukrainian Self Defense Legion, which carried out the pacification of Polish villages in the Lublin region,” Mr. Janicki said.

The decision in Poland comes four years after the AP published a story establishing that Michael Karkoc commanded the unit, based on wartime documents, testimony from other members of the unit and Mr. Karkoc’s own Ukrainian-language memoir.

Mr. Karkoc’s family has repeatedly denied he was involved in any war crimes and his son questioned the validity of the evidence against him after Poland’s announcement, calling the accusations “scandalous and baseless slanders.”

“There’s nothing in the historical record that indicates my father had any role whatsoever in any type of war crime activity,” said Andriy Karkoc.

He questioned the Polish investigation, saying “my father’s identity has never been in question nor has it ever been hidden.”

In Poland, prosecutor Andrzej Pozorski said Karkoc would be given a full opportunity to tell his story.

“This person has not been questioned in the capacity of a suspect so it is hard to react to his explanations, because we don’t know them,” said Pozorski who heads the investigative team at a state institute.

Prosecutors with the state National Remembrance Institute, which investigates Nazi and Communist-era crimes against Poles, have asked a regional court in Lublin to issue an arrest warrant for Mr. Karkoc. If granted, Poland would seek his extradition, as Poland does not allow trial in absentia, Mr. Janicki said.

“The prosecutor in Lublin intends to direct a motion to the U.S. justice authorities asking that the suspect … be handed over to Poland,” the institute said in a statement.

Mr. Janicki added the man’s age was no obstacle in seeking to bring him before justice.

“He is our suspect as of today,” Mr. Janicki said.

If convicted of contributing to the killing of civilians in 1944, Mr. Karkoc could face life in prison.

The U.S. attorney’s office in Minnesota declined to comment on the case.

Efraim Zuroff, the head Nazi hunter for the Simon Wiesenthal Center, applauded the decision as an important signal even at this late stage.

“Any legal step that’s taken against these people is very important,” he said by telephone from Jerusalem. “It sends a very powerful message, and these kinds of things should not be abandoned just because of the age of a suspect.”

Pozorski, in Warsaw, shared this view.

“This case shows that there is still a possibility, a chance to bring those responsible before a court, and I think we should never give up the chance of exercising justice.”

Prosecutors in Germany shelved their own investigation of Mr. Karkoc in 2015, after saying they had received “comprehensive medical documentation” from doctors at the geriatric hospital in the U.S. where he was being treated that led them to conclude he was not fit for trial.

Mr. Zuroff urged that he be reassessed by independent doctors.

“It is a very common occurrence that elderly individuals facing prosecution for World War II crimes make every effort to look as sick and as infirm as possible,” he said.

The investigations in Germany and Poland began after AP’s story in June 2013, which established Mr. Karkoc was a commander of the unit and then lied to American immigration officials to get into the United States a few years after the war.

A second report uncovered evidence that Mr. Karkoc himself ordered his men in 1944 to attack a Polish village in which dozens of civilians were killed, contradicting statements from his family that he was never at the scene.

“The Associated Press stands by its stories, which were well-documented and thoroughly reported,” said Lauren Easton, director of AP’s media relations, on Monday.

The second story, based upon an investigative file originally from the Ukrainian intelligence agency’s archive, revealed that a private under Mr. Karkoc’s command testified in 1968 that Mr. Karkoc ordered an assault on the village of Chlaniow in retaliation for the slaying of the SS major who led the Legion, in which Mr. Karkoc was a company commander.

A German roster of the unit confirmed that Pvt. Ivan Sharko, a Ukrainian, served under Karkoc’s command at the time.

Other eyewitness accounts, both from villagers and members of Karkoc’s unit, corroborated the testimony that the company set buildings on fire and gunned down more than 40 men, women and children.

Other soldiers who served under Karkoc backed up Sharko’s testimony about civilian killings.

Pvt. Vasyl Malazhenski, for example, told Soviet investigators that in 1944 that unit was directed to “liquidate all the residents” of Chlaniow — although he did not say who gave the order.

Sharko also testified in the investigative documents that Karkoc’s company was directly involved in a “punitive mission” against Poles near the village of Sagryn in 1944.