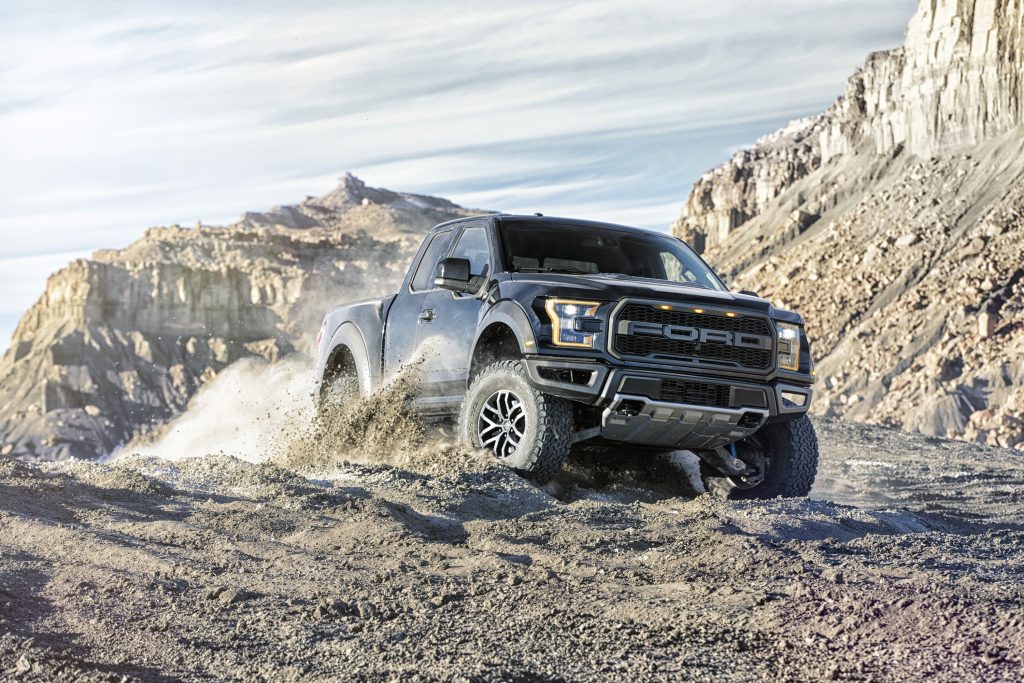 Ford’s F-150 has been America’s bestselling truck for 40 straight years and its bestselling vehicle for 30. Despite all the Accords and Priuses that dominate the West Coast, this is the country’s most popular mode of transportation.

The Raptor is the high-performance, off-road version of the F-150. It’s not a monster truck, but it’s a truck, and it’s a monster.

Ford introduced the first Raptor in 2010 and has held off the second generation until now. It was worth the wait, and the weight: Using new principles that Ford developed for its entire line, the 2017 F-150 Raptor is quicker, more powerful and 500 pounds lighter than its predecessor.

The more powerful punch increases the truck’s towing capacity by 2,000 pounds and increases the fuel economy by 23 percent, according to Ford. The company says there’s a 22 percent increase in the torque-to-weight ratio, too.

A drive around town reveals some of the Raptor’s talents. Although it sits higher and wider than the traditional F-150, the Raptor Supercab has a shorter wheelbase. It accelerates easily — thank you, torque — and corners well. Equipped with a lot of glass and a very good rearview camera, it’s even easy to parallel park.

The half-doors open to expose a rear seat with fair legroom and headroom or plenty of cargo space. (A Supercrew version features four full doors, and even more cargo space, but also rides 12 inches longer in the wheelbase.)

In the city and on the highway, the Raptor is well-behaved. For a car with such a powerful engine, and strapped with such meaty 17-inch wheels, it’s pleasantly quiet, even at full freeway speed.

Designed more for work than for commuting, it doesn’t have a lot of creature comforts in the cabin. There are only two cupholders, set between the front seats; but there is ample storage space in the doors, the center console and the glove compartment.

These contain a wealth of electronic support, too, including several plug-in spots for small devices, a 12-volt plug-in for larger ones, and even a 110-volt/400-watt AC plug for bigger gear.

That’s not counting the six auxiliary “upfitter” switches above the driver’s head, which can be used to operate after-market add-ons such as external fog lights, tow winches or the sort of roof lights you only see during times of trouble — those used by tow truck companies and law enforcement agencies.

A full appreciation of the Raptor requires dirt. So, doing my due diligence, a friend and I strapped two motorcycles into the 5.5-foot bed and headed off-road.

While I did not test the truck at Baja level — 100 miles per hour in deep sand, through rock gardens or airborne over jumps — I did give it a pretty good shakedown cruise.

At 60 miles an hour, on a dirt road, over washboard and ruts left by recent rains, the Raptor was Cadillac-comfy, as quiet and restrained as it had been at the same speed on the highway.

The smooth ride is due in part to the Baja-ready suspension, which offers a stellar 14 inches of travel in the rear and 13 inches up front. That’s about 6 inches front and rear better than a standard F-150 with Ford’s off-road package, and more than enough to manage the humps and bumps we encountered.

Though the drive to our riding spot didn’t involve any climbing, it did include some washouts and one massive mud puddle. Eager to see how the Raptor would manage the sticky stuff, I drove into the deepest section, stayed in two-wheel drive and waited to see who would win.

The mud won. After a slight attack of anxiety, and a bit of inelegant wheel spinning that dug the mud hole a little deeper, I shifted into four-wheel-drive and let the Raptor extricate itself.

It’s good at that sort of thing, and engineered for it. Transmission selections on the steering wheel include Normal, Sport, Weather, Mud/Sand, Rock Crawl and Baja. I played around with several of these, but couldn’t find any terrain that really challenged them.

Customers looking for reasons not to buy a Raptor will find them. The truck comes with only one engine — though presumably it could be fitted with the diesel engine that Ford has promised to put in its 2018 F-150s — and only the short bed size.

Also, all that off-road readiness comes at a price, especially for truck shoppers who have seen F-150s advertised from $27,000.

The Raptor is available in a basic version from $49,520. The model I drove was equipped with $12,560 in amenities. The priciest of these were those included in the Raptor Technology Package and Equipment Group 802A, which boosted the suggested retail price by adding heated and ventilated front seats, beefier front and rear axles, a 360-degree camera, trailer control monitoring, remote start, LED lighting in the bed, side mirror spotlights, adaptive cruise control and more.

There are also a few things missing. Even dressed up with all that technology, the Raptor doesn’t offer rain-sensing windshield wipers as standard equipment, though that’s become a fairly common feature in mid-priced cars. (It is available as part of a complex additional package of upgrades.)

I found the driver’s seat difficult to get into a comfortable position, despite the multiple ways in which it can be adjusted.

Also, it has an intrusive automatic start-stop system but still gets the sort of fuel economy that will be very painful when fuel prices rise again.

Although the Environmental Protection Agency set the combined city-highway fuel consumption at 16 miles per gallon, the onboard computer said the best I could do — driving at the speed limit on the highway, carrying a relatively small load — was more than 2 mpg below that. My high number was 13.6 and my average was nearer to 12, even with that stop-start turning the engine off at every stop light.

Ford doesn’t count on selling that many Raptors as part of the more than 800,000 F-150s it will sell this year.

But judging from the many thumbs-up I received driving the Raptor around town for a week, the company won’t have trouble selling the ones it builds.

Highs: Smooth on the highway, durable in the dirt