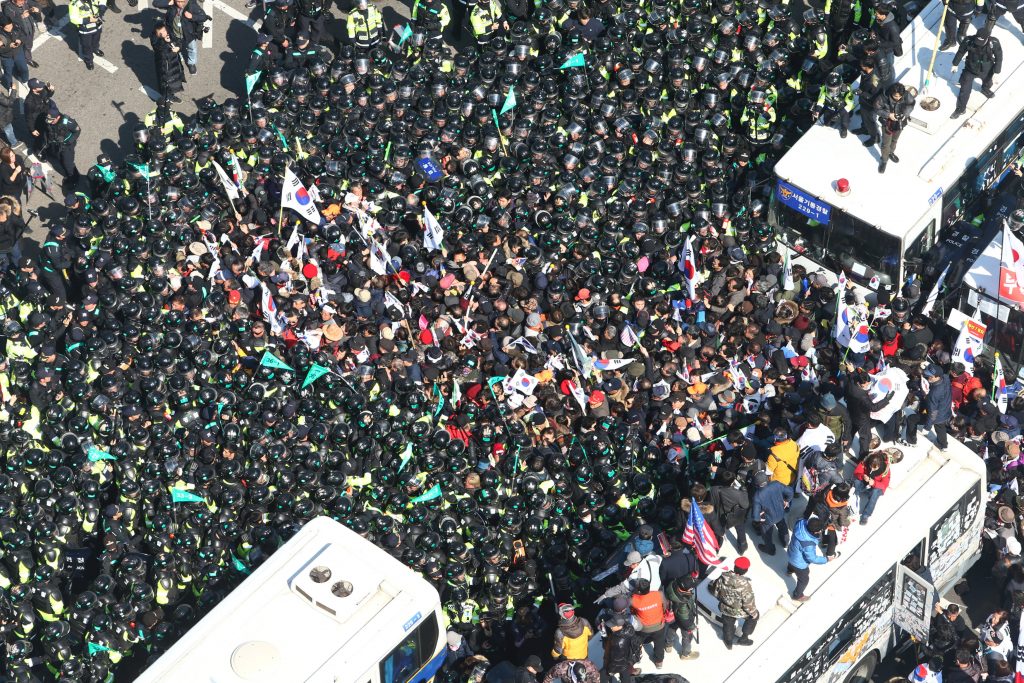 South Korea’s Constitutional Court removed President Park Geun-hye from office on Friday over a graft scandal involving the country’s conglomerates, sparking protests from her supporters, two of whom were killed in clashes with police.

Park becomes South Korea’s first democratically elected leader to be forced from office, capping months of paralysis and turmoil. Her ouster comes amid rising tension with North Korea and China, and the corruption scandal has also landed the head of the Samsung conglomerate in jail.

A presidential election will be held within 60 days.

After the verdict, hundreds of Park’s supporters outside the court tried to break through police barricades and two of them died, police said. One elderly man was taken to hospital with a head injury and the circumstances of the second death were being investigated.

The court’s acting chief judge, Lee Jung-mi, said Park had violated the constitution and law “throughout her term,” and despite the objections of parliament and the press, she had concealed the truth and cracked down on critics.

“The removal of the claimee from office is overwhelmingly to the benefit of the protection of the constitution. … We remove President Park Geun-hye from office,” Lee told the hearing.

The ruling to uphold parliament’s Dec. 9 vote to impeach her over the scandal marks a dramatic fall from grace of South Korea’s first woman president and daughter of Cold War military dictator Park Chung-hee. Both of her parents were assassinated.

She did not appear in court on Friday.

Park, 65, no longer has immunity as president, and could now face criminal charges over bribery, extortion and abuse of power in connection with allegations of conspiring with her friend, Choi Soon-sil.

Park was stripped of her powers after parliament voted to impeach her but has remained in the president’s official compound, the Blue House. A spokesman said on Friday she would leave and return to her private home in Seoul.

The Seoul market’s benchmark KOSPI index rose after the ruling. The top regulator has played down any negative impact on markets and the central bank is scheduled to hold an emergency meeting later on Friday.

“As the saga is coming to an end, markets will be relieved that South Korea finally can push forward to press ahead with electing new leadership,” said Trinh Nguyen, senior economist at Natixis in Hong Kong.

“The hope is that this will allow the country to have a new leader that can address long-standing challenges such as labor market reforms and escalated geopolitical tensions.”

Park was accused of colluding with her friend Choi and a former presidential aide, both of whom have been on trial, to pressure big businesses to donate to two foundations set up to back her policy initiatives.

The court said Park had “completely hidden the fact of [Choi’s] interference with state affairs.”

Park was also accused of soliciting bribes from the head of the Samsung Group for government favors, including backing a merger of two Samsung affiliates in 2015 that was seen as supporting the succession of control over the country’s largest “chaebol” conglomerate.

Samsung Group leader Jay Y. Lee has been accused of bribery and embezzlement in connection with the scandal and is in detention. His trial began on Thursday. He and Samsung have denied wrongdoing.

While Park’s supporters clashed with police outside the court, elsewhere in the city people welcomed her ouster. A recent poll showed more than 70 percent supported her impeachment.

Prosecutors have named Park as an accomplice in two court cases linked to the scandal, suggesting she is likely to be investigated and could face legal proceedings.

Prime Minister Hwang Kyo-ahn was appointed acting president and will remain in that post until the election. If Hwang resigns, as some media have speculated he may, in order to run for president, the finance minister will take over as acting president.

The U.S. State Department said it would continue to work with the acting president and whoever becomes the next president.

Relations with China and the United States could dominate the coming presidential campaign, after South Korea this month deployed the U.S. THAAD missile defense system in response to North Korea’s stepped up missile and nuclear tests.

China has vociferously protested against the deployment, fearing its sophisticated radar could see into its own missile deployments.

“She had one more year left as ‘president’ but, now she’s been ousted, she will be investigated as a common criminal,” the North’s state KCNA news agency said.