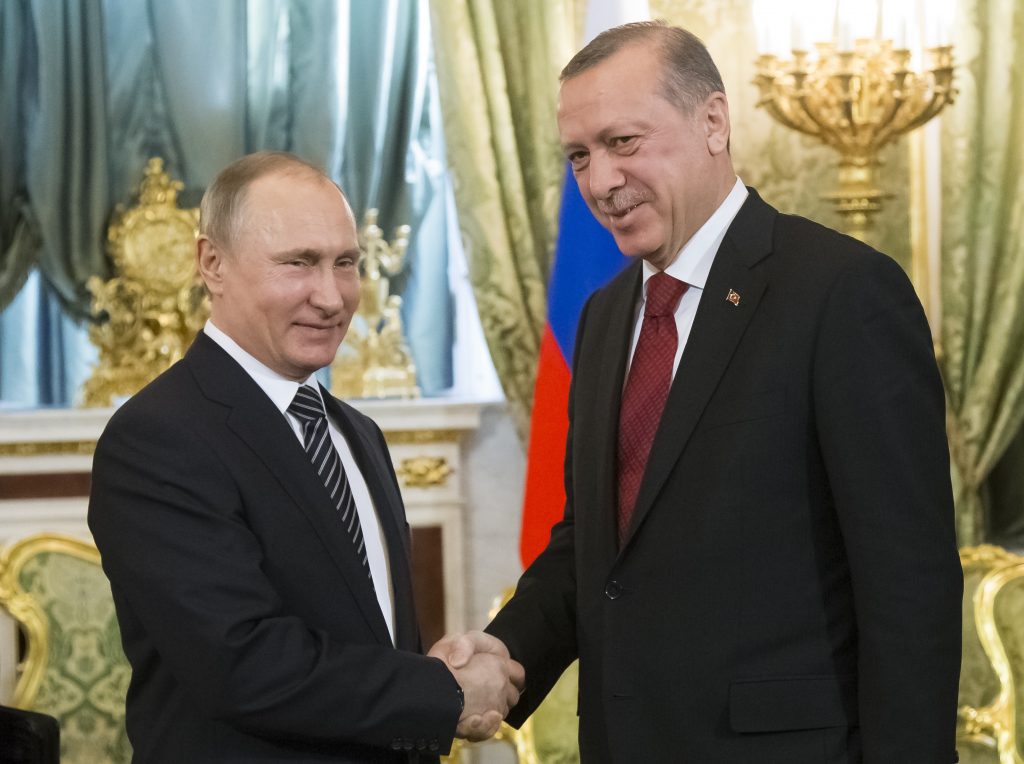 Russian President Vladimir Putin hailed the close ties between the Russian and Turkey militaries on Friday, as he hosted Turkish counterpart Recep Tayyip Erdogan for talks about Syria.

Russia and Turkey co-brokered a ceasefire in December that helped reduce the scale of fighting between Syrian President Bashar Assad and the opposition. They also co-sponsored two rounds of talks this year between Assad’s government and its foes. A third round is set for next week.

After concluding his meeting with Erdogan at the Kremlin, Putin hailed “efficient and close contact” between their militaries and intelligence agencies around Syria.

He said it was mostly “Russia and Turkey that have made a major contribution not only to securing a ceasefire between Syrian government forces and the armed opposition, but also to launching direct, concrete talks” between them.

Earlier this week, the chief military officers of Russia, the United States and Turkey met in the Turkish city of Antalya in an apparent attempt to work out additional steps to prevent future accidental deaths involving each other’s troops.

Asked by a reporter whether Moscow and Ankara shared the idea that Syria and Iraq should be preserved within current borders, Putin spoke of “the complex situation” and “contradictions” in the Syria peace talks.

But he insisted that preserving Syria’s territorial integrity is a “necessary condition for the full-scale peace settlement in this country.” Erdogan echoed the comments, saying that maintaining Syria’s current borders was Turkey’s “main goal.”

The cooperation on Syria between Russia and Turkey marked a sharp turnaround for the two nations, which have backed opposing sides in Syria, with Moscow siding with Assad and Turkey supporting his foes since the start of the Syrian conflict six years ago.

The conflicting interests led to the downing of a Russian warplane by a Turkish jet at the Syrian border in November 2015, which put the two nations on the verge of a direct military conflict. Moscow responded by barring the sales of package tours to Turkey and halting imports of agricultural products, moves that badly squeezed the Turkish economy.

Erdogan’s apologies for downing the plane helped rebuild ties, and Putin offered firm support to the Turkish leader in the wake of a botched coup last July.

Despite the rapprochement, Russia has moved gradually to lift economic restrictions, keeping some in place as an apparent motivator for Turkey. On the eve of the Kremlin talks, the Russian Cabinet allowed the imports of Turkish cauliflower and broccoli and a couple of other agricultural products.

Erdogan, who called the Russian leader his “dear friend,” urged Russia to lift all restrictions against Turkish business, restore visa-free travel and increase the number of commercial flights between the two countries.

During the Kremlin talks, he noted that plans for a prospective Russian natural-gas pipeline and a nuclear power plant in Turkey have also regained momentum. Both projects were put on hold amid the tensions following the Russian plane’s downing.