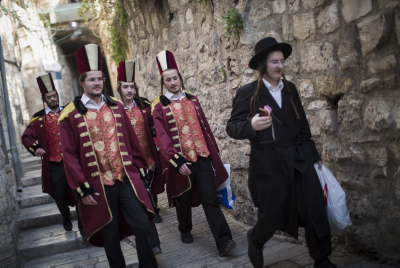 Thousands of police will be on duty over the weekend throughout the country, as Purim celebrations take place in the center of the country Motzoei Shabbos and Sunday, and in Yerushalayim on Shushan Purim, Sunday night and Monday. Hundreds of public Megillah readings, parties, children’s events, parades and other celebrations are scheduled all over the country. In the past, such events have proven attractive to terrorists, who seek to inflict as much damage on the civilian population of Israel as possible, police said.

A total closure was imposed on Palestinian Authority-controlled areas of Yehudah and Shomron beginning at midnight Thursday, and will continue through Tuesday morning. Checkpoints between Israel and Gaza will be closed as well. Special passage will be provided for individuals who require medical attention in Israeli hospitals.

Reports Thursday night said that Gaza Arab terrorists fired a missile at Israel’s Negev, but the missile missed its mark and fell inside Gaza. The Red Alert early warning system was not sounded, the IDF said.