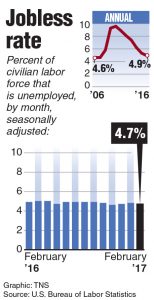 Employers added another burst of new jobs last month and stepped up the rate of pay for workers, a one-two punch that makes it likely that the Federal Reserve will nudge up interest rates next week.

Job growth totaled 235,000 in February, well above analysts’ expectations and on par with the payroll gains in January. The nation’s unemployment rate dropped a notch to 4.7 percent, the Labor Department said Friday.

The strong report reflects the rising confidence seen among businesses since late last year, despite the long period of relatively sluggish economic growth and many uncertainties in the outlook.

The unseasonably warm winter through much of the country probably helped boost hiring; the construction sector bulked up by 58,000 jobs, the most in a decade.

Manufacturers added a strong 28,000 jobs. There were also solid job gains in educational services, health care and professional businesses. The one sector that did not do well was retail trade, which shed 26,000 jobs last month.

Companies in manufacturing and other industries, including small firms, have become more optimistic, at least in part from expectations that favorable tax and regulatory policies will be coming from the Trump administration.

Trump has begun his presidency on a strong economic note, with financial markets reaching record levels and job growth seeming to get a second wind despite the nation being at or close to full employment.

The labor force expanded last month as more people were pulled into the job market. And the share of the working-age population who reported working last month reached 60 percent, the highest since February 2009, when the country was in a recession.

The unemployment rate now has been below 5 percent for 10 straight months. After 77 consecutive months of net job growth, the nation’s payrolls have grown by nearly 17 million. But it remains to be seen just how many more people will be entering or returning to the labor market and how much employers may need to bid up wages to entice them.

Despite the solid job growth in recent years, worker pay has increased at a stubbornly slow pace. But average earnings have been gaining some momentum in the last year. Hourly wages, on average, for all private-sector workers rose six cents last month, nothing exciting but still a little quicker than the prior month and up 2.8 percent from February of last year, a pace that is well above inflation.

If wages continue to climb faster, as many economists expect, that would most likely give a further push to inflation. Consumer prices have been growing at a very low rate for several years but recently have been creeping higher. Inflation is now approaching the Fed’s 2 percent target.

Friday’s jobs report is the last major piece of economic data before the Fed’s scheduled policy meeting Tuesday and Wednesday. Even before Friday, Fed Chairwoman Janet L. Yellen had signaled that the central bank was poised to lift its benchmark interest rate by a quarter-point next week, to a still-low range of 0.75 percent to 1 percent.

The new employment report means that is almost a done deal, barring any unforeseen disastrous event.