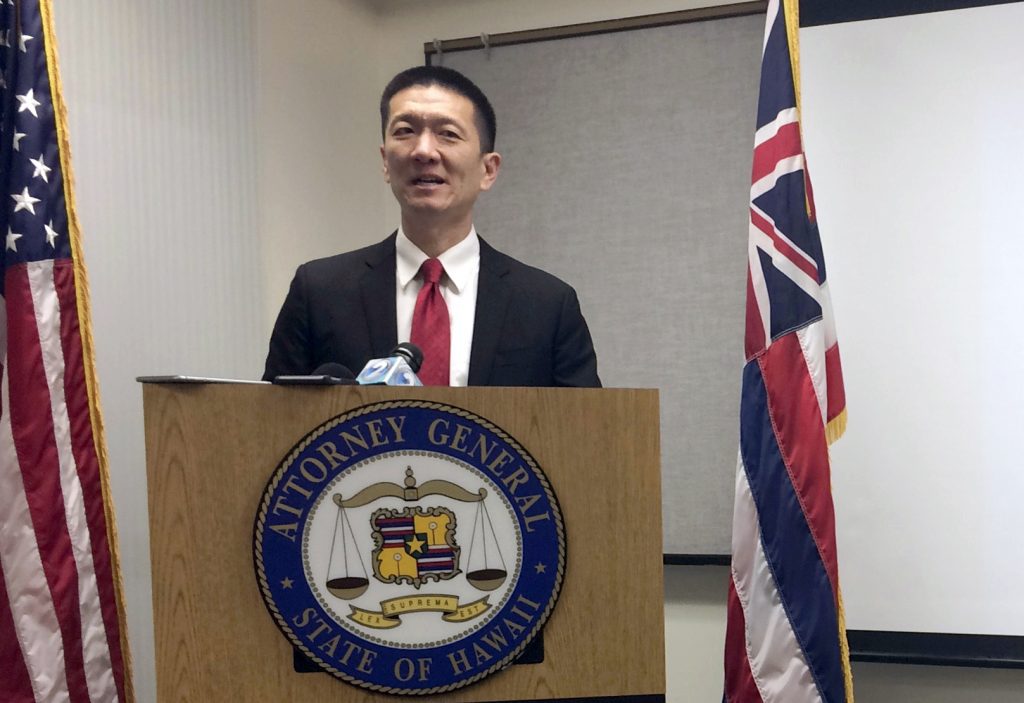 Hawaii has become the first state to file a lawsuit against President Donald Trump’s revised entry ban, saying the order will harm its Muslim population, tourism and foreign students.

Attorneys for the state filed the lawsuit against the U.S. government Wednesday in federal court in Honolulu. The heavily Democratic state had previously sued over President Trump’s initial travel ban, but that lawsuit was put on hold while other cases played out across the country.

Hawaii gave notice Tuesday night that it intended to file an amended lawsuit to cover the new ban, which is to go into effect March 16.

The revised executive order bars new visas for people from six predominantly Muslim countries and temporarily shuts down the U.S. refugee program. It doesn’t apply to travelers who already have visas.

“Hawaii is special in that it has always been non-discriminatory in both its history and constitution,” said Attorney General Douglas Chin, whose office has also asked for a temporary restraining order against the ban. “Twenty percent of the people are foreign-born, 100,000 are non-citizens and 20 percent of the labor force is foreign-born.”

Chin, who noted the state has budgeted about $150,000 for an outside law firm to help with the lawsuit, said people in Hawaii find the idea of a travel ban based on nationality distasteful because they remember when Japanese Americans were sent to internment camps during World War II. Hawaii was the site of one of these camps.

People in Hawaii know that the fear of newcomers can lead to bad policy, Chin said.

The move came after a federal judge in Honolulu said earlier Wednesday that Hawaii can move forward with the lawsuit.

U.S. District Judge Derrick Watson granted the state’s request to continue with the case and set a hearing for March 15 — the day before President Trump’s order is due to go into effect.

The U.S. Department of Justice declined to comment on the pending litigation.

The state will argue at the March 15 hearing that the judge should impose a temporary restraining order preventing the ban from taking effect until the lawsuit has been resolved.

Hawaii’s complaint says it is suing to protect its residents, businesses and schools, as well as its “sovereignty against illegal actions of President Donald J. Trump and the federal government.”

The order affects people from Iran, Syria, Somalia, Sudan, Yemen and Libya. It does not apply to travelers who already have visas.

Imam Ismail Elshikh of the Muslim Association of Hawaii, a plaintiff in the state’s challenge, says the ban will keep his Syrian mother-in-law from visiting.

President Trump’s “executive order inflicts a grave injury on Muslims in Hawaii, including Dr. Elshikh, his family, and members of his mosque,” Hawaii’s complaint says.

A federal judge in Seattle issued a temporary restraining order halting the initial ban after Washington State and Minnesota sued. The 9th U.S. Circuit Court of Appeals refused to reinstate the order.

While Hawaii is the first to sue to stop the revised ban, the restraining order is still in place and could apply to the new one, too, said Peter Lavalee, a spokesman for the Washington attorney general’s office.

University of Richmond Law School professor Carl Tobias said Hawaii’s complaint seemed in many ways similar to Washington’s successful lawsuit, but whether it would prompt a similar result was tough to say.

He said he expects the judge, an appointee of President Barack Obama who was a longtime prosecutor, to be receptive to “at least some of it.”

Given that the new executive order spells out more of a national security rationale than the old one and allows for some travelers from the six nations to be admitted on a case-by-case basis, it will be harder to show that the new order is intended to discriminate against Muslims, Tobias said.

“The administration’s cleaned it up, but whether they have cleaned it up enough I don’t know,” he said. “It may be harder to convince a judge there’s religious animus here.”

Tobias also said it is good that Hawaii’s lawsuit includes an individual plaintiff, considering that some legal scholars have questioned whether the states themselves have standing to challenge the ban.