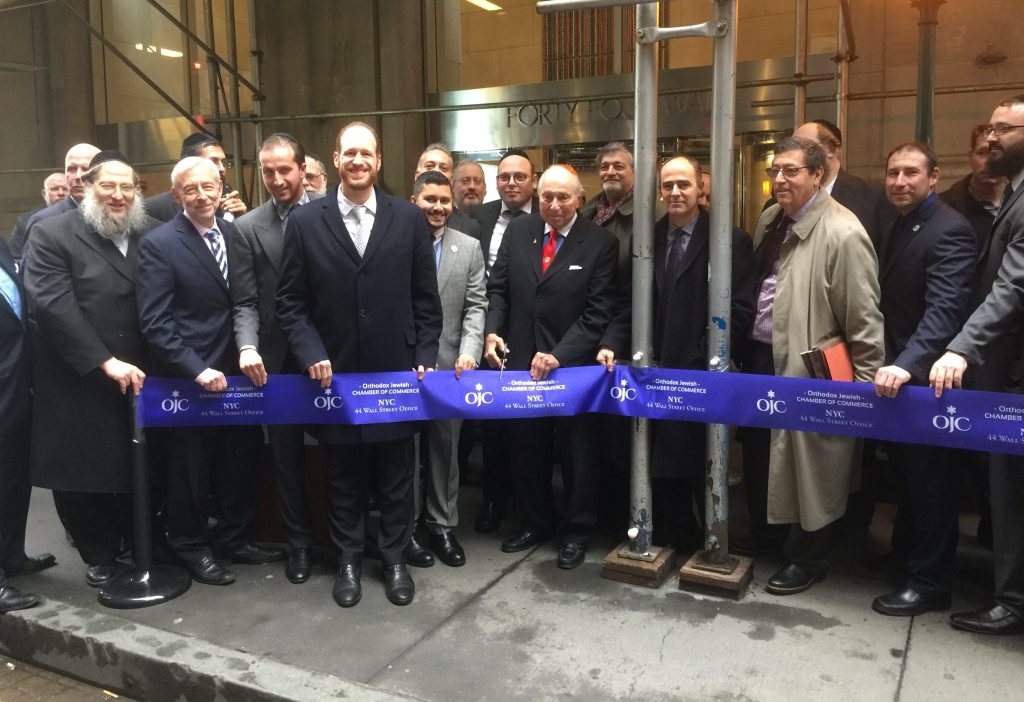 On Tuesday afternoon, amidst the hustle and bustle of Manhattan’s Financial District, a group of corporate and governmental VIPs, and Orthodox Jewish community leaders and activists, stood outside 44 Wall Street, an iconic building housing investment giants such as Charles Schwab and D.H. Blair Investment Banking Corporation, and next door to the heavily guarded “The Trump Building.”

The event was truly historic: the ribbon cutting ceremony for the new office of the Orthodox Jewish Chamber of Commerce, under the leadership of Founder and CEO Duvi Honig and Mrs. Odeleya Jacobs, VP of Economic Development and Public Policy.

It is not every day that a proudly Orthodox nonprofit opens an office in that neighborhood, but the level of influence and prestige that the Chamber has achieved is indeed unique, the result of incredible determination and siyatta dishmaya.

Standing at the podium beside the purple ribbon featuring the Orthodox Jewish Chamber of Commerce logo, Duvi Honig elaborated upon the Chamber’s mission to serve as a “group, network and union” of Jewish community businesses and related interests around the globe. Mr. Honig articulated his heartfelt gratitude towards Mr. Morton Davis, the legendary Jewish investor and Chairman of D.H. Blair, who recently assumed the position of Chairman of the Orthodox Jewish Chamber of Commerce. “Morty is a huge visionary…I’m in awe,” Mr. Honig exclaimed. “He is so young in his understanding of the needs of today…and he is looking to plant seeds for generations to come.”

Mr. Davis took to the podium amidst thunderous applause, and declared that his work with the Chamber is “part of my life.” He spoke about the important mission of the Chamber: “Instead of offering parnassah in the form of handouts, the Orthodox Jewish Chamber of Commerce helps people build successful careers.”

Indeed, the breadth of the Chamber’s reach and resources is breathtaking. Standing behind the ribbon were leaders from throughout the corporate, governmental and communal spheres in New York, New Jersey and beyond, including a significant representation from Israel. The Chamber enables Jewish community members and businesses to take advantage of this all powerful network through a variety of programs, including J-Biz Expo and Business Conference, professional seminars, Parnassah Coach, Women in the Workforce, the newly launched Small Business Alliance, and much more.

In addition, the Chamber boasts a robust public policy division with coveted relationships at all levels of American and Israeli government. The Chamber utilizes its public policy clout to lobby on behalf of Jewish community business and parnassah interests; build relationships between U.S. and Israeli businesses; and fight the BDS movement, UN anti-Semitism, and other threats.

Assemblyman Mukherji, who represents the Jersey City area, delivered a particularly impassioned address, alluding to his work as the lead sponsor of New Jersey’s anti-BDS legislation, and his three recent visits to the Jewish State. The Assemblyman articulated a fierce defense of Israel as a U.S. ally and trade partner, as well as the importance of New Jersey and other states utilizing their funds as a weapon against BDS. He concluded his address with the Hebrew words “b’yachad chazak chazak v’shalom.”

Following the ribbon cutting, the attendees gathered inside at the stately new Chamber office for a VIP networking session, and a buffet sponsored by the Reserve Cut steakhouse.

The attendees all expressed an eagerness to continue working together to make a real difference for Jewish community individuals and businesses around the world.

“The Orthodox Jewish Chamber of Commerce is the only organization of its kind, aimed squarely at strengthening Jewish community business with so many innovative programs,” says Mrs. Odeleya Jacobs. “All I can say is ‘Hodu l’Hashem ki tov.’ We can clearly see the yad Hashem guiding us and empowering us at every step.”