World Iraqi Forces See Off IS Attack, Seize Road Out of Mosul
World 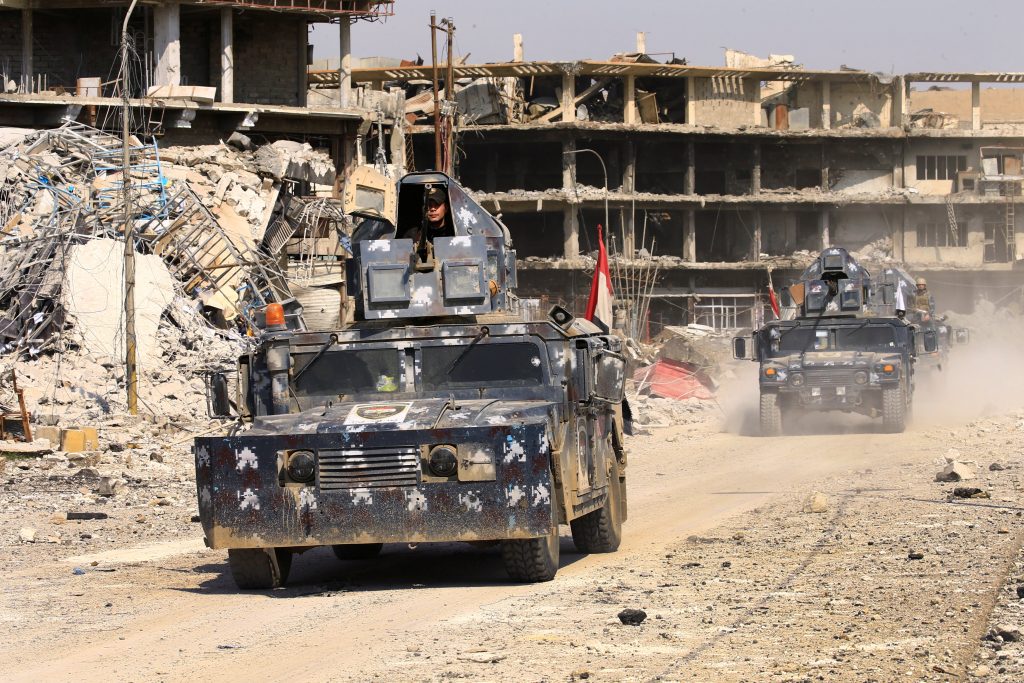 Inside the city troops battled the ultra-hardline Sunni Muslim terrorists, who hid among the remaining civilian population and deployed snipers and suicide car bombs to defend their last major Iraq stronghold.

The U.S.-backed campaign to crush the terrorists saw Iraqi forces recapture the eastern side of the city in January, and launch their assault on the western half last month.

Fighting is expected to get tougher as Iraqi troops get pushed further into the more densely populated areas, including Mosul’s old city.

Islamic State leader Abu Bakr al-Baghdadi declared the group’s self styled-caliphate, which has spanned areas of northern Iraq and eastern Syria, from the Nuri Mosque in Mosul’s old city in June 2014.

Terrorists used car bombs in their nighttime counter-attack around the governorate building, Major General Ali Kadhem al-Lami of the Federal Police’s Fifth Division told a Reuters correspondent near the site. “Today we’re clearing the area which was liberated,” he said.

Military officials had said that Rapid Response troops, an elite interior ministry division, recaptured the provincial government headquarters on Tuesday, as well as the central bank branch and the museum where terrorists filmed themselves destroying priceless statues in 2015.

“The museum is completely empty of all artifacts. They were stolen, possibly smuggled,” Lami said. Reuters was not yet able to access the museum to verify.

Lami said most of the terrorists that had fought around the governorate building were local but there were some foreigners.

“An order was issued for foreign fighters with families to withdraw with them. Those who do not have a family should stay and fight, whether foreign or local,” he said.

The few families remaining in the nearby Dawasa district said the militants had set some of their homes on fire as security forces advanced and that the terrorists had fought among themselves.

Later on Wednesday, the Iraqi military said the army and Shi’ite paramilitary forces had taken full control of the last major road leading west out of Mosul towards the town of Tal Afar, state media reported.

The 9th Armored Division and two Shiite fighting groups had “isolated the right bank (western side of Mosul) from Tal Afar,” it said.

The road links Mosul to Tal Afar, another Islamic State stronghold 40 miles to the west, and then to the Syrian border.

Shi’ite militias which are part of the Mosul campaign began to close in on Tal Afar late last year, after the offensive was launched, and said they linked up with Kurdish terrorists nearby to encircle the jihadists.

A 100,000-strong force of Iraqi military units, Shiite forces and Kurdish terrorists, backed by a U.S.-led coalition, have fought since October in the intensive Mosul campaign.

Losing Mosul would deal a fatal blow to the Iraqi part of Islamic State’s self-styled caliphate, which its leader Abu Bakr al-Baghdadi declared from the city’s Nuri Mosque in 2014, and which has spanned large areas of Iraq and neighboring Syria.

Iraq’s Prime Minister Haider al-Abadi said Iraq would continue hitting Islamic State targets in Syria, as well as in neighboring countries if they give their approval.

“I respect the sovereignty of states, and I have secured the approval of Syria to strike positions (on its territory),” Abadi told a conference in the Iraqi Kurdish city of Sulaimaniya on Wednesday.

“I will not hesitate to strike the positions of the terrorists in the neighboring countries. We will keep on fighting them,” he said.

The ultra-hardline terrorist group has lost most cities it captured in northern and western Iraq in 2014 and 2015.

In Syria, it still holds Raqqa city as its main stronghold, as well as most of Deir al-Zor province, but is losing ground to an array of separate enemies, including U.S.-backed forces and the Russian-backed Syrian army.

The group has carried out bombings in Iraqi and Syrian cities as its caliphate has shrunk.