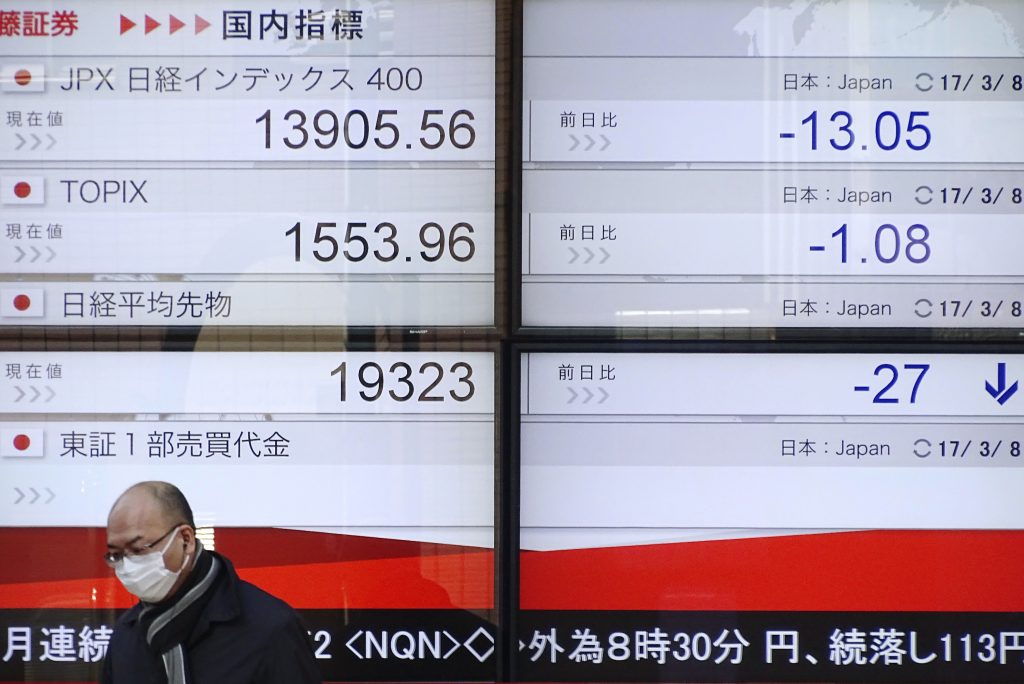 Asian stocks erased early losses and edged higher on Wednesday as strong China trade data bolstered bets of a recovering global economy, though gains were capped by caution ahead of a widely expected U.S. interest rate hike next week.

China’s imports in February grew 44.7 percent from a year earlier on a yuan-denominated basis, accelerating from the previous month and leading to a rare trade deficit for the country. Exports rose 4.2 percent.

That pushed the MSCI’s broadest index of Asia-Pacific shares outside Japan up by a quarter of a percent, putting it on track for a third consecutive day of gains. Mainland and Hong Kong stocks led gainers.

European stock futures are pointing to a cautious start.

“We suspect that this largely reflects the boost to import values from the recent jump in commodity price inflation, but it also suggests that domestic demand remains resilient,” Julian Evans-Pritchard at Capital Economics said.

The strong trade data reinforced a growing view that economic activity in China globally picked up in the first two months of the year. U.S. dollar-denominated trade figures from China were expected later in the day.

On Tuesday, key exporter Taiwan reported solid shipments for the first two months of 2017 while Japan GDP data for the December quarter was revised higher thanks to increased capex spending.

The Federal Reserve has a policy meeting on March 14-15 and markets have quickly ratcheted up bets of a rate hike at the meeting after recent hawkish comments by U.S. policymakers.

Investors have rushed to buy stocks and emerging market debt this year as they had previously expected the Fed to raise rates only gradually and as recent data from Asia such as trade have surprised on the upside, cementing the view of recovering global momentum.

But with valuations nearing the top of their historical trading ranges, some analysts are predicting investors will turn increasingly cautious.

Asian stocks remain cheaper versus their U.S. counterparts but they are approaching the upper end of a historical trading band on a price-to-earnings basis, according to Thomson Reuters data.

Hong Kong stocks rose 0.5 percent, propped up by the services sector and extended inflows from the Chinese mainland. Inflows into Hong Kong stocks from China via two stock-connect schemes have crossed the $7 billion mark so far this year, outpacing ETF and active flows, Goldman Sachs said.

Bond markets are also scenting a rate hike around the corner, with 10-year U.S. Treasury yields poised to break out of a three-month trading range. On Wednesday, it was at 2.54 percent, compared with 2.49 percent on Friday.

That hasn’t stop investors from piling into Asian debt. An index measuring the yield of a basket of dollar-denominated bonds from Asian high grade companies held firm at 4.6 percent.

U.S. stocks ended lower on Tuesday, putting the S&P 500 and the Dow Jones Industrial Average in their first consecutive sessions of decline in more than a month. E-mini futures were trading lower in Asia.

“Unless the [U.S.] February payrolls report due on March 10 is an unmitigated disaster, an outcome we do not expect, a March 15 hike is on the way,” Societe Generale strategists said.

Higher yields have brightened the dollar’s outlook in recent days with the greenback changing hands at 113.61 Japanese yen, compared with 111.75 at end-February, though the U.S. outlook on rates will be a key driver in the coming days.