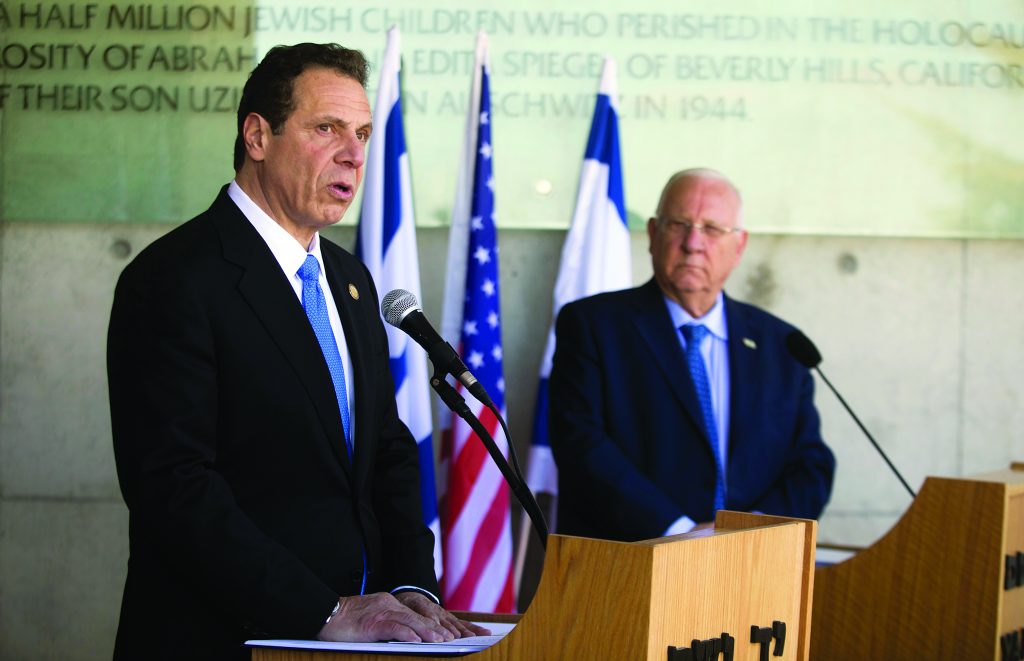 Lots of politicians say they care about the Jewish community; they even say that they support Israel — but only when the chips are down do we know who our friends are. This week, in the wake of a 97 percent increase in anti-Semitic hate crimes in New York, Governor Andrew Cuomo made an impromptu trip to Israel to express solidarity with the Jewish people and the Jewish state. This trip sends a powerful message that New York and the United States will always stand strong against anti-Semitism and with Israel, and it could not have come at a more important moment. That’s why I am writing to publicly thank Governor Cuomo.

In a whirlwind 24-hour trip to the Jewish homeland, Governor Cuomo visited Holocaust Museum Yad Vashem, uttering the word “Hineini” — meaning “Here I am” — to express his solidarity with Israel. He visited the Kotel, leaving a prayer note between the stones, and in so doing followed in the footsteps of the proud people who have for millennia called the land their home. He met with Prime Minister Bibi Netanyahu and President Rubi Rivlin, and spoke vociferously against hatred in all its forms. Israelis appreciate this. That’s why the President of Israel said, “It is an extremely important signal that the U.S. people and government will not let anti-Semitism win.”

And the Israeli president is right. It is an important signal. Just hours before Cuomo’s visit, over 40 toppled tombstones were discovered at Washington Cemetery in Borough Park, Brooklyn — the heart of New York City’s orthodox Jewish community. While it’s not clear when this happened, this was just the latest in a rash of attacks on cemeteries, synagogues and community centers throughout the United States.

While the governor was in Israel, one of our most prominent Jewish New York State Supreme Court justices, Noah Dear, was subjected to anti-Semitic attacks in the heart of our community. Sadly, the political community has been far too quiet in the face of these horrible attacks. In making his visit to Israel, Governor Cuomo signaled that he is unwilling to remain silent in the face of hatred. For that, he deserves our commendation, respect and gratitude.

This is not the first time the governor has been to Israel. I was honored to join him in the summer of 2014 when he made another quick trip — this time to stand in solidarity with Israelis against the ongoing onslaught of Palestinian terror attacks. The governor followed up on that trip by announcing last year that New York would no longer do business with companies that support BDS, a pernicious and dangerous effort to legitimize the State of Israel.

Most importantly, Governor Cuomo has put his money where his mouth is. Just this past week he announced a $25 million initiative to protect Jewish schools throughout New York State. I am especially pleased with this because it matches the $20 million legislation that I passed last year providing yeshivos with free security guards across New York City.

Though there are those who insist on seeing the governor’s trip through a political lens, speculating on what it might say about his presidential ambitions, I believe such discussions are actually welcome. There needs to be a strong message, now more than ever before, that whatever office you seek, it’s in your interest and in America’s interest to protect the Jewish people and the State of Israel. We should be encouraging our leaders, of all positions and political stripes, to express solidarity with Israel and stand against anti-Semitism at this critical time.

Speaking in Israel, the governor rightly said, “If you really care, you show up. And I really care.” Governor Cuomo has proven that when it comes to the Jewish community, he really cares. It is time for the rest of our political leaders to do the same.