Israel Liberman: Despite Similarities, My Speech Was Different From Yaalon’s
Israel 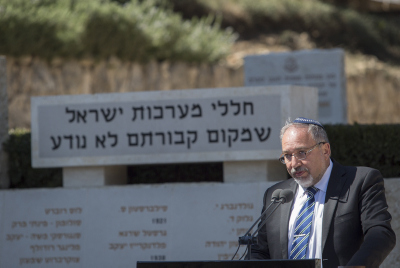 Attendees of a memorial event at Mount Herzl Cemetery Sunday had a sense of “deja vu” when they heard Defense Minister Avigdor Liberman speak – but it turned out that they had indeed heard a very similar version of the speech Liberman gave at the annual ceremony for soldiers whose place of rest is not known. According to an analysis by Channel Ten, large parts of the speech were lifted directly from one given just two years ago by former Defense Minister Moshe Yaalon.

Commenting on the mini-scandal, Liberman’s office said that listeners, and Channel Ten, were mistaken. “Anyone who hears both speeches immediately realizes that they were two different speeches.” In addition, the office said, “the nature of these events is such that the anecdotes and comments used often express similar sentiments.”

With that, Channel Ten said, there was a clear connection – almost an exact one – between the speeches. Like Yaalon, Liberman started out talking about Zorik Lev, and IDF fighter pilot who was lost when his Skyhawk plane fell into the sea off the coast of Egypt during the Yom Kippur War, and mentioning the son who, just an infant when his father disappeared, never knew him. Liberman even read a letter written by the son to his father in 2003, as Ya’alon did, choosing to read the same excerpt that the former Defense Minister did.

Other parts of the speech – such as Liberman’s warnings to Israel’s enemies that “I would not recommend that anyone try our determination to defend ourselves,” and “those who seek to attack us will find an army that is prepared to respond to any threats,” as well as his closing remarks that “your sacrifices are an inspiration to all of us” – all borrowed very liberally from Yaalon’s speech.

The seventh of Adar is the day set aside by the IDF to honor soldiers lost in battle, whose remains were never recovered. The date was chosen because it is the yahrzeit of Moshe Rabbeinu, a”h, whose kever is unknown.