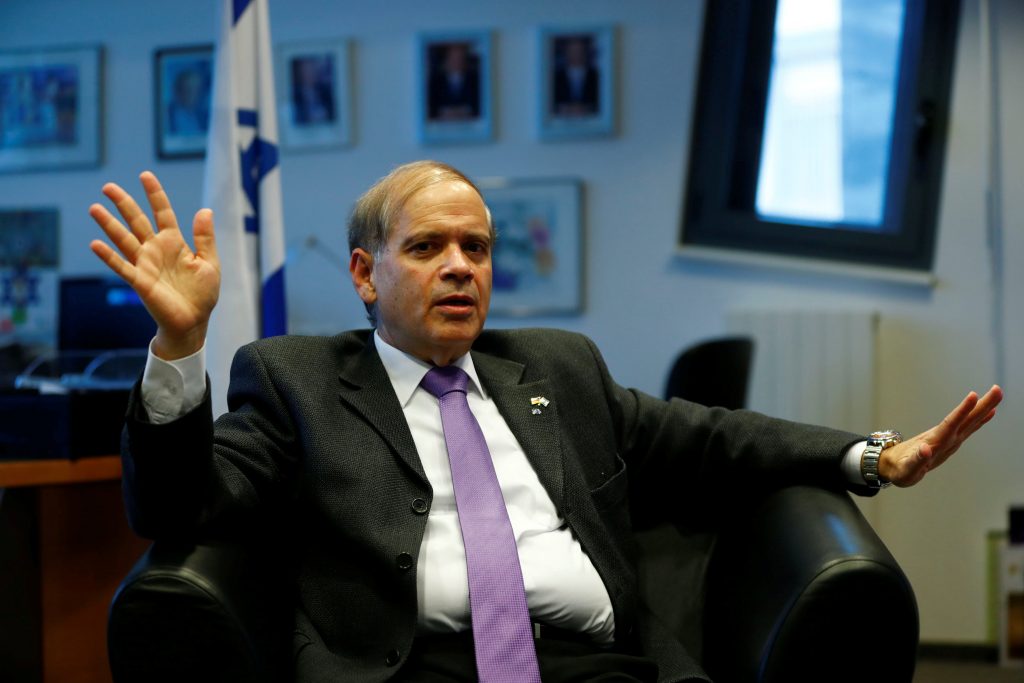 In 2008, the 60th anniversary of the state of Israel, Angela Merkel delivered a speech in the Knesset in which she described relations between Germany and Israel as “excellent.”

“Yes, our relations are special, indeed unique, marked by enduring responsibility for the past, shared values, mutual trust, abiding solidarity for one another and shared confidence,” the German chancellor told members of the Knesset, many of whom rose to their feet to applaud.

Nine years on, it seems unlikely that Angela Merkel would depict ties in the same glowing light. Political relations between Germany and Israel have sunk to their lowest point in several years, German officials say.

And there is concern in Berlin that ties could become even more strained with Donald Trump in the White House. He has expressed ambivalence about the creation of a Palestinian state – a central aim of German policy in the Middle East – and offered only the mildest of criticism of Israeli building in Yehudah and Shomron.

Israeli officials also quietly acknowledge that relations are at a low point, although they say the links between the two countries are still strong.

The extent of the strains between Germany and Israel was underscored last month when Angela Merkel canceled a summit with Prime Minister Binyamin Netanyahu that was due to take place in Yerushalayim in May.

The official explanation was that Berlin was too busy with its G20 presidency. But German officials said privately that the main reason was anger over Netanyahu’s plans, unveiled in the weeks after Pres. Trump took office, to accelerate building in Yehudah and Shomron and east Yerushalayim, and passage of a law to legalize thousands of homes built on land claimed by Palestinians.

“Netanyahu does not listen to us and the situation may only get worse with Trump,” said one senior German official, who acknowledged that relations with Israel’s right-wing government had been “completely pared back.”

In Israel, an official described the cancellation of the summit as a sign of “deep, deep displeasure” with Mr. Netanyahu, but argued that Berlin’s main gripe was with Mr. Trump.

“Germany is really angry with Trump, but they can’t afford to express it or take him on directly because he’s too strong,” the official said.

Kerstin Mueller, who runs the Tel Aviv office of the Heinrich Boell Foundation, a left-leaning German think tank, said recent developments may force Berlin to reexamine its relationship with Israel – a country towards which it feels a deep attachment and obligation because of the Holocaust.

“The sense of responsibility is still there but I don’t know how long it will hold,” Kerstin Mueller said. “The special relationship between Germany and Israel is not set in stone. In fact, it looks right now like it may be in danger.”

In an interview, Yaakov Hadas-Handelsman, Israel’s ambassador to Germany, pointed to the strong ties between civil society in Germany and Israel, a surge in the number of young Israelis who visit the German capital, and a steady back-and-forth of lawmakers and ministers between Berlin and Yerushalayim.

But Mr. Hadas-Handelsman acknowledged a growing gap between the Israel-friendly stance that has guided German governments for decades and an increasingly skeptical population, particularly among younger Germans who do not feel a sense of responsibility for the Holocaust.

A 2015 Bertelsmann Foundation study on the relationship showed that 77 percent of Germans believed it was time to “leave the past behind.” Some 66 percent expressed anger that Germans were still blamed for crimes against Jews. Among respondents between the ages 18 and 29, 79 percent felt this way.

“The more time that passes, the more difficult it will be to maintain the unique relationship, even if there are no political disagreements,” Mr. Hadas-Handelsman told Reuters.

Ties between the countries run deep.

Germany is a major sponsor of scientific research in Israel. It supplies the Israeli navy with submarines, financing a substantial portion of the costs itself.

And economic relations are strong. Bilateral trade in goods and services totaled $5.5 billion last year, small compared to the $25.6 billion between Israel and the United States, but second only to Britain among European Union countries.

There are no signs that the German government is considering ratcheting back these areas of cooperation.

But a German diplomat said it was becoming ever more difficult to sell the close relationship with Israel to the German public.

“Getting the balance right with Israel is increasingly difficult. If you don’t criticize you get lambasted in the media. If you do criticize you are alienating a core partner,” the diplomat said.

In a German election year, he said, Angela Merkel had nothing to gain from an awkward meeting with Mr. Netanyahu.

Political tensions are not a new phenomenon. Back in 2011, Germany reportedly threatened to stop delivery of Dolphin submarines in response to Israeli building plans. A year later, Mr. Gabriel, then head of the opposition Social Democrats, caused a storm by likening Israel’s treatment of Palestinians to “apartheid.”

The most senior members of the German government began paring back their visits to Israel some years ago. Angela Merkel has visited only twice since her 2008 speech to the Knesset. Her last trip to Israel was in early 2014.

But German officials and analysts say the current political divide appears to be deeper than it has been at any time in recent memory.

“Israel knew with previous U.S. governments that it could only go so far. Now with Trump, the more radical elements in Israel feel emboldened,” said Kerstin Mueller of the Heinrich Boell Foundation. “We are at a very delicate moment. It is important how Germany reacts to this new reality. The relationship could change very quickly.”