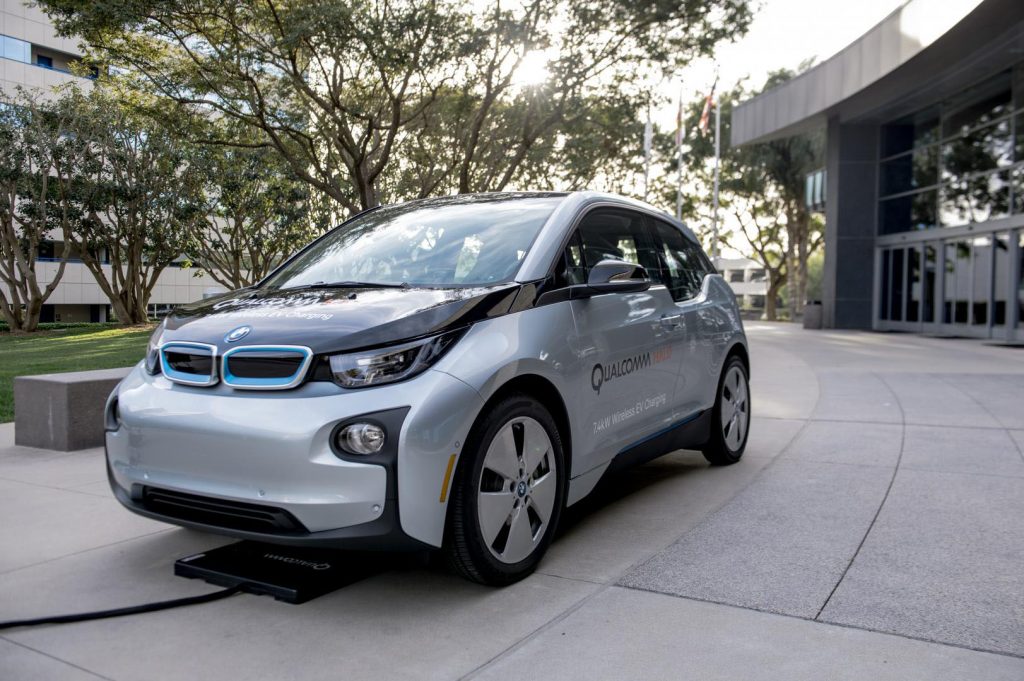 Or, your car charging itself as it drives down the road.

Those scenarios are not as far-fetched as you may think. Indeed, a group of tech gurus who gathered last month in San Diego, discussed how a wireless electric vehicle is about to become a reality.

“This is definitely coming,” said Jesse Schneider, chairman of the wireless task force for the Society of Automotive Engineers, or SAE, an international group working to develop common standards to make sure the sector’s competing technologies work together.

Car buyers are familiar with plug-in hybrids and all-electric vehicles, but companies such as Qualcomm seek to jump-start the transition from internal combustion to zero-emission cars with “inductive” charging.

Instead of charging a vehicle with a plug or cable, the driver using a wireless system aligns the car over a charging pad and an electromagnetic field does the rest.

“Customers wait for the green light and then walk away, knowing when they come back they will be more fully charged or fully charged, depending on how long they were away,” said Schneider. “You can actually just park over the wireless charging system and everything is done automatically after that.”

The technology has been talked about for years but starting with the hybrid version of the 2018 Mercedes-Benz S550e, wireless vehicle charging technology will make its debut. The German automaker reached an agreement with Qualcomm to use the San Diego-based company’s Halo technology as a feature on the luxury car, which has a base price of $96,600.

A slew of other car makers are about to enter the wireless-charging market as well.

In addition to his work for SAE, Schneider works for BMW, which has its own plans for wireless charging in some of its models.

“Every global car marker has an active program for wireless charging,” said Grant Reig, senior product manager at Massachusetts-based Witricity, who delivered a presentation at the SAE conference. “Look for this to be quite mainstream by 2020.”

Expect charging pads to be seen first in the garages of electric vehicle, or EV, owners. Schneider said the systems will cost “a few thousand dollars.”

Earlier versions of the systems were hampered by complaints that the EVs had to be precisely parked in order to get a good charge, but test results from SAE show the technology has improved to the point that wireless systems can charge an EV at essentially the same efficiency and speed as plug-ins.

The chief executive of Momentum Dynamics said an 11-kilowatt wireless charger is capable of charging a Nissan Leaf to 80 percent in the space of a half-hour and getting a full charge in two hours.

But the ultimate goal is to take vehicle charging beyond the parking space — and put it on the road, literally.

What’s called dynamic charging foresees a future where vehicles charge themselves as they drive. Using coils embedded in roads, EVs would refuel as they stay in transit, creating their own self-perpetuating electrical loop. It’s similar to the way some mobile devices get charged.

“What we could potentially see with the wireless power transfer is incredibly exciting,” said Andrew Hoskinson, the EV Infrastructure Planning and Development Strategist at San Diego’s Center for Sustainable Energy, which hosted the SAE forum.

The most likely introduction of dynamic charging figures to come from buses traveling on public transportation routes equipped with charging coils. Delivery trucking firms also figure to have an incentive to exploit the technology.

And that could accelerate the use of autonomous vehicles.

“You’re going to have a vehicle that is self-parking, and after taking occupants wherever they needed to be dropped off, the vehicle immediately parks and beings to charge automatically,” said Hoskinson. “You end up with something that can be a real game-changer.”