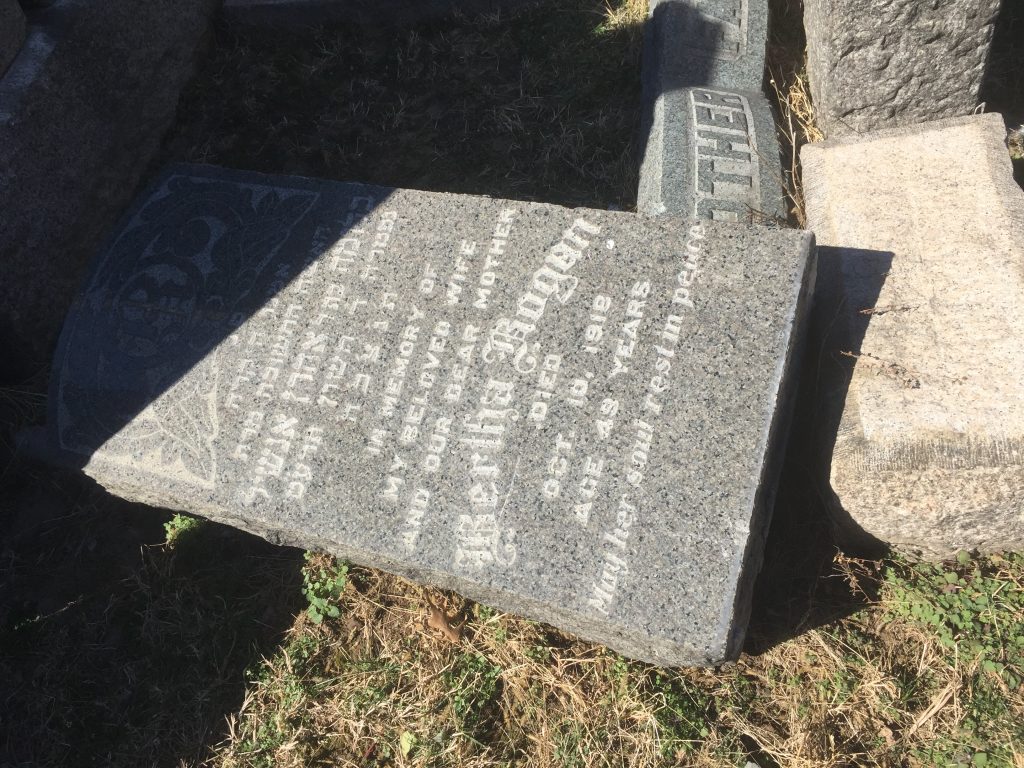 The discovery of toppled tombstones at Brooklyn’s Washington Cemetery is raising concern among some community officials of a connection to a nationwide increase in anti-Semitic acts, including desecration of cemeteries in other cities, despite cemetery officials and others insisting that the tombstones had fallen naturally over the course of time.

A Jewish man who walks through an alley near the cemetery on his way to shul every Shabbos, noticed this Shabbos that a portion of the barbed wire fence was cut and that a number of tombstones were on the ground. The alley is behind Franklin Delano Roosevelt High School, at 57th Street between 19th and 20th Avenues.

The man notified Shomrim, and Shomrim, the NYPD and a number of elected and communal officials visited the cemetery to investigate on Motzoei Shabbos and Sunday.

Among those visiting the cemetery were Police Commissioner James O’Neill, along with two chiefs and representatives from the NYPD’s hate-crimes unit; Assemblyman Dov Hikind; City Councilman David Greenfield; Assemblywoman Helene Weinstein; New York City Comptroller Scott Stringer; and a number of officials and activists from the Brooklyn Jewish community.

A total of 42 headstones were found toppled in the portion of the cemetery near the cut fence.

The cemetery’s general manager said that the stones were not toppled intentionally, but that over time, stones occasionally can come down. “There was no act of vandalism,” she said.

After conferring with cemetery management, the NYPD said that the stones came down due to “long-term neglect, lack of maintenance and environmental factors.”

But at a press conference Sunday morning, a number of elected and communal officials said that while they cannot pinpoint when or why the stones were toppled, they believe it was an intentional act.

Greenfield and Hikind noted that among the 42 stones on the ground in that one section near the cut barbed wire, a few looked like they had been down for a while — for example, they had weeds growing around the stone on the ground — but the “overwhelming majority,” according to Greenfield, appeared to have been knocked over recently. Moreover, Greenfield and Hikind had walked through the large cemetery on Sunday morning, and noted that while there were a few stones on the ground in other sections of the cemetery, there were not nearly as many as in the section in question, and none appeared to have been knocked down recently.

“We don’t want to jump to conclusions” regarding when the tombstones were toppled in the section in question, why or by whom, and whether this is related to recent vandalization of other Jewish cemeteries, said Hikind. “But somebody vandalized this cemetery.”

“We don’t know who did this or why,” said Greenfield. “But some headstones were very clearly knocked down.”

In an interview with Hamodia, Chaim Reichberg, an askan who manages many of the kevarim of talmidei chachamim in Washington Cemetery, said that the cemetery has had toppled tombstones for years, but people are only noticing it now because of the recent instances of vandalization of Jewish cemeteries.

“There are hundreds of matzeivos that have been on the ground for years,” said Reichberg, who has been heavily involved in the cemetery’s upkeep and in drawing attention to the many great but often-forgotten people who have been buried there.

Over time, the ground gives way and old stones begin to sink and topple, said Reichberg.

“I know every stone in the cemetery,” he said. “This was not a case of vandalism. The only thing that happened now is that people are noticing it.

“No vandalism occurred here, but I am very happy that this is bringing people to an awareness of the issue of neglect for batei chaim.”

Reichberg noted that Sunday is 7 Adar, Moshe Rabbeinu’s yahrtzeit, a day on which chevrah kaddisha members traditionally fast and ask mechilah for not giving proper kavod to meisim.

“People have to open their pockets and work to fix the matzeivos.”