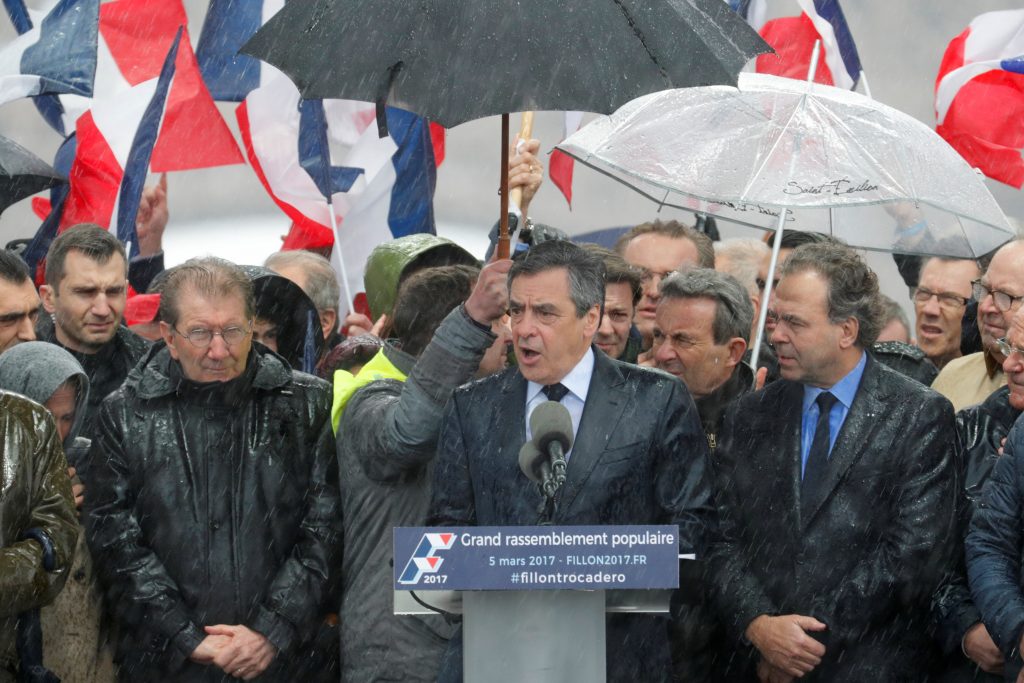 With the Eiffel Tower as a backdrop, French conservative Francois Fillon clung tenaciously to his presidential candidacy Sunday, emboldened by thousands of supporters at a high-stakes rally aimed at quashing pressure on him to step aside because of impending corruption charges.

Crowds of flag-waving voters chanting “Fillon, President!” appeared to give him the confidence he needs to keep up the fight. That support came despite a raft of defections by conservative allies in recent days that threatened to plunge France’s unpredictable presidential campaign into unprecedented disarray just seven weeks before its first-round election.

“No one can stop me from being a candidate,” he said on France-2 tv Sunday night. The rally, he said was “a demonstration that my legitimacy remains very strong.”

Fillon, a former prime minister, apologized to voters for errors in judgment but insisted he was being unfairly targeted in an election season. Once the front-runner in France’s presidential race, he is now being eclipsed by two other candidates.

His low-profile Welsh wife Penelope — accused of earning a generous taxpayer-funded salary for years for jobs she never performed — took an unusually public place at his side at Sunday’s rally, waving a tricolor flag before adoring crowds.

Despite the rally, Fillon’s Republicans party remains dangerously divided over his candidacy. Its political committee is holding an urgent meeting Monday to evaluate the situation after Sunday’s rally and the recent defections, including by Fillon’s campaign manager and his campaign spokesman.

Many conservatives want Alain Juppe, another former prime minister who was the runner-up in the party’s primary, to run in Fillon’s place.

Fillon warned that this close to election day, any “improvised candidacy … would lead to failure.”

Juppe, who has shown little inclination to run as a replacement candidate, planned to make a statement Monday in Bordeaux, where he is mayor. He campaigned on a more moderate platform than the tough-on-security, pro-free market Fillon.

Polls now suggest that far-right leader Marine Le Pen and centrist independent candidate Emmanuel Macron will come out on top in the first-round vote on April 23. The top two vote-getters go on to compete in the May 7 presidential runoff. A poll released Sunday suggested Juppe would have a better chance at reaching the runoff than Fillon.

Fillon showed no sign of backing down Sunday, however.

“You should not surrender to worry or anger,” he told the rally on Place de Trocadero, buffeted by rain and wind. He thanked “those of you who will never give up the fight, you who always refuse to listen to the siren calls of discouragement.”

Fillon apologized to his supporters for having to concentrate on defending his family’s honor “while the most essential thing for you, as for me, is to defend our country.”

“I committed the first error in the past, in asking my wife to work for me. … I shouldn’t have done that,” he said. “And I committed the second in hesitating about the way to talk about it.”

Dozens of buses brought supporters in from around France, while riot police stood guard. Fillon claimed that 200,000 people showed up at Sunday’s rally, though police estimates were much lower. Puzzled tourists took selfies of the crowd.

Retirees Luc and Marie Houllier braved the blustery weather to denounce what they see as a politically-driven investigation.

“He is the only one who can raise France up again,” Luc said.

Older people constituted a large part of the rally, along with parents of young children attracted by Fillon’s support for traditional Catholic family values.

Le Pen is riding high even though she is at the center of several investigations along with her anti-immigration National Front party.

Even Juppe, the potential savior of conservative chances, was convicted in 2004 for an illegal party funding scheme and barred from elected office for a year.

In the Fillon case, financial prosecutors are investigating reports that she and two of their five children earned a total of more than 1 million euros in taxpayer-funded jobs as parliamentary aides that they never carried out. It’s legal in France to hire relatives for public jobs, but they must actually do the work.

The Fillons insist they did.

Fillon initially said he would step down if charged, but decided Wednesday to maintain his candidacy even though he’s been summoned to face charges on March 15.

In her first interview since the scandal broke, Penelope Fillon urged her husband to stay in the race.

“Unlike the others, I will not abandon him,” Penelope Fillon was quoted as saying in the Journal du Dimanche newspaper. “I told him to continue to the end.”