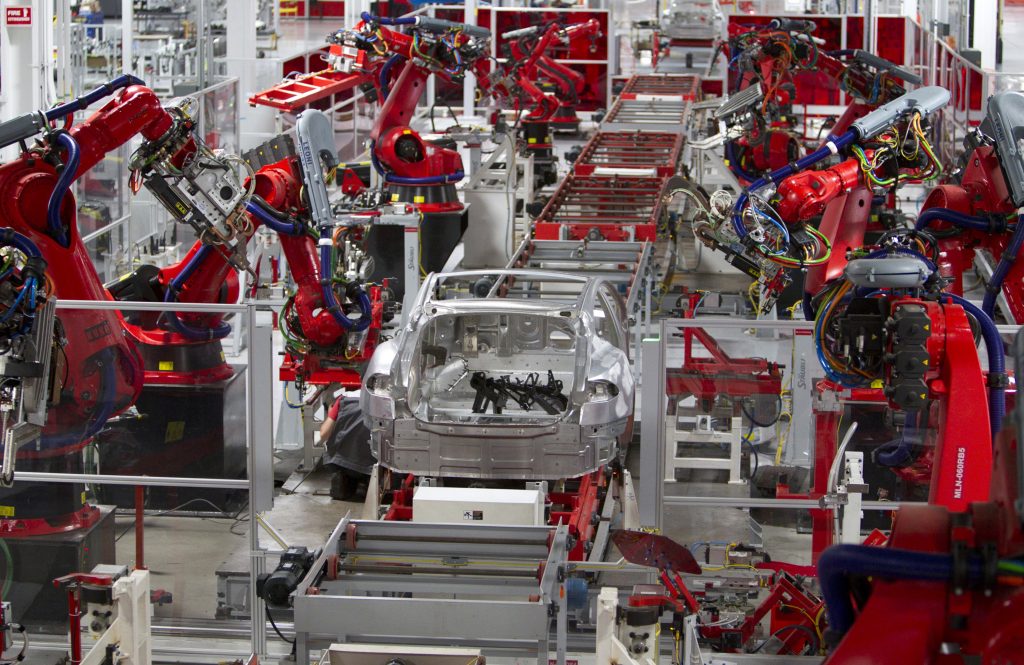 Tesla CEO Elon Musk has a vision for his factory: A Fremont auto plant buzzing with a high-speed choreography between parts and robots churning out 500,000 cars next year.

That’s nearly six times the current rate of production — the factory produced about 84,000 vehicles last year — but Musk says the company can meet its aggressive goals.

“Probably not a lot of people will believe us about this, but I’m absolutely confident that this can be accomplished,” Musk told shareholders last year, saying the modern automobile factory could be redesigned and become 10 times more efficient. “We’re basically going to design a factory like you’d design an advanced computer.”

Skeptics question whether Tesla can meet its goals, but the company’s growth may hinge on the quick, mass production of its new, lower-cost sedan, the Model 3. Tesla received nearly 400,000 reservations in the weeks following the Model 3’s unveiling last year.

Musk said last month during the company’s earnings call, that the Model 3 would begin production in July, ramping up to 5,000 per week by the end of the year. The company declined to say how many Model 3s in total would roll off the line this year.

Barclays analysts are predicting Tesla will not ship a Model 3 this year.

“Tesla is highly unlikely to announce a delay until it absolutely must,” analyst Brian Johnson wrote. “Thus we may need to wait until the summer to learn about a delay.”

Tesla says Model 3 is on track for volume production by September.

Producing a half-million vehicles at the Fremont factory next year would make the plant among the most productive in the world. That’s more cars than Tesla has ever built.

The company has an ambitious plan to build 4.6 million square feet of manufacturing and office space, essentially doubling the factory size.

Work aimed toward reaching that goal is underway at the sprawling factory in Fremont, which for decades was operated by NUMMI, a defunct auto manufacturing company, that was jointly owned by General Motors and Toyota. A series of small projects worth about $5 million has begun, according to building permits filed with the city of Fremont.

Tesla submitted plans in January for a $2.8 million expansion of its north paint shop, according to public records posted on BuildZoom, a website tracking construction permits. In recent months, Tesla also has filed another 30 permits for $2 million more in improvements — including a range of repairs to heating and air conditioning units, water lines and stamping buildings. Tesla shut down production for a week last month to reconfigure the plant for the Model 3.

“It’s been a constant and fluid process,” he said, adding that he expects the next six months to be busy.

The company’s master strategy “could be anywhere from a five to 20-year plan, depending on how things go,” he said.

The company’s production goals would top peak output at the former NUMMI plant, which set a record with 428,632 vehicles produced in 2006, according to a history of the plant filed with permitting documents. Tesla took over the plant in 2010.

In Musk’s vision, Tesla will reinvent the way it makes cars and eventually become the world’s leading manufacturer. A Tesla spokesman declined to comment on specifics about the factory, but referred to previous public statements from company executives.

The company has reassigned engineers to redesign the plant layout and the manufacturing process, Musk said in last month’s earnings call. More robots are on the way.