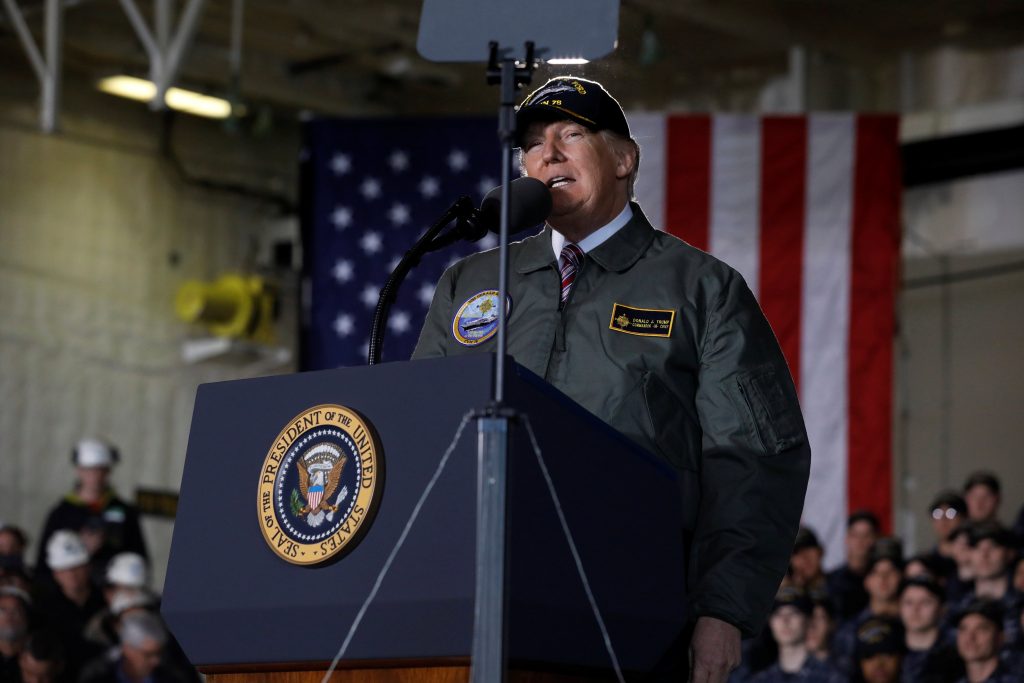 President Donald Trump expressed support for Attorney General Jeff Sessions, and the White House dismissed — as a partisan attack — Democratic calls for Sessions to resign over allegations that he lied during his confirmation hearing about conversations he had with Russia’s ambassador to the U.S. while serving as a prominent surrogate for President Donald Trump’s campaign.

“Jeff Sessions is a former colleague and a friend, but I think it would be best for him and for the country to recuse himself from the DOJ Russia probe,” Rob Portman of Ohio said Thursday in a statement. Republican Sen. Lindsey Graham of South Carolina and House Oversight Chairman Jason Chaffetz of Utah made similar calls.

The chorus punctured the afterglow from Trump’s address to Congress earlier this week and puts added pressure on a White House still reeling from the ouster of Trump’s national security adviser last month. Multiple investigations have been launched by the FBI, other agencies and congressional committees into a range of allegations related to Russia’s interference with the election and possible contacts with the Trump campaign.

The Justice Department confirmed Wednesday that Sessions twice had contact last year with Ambassador Sergey Kislyak. Sessions testified during his Senate confirmation hearing on Jan. 10 that he had no contacts with Russian officials.

“Because the Department of Justice should be above reproach, for the good of the country, Attorney General Sessions should resign,” Schumer of New York said at a news conference in Washington. He also said Sessions may well become a subject of an investigation. “The information reported last night shows beyond a shadow of a doubt he cannot possibly lead an investigation into Russian interference in our elections, let alone come close to it.”

California Sen. Dianne Feinstein, the top Democrat on the Judiciary Committee, said that Sessions must either recuse himself from any probes into Russian interference in the U.S. election or resign. Democratic National Committee Chairman Tom Perez said Sessions must resign.

House Speaker Paul Ryan, however, said that he saw no reason for Sessions to recuse himself at this point.

“If he himself is the subject of an investigation, of course he would” recuse himself, Ryan told reporters on Thursday. “If not, I don’t see any purpose or reason for doing that.”

Several Senate Republicans also brushed aside calls for Sessions to step down or for President Trump to appoint a special prosecutor.

“We’re not in the business of investigating individuals, senators, that say they were doing Senate business,” Senate Intelligence Chairman Richard Burr of North Carolina told reporters on Thursday. “Jeff Sessions has to decide whether his role as attorney general, whether he can participate in anything to deal with Russian involvement, potential involvement in our elections, and I trust Jeff Sessions to make that decision.”

President Trump, visiting a Navy aircraft carrier in Newport News, Virginia, on Thursday, said he has “total” confidence in Sessions. Asked if Sessions should recuse himself, Trump said, “I don’t think so.”

A White House official who asked not to be identified on Thursday said that Sessions met with the ambassador in his official capacity as a member of the Senate Armed Services Committee. The official said that is consistent with Sessions’ testimony.

Democrats say that Sessions wasn’t truthful when he was asked by Senator Al Franken during a Jan. 10 confirmation hearing before the Senate Judiciary Committee what he would do if he learned that anyone tied to the Trump campaign had communicated with the Russian government during the course of the campaign.

“I’m not aware of any of those activities,” Sessions said, adding that he had “been called a surrogate at a time or two in that campaign, and I did not have communications with the Russians.”

As an Alabama Republican senator, Sessions was visited by Kislyak in his Capitol Hill office on Sept. 8, the Justice Department said in its statement. He also met with the envoy as part of a small group of ambassadors after an event hosted by the Heritage Foundation in July at the Republican National Convention in Cleveland.

A Sessions spokeswoman, Sarah Isgur Flores, rejected accusations that he had misled lawmakers. “Last year, the senator had over 25 conversations with foreign ambassadors as a senior member of the Armed Services Committee, including the British, Korean, Japanese, Polish, Indian, Chinese, Canadian, Australian, German and Russian ambassadors,” she said. “He was asked during the hearing about communications between Russia and the Trump campaign — not about meetings he took as a senator and a member of the Armed Services Committee.”

On Thursday, Sessions was asked about the allegations by an NBC News crew. “I have not met with any Russians at any time to discuss any political campaign,” Sessions said.

The Justice Department rejected suggestions that Sessions was misleading in his testimony, saying that as a senator he discussed relations between the U.S. and Russia during the September meeting with Kislyak. Ambassadors would often make superficial comments about election-related news, but those were not the substance of discussions, the department said.

The revelation, reported earlier by The Washington Post, has raised fresh questions about which Trump associates had contacts with Russian government officials during the presidential campaign and what was discussed. It also intensified calls for Sessions to recuse himself from probes into Russian hacking in last year’s campaign.

Graham, a Republican from South Carolina, weighed in with a call for Sessions to recuse himself from any investigation of Trump campaign ties to Russia during a CNN town hall on Wednesday night.

“I don’t know that there’s anything between the Trump campaign and the Russians. I’m not going to base my decision based on newspaper articles,” Graham said. “If there is something there, and it goes up the chain of investigation, it is clear to me that Jeff Sessions, who is my dear friend, cannot make this decision about Trump.”

Graham also said that if the Federal Bureau of Investigation discovered any sign of potential criminal activities, a special prosecutor should be appointed to handle the matter.

Chaffetz, a Utah Republican, said on Twitter Thursday, “AG Sessions should clarify his testimony and recuse himself.”

No. 2 House Republican Kevin McCarthy said on MSNBC Thursday that “it would be easier” if Sessions recuses himself from any investigation into Russia and the Trump administration and campaign. “I just think he needs to clarify what these meetings were and when did he have them,” he said, adding that lawmakers meet with ambassadors “all the time.”

Later on Fox News, McCarthy, one of President Trump’s top House allies, said his comments didn’t constitute a call for Sessions to recuse himself, noting that Sessions himself has previously said he’ll do so if needed.

Republican Sen. Marco Rubio told NPR that Sessions should answer questions about why he didn’t mention the meetings during his confirmation hearing. Senator Ted Cruz labeled the controversy “political theater” on MSNBC.

The White House official on Thursday accused Franken of pushing the story to distract from Trump’s well-received address to a joint session of Congress earlier this week.

“His responses to me weren’t accurate,” Franken said on MSNBC Thursday. He called on Sessions to “immediately recuse” himself from any Russia investigations and said that an independent special prosecutor should be appointed.

Sessions is the second Trump administration official to face tough questions about his contact with Kislyak. Former national security adviser Michael Flynn was fired by President Trump after it was revealed he had not accurately portrayed the content of his conversations with the Russian envoy to other administration officials, including Vice President Mike Pence.

The revelation that Sessions and Kislyak met came shortly after a report in the New York Times that the British and Dutch governments provided information to the U.S. government describing meetings between associates of Trump and Russian officials in European cities.

The story also described a deliberate campaign by Obama administration political appointees to spread information about Russia’s alleged attempts to interfere in the election, as well as revelations that American intelligence agencies intercepted communications discussing contacts with Trump associates.

“This situation was serious, as is evident by President Obama’s call for a review — and as is evident by the United States response,” Schultz said in an email. “When the intelligence community does that type of comprehensive review, it is standard practice that a significant amount of information would be compiled and documented.”

Trump administration officials have repeatedly insisted that there was no collusion between the president’s team and the Russian government. They’ve dismissed questions about the matter as misgivings by Democrats upset over the election results, and have said that intelligence officials — including the FBI — have concluded there was no consistent contact during the campaign between Trump allies and the Kremlin.

“I think that Russia’s involvement in activity has been investigated up and down,” White House press secretary Sean Spicer said on Monday. “So the question becomes at some point, if there’s nothing to further investigate, what are you asking people to investigate?”