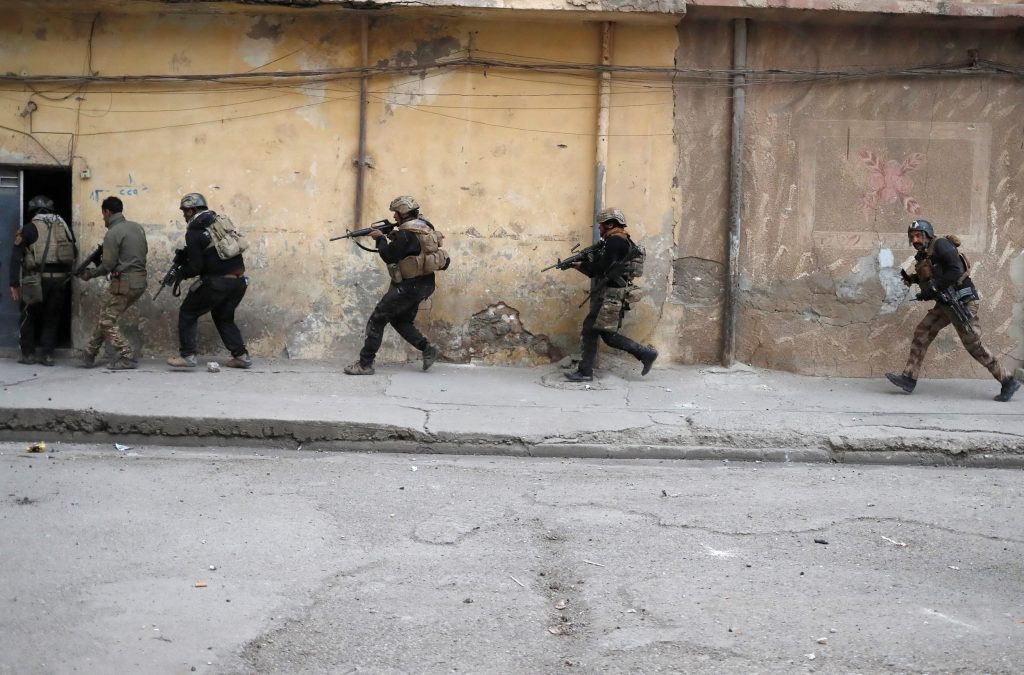 Islamic State terrorists launched a counterattack against advancing U.S.-backed Iraqi forces in western Mosul during an overnight storm, as the battle for control of the terrorists’ last major urban stronghold in Iraq intensified.

Explosions and gun fire rang out across the city’s southwestern districts in the early hours of Thursday. The fighting eased in the late morning, although a Reuters correspondent saw an airstrike and rebel mortar fire.

He said some terrorists hid amongst displaced families to get close to the U.S.-trained troops.

Iraqi forces captured the eastern side of Mosul in January after 100 days of fighting and launched their attack on the districts that lie west of the Tigris river on Feb. 19.

Defeating Islamic State in Mosul would crush the Iraqi wing of the caliphate declared by the group’s leader, Abu Bakr al-Baghdadi, in 2014, from Mosul’s grand old Nuri Mosque.

Residents reported that civilians were killed in air strike on an Islamic State-run mosque on Wednesday, highlighting the perilous situation facing hundreds of thousands of Mosul residents as the allied forces step up their campaign.

The residents said the blast collapsed or damaged a number of neighboring houses, many of which are badly made and poorly maintained. A spokesman for the U.S.-led coalition said he was not aware of an air strike on the Omar al-Aswad mosque.

The mosque was where Islamic State sent members of the Iraqi national police and armed forces to surrender their weapons and register in a terrorist database when the group seized control of the city in 2014. In return they received a pass to prevent their arrest and possible execution at militant check points.

The Iraqi military believes that several thousand terrorists, including many who traveled from Western countries, are hunkered down in Mosul among the remaining civilian population, which aid agencies estimated to number 750,000 at the start of the latest offensive.

More than 28,000 civilians have been forced from their homes in western Mosul since the Feb. 19 offensive began, while the total number displaced since the battle for Mosul started in October exceeds 176,000, according to the United Nations. On Thursday, more than a thousand more streamed out of southern Mosul, the majority on foot. Some said the terrorists fired at them as they crossed a defensive trench.