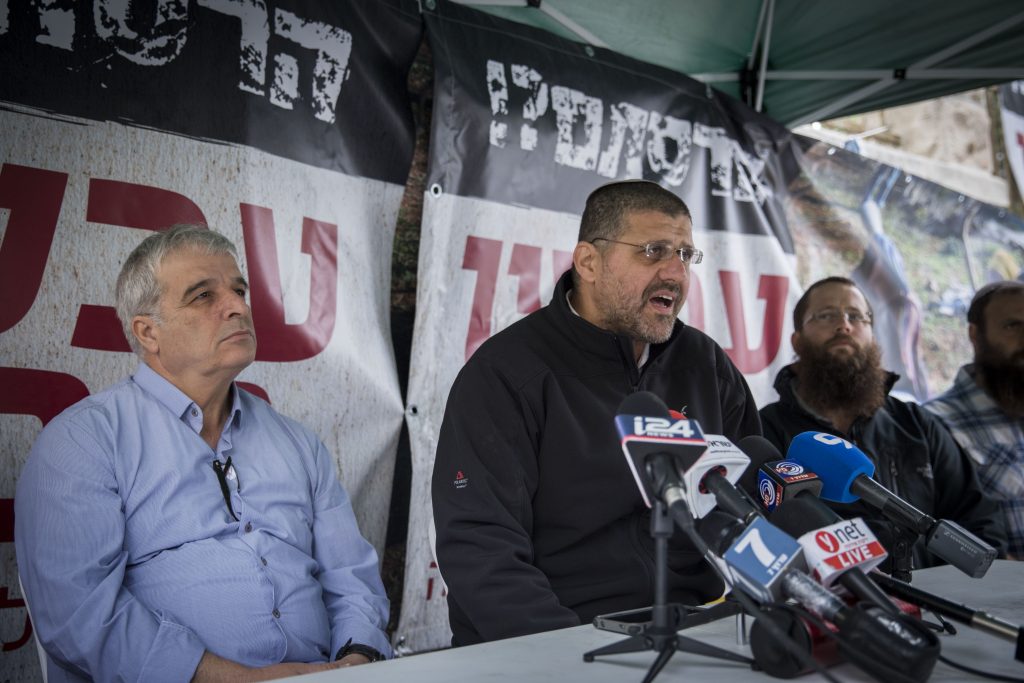 Six former residents of the Amona outpost community announced a hunger strike on Thursday to keep Israeli Prime Minister Binyamin Netanyahu to his promise to build new homes for them.

The strike was declared at a press conference in a protest tent that now stands on the sidewalk outside Netanyahu’s home in Yerushalayim, against the backdrop of a large sign that read: “You destroyed; now you must build.”

Amona evacuee Avihai Boaron read out a statement that called on the prime minister to fulfill his written and verbal pledges to the 40 families evacuated from Amona by court order last month.

“Today we are asking Netanyahu, will you not fulfill your obligation that is signed by your hand?” Boaron asked.

“What will the people of Israel say? That the Prime Minister doesn’t keep to his written agreements. What will the Israeli youth say? That one doesn’t have to keep their agreements? That an agreement is not worth the paper it is written on? That fulfilling agreements are for the weak?” he asked rhetorically.

“First they told us to wait because Donald Trump had just taken office. After that they told us to wait until Netayahu met with him, and after the meeting they just claimed that it’s not so simple and waited for us to give up,” Buaron said. “They hoped the public will forget. We have no intention of giving up…”

The agreement between Netanyahu and the evacuees was authorized by the attorney general and signed in the name of Netanyahu by his chief-of-staff Yoav Horowitz, his director-general Eli Gruner and Avi Bitan.

This is a legally binding agreement that would likely stand up in court, Boaron said.

On the day security forces evacuated Amona, Netanyahu pledged again to build such a settlement when he delivered a public address at the University of Ariel that was video-taped and widely circulated by the media.

Yet, a month has passed and the government has taken no steps toward keeping that promise, Boaron charged.

“We feel like Netanyahu is just leading us on,” said Tamar Nizri, an evacuee, at the press conference.