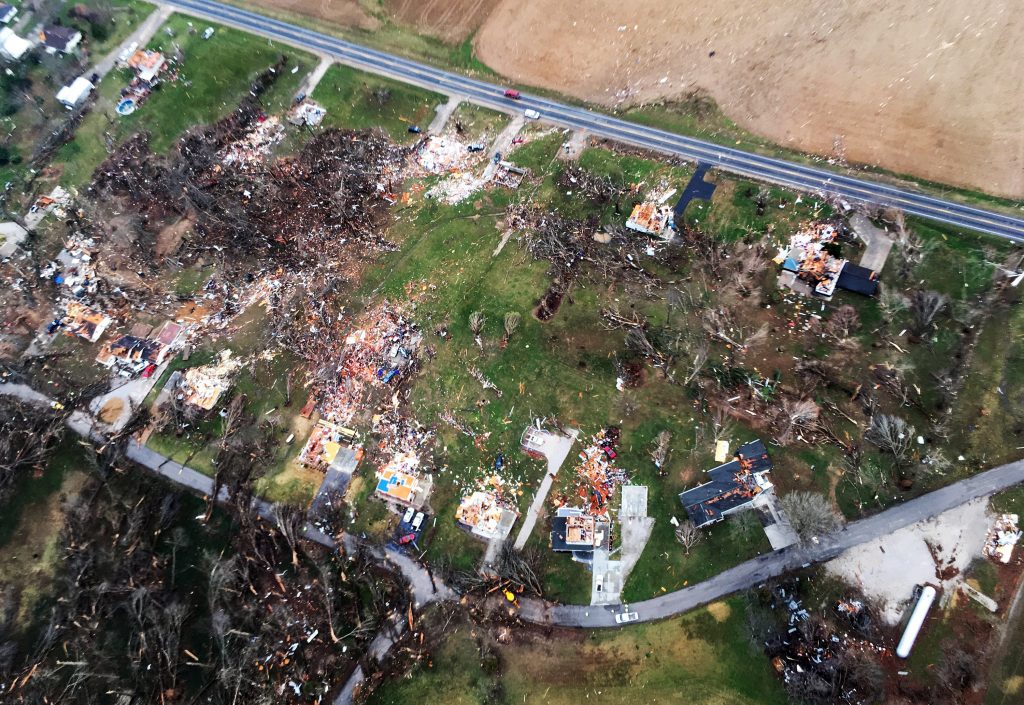 A deadly spring-like storm that one Illinois resident described as sounding like “an explosion of glass” damaged or destroyed hundreds of homes in that state and others, blew cars off a major Missouri highway, and forced people in an Arkansas town to huddle for safety in a high school.

Tornadoes were blamed in three deaths amid a large swath of destruction through the central U.S. before rumbling eastward. Forecasters said up to 95 million people are potentially in the storm’s path as it moves toward the mid-Atlantic states and southern New England. Forecasters said cities including New York, Philadelphia, Baltimore, Atlanta and Washington, D.C., could be at risk.

In northern Illinois, an uprooted tree killed 76-year-old Wayne Tuntland of Ottawa. More than a dozen others were injured. In the small community of Naplate, next to Ottawa, about a quarter of the roughly 200 homes were damaged, Fire Chief John Nevins said.

Debbie Loughridge, 61, and her son were inside their Naplate home, riding out the storm in the bathtub. Firefighters rescued them after the roof was torn off.

“All I heard was the wind and the breaking glass. Like an explosion of glass,” Loughridge said.

In southern Illinois, an apparent tornado near the town of Crossville killed a 71-year-old man and injured his wife, White County Coroner Chris Marsh said.

In Missouri, a twister touched down Tuesday night, blowing several vehicles off of Interstate 55 near Perryville, 65 miles southeast of St. Louis. A 24-year-old man from Perryville was thrown from one of the vehicles and died, Missouri State Highway Patrol Cpl. Juston Wheetley said. The wind was so strong that it lifted crumpled cars from a nearby salvage yard and tossed them along the highway.

“I feel we’re very blessed and fortunate we didn’t have a higher fatality number with this terrible disaster,” Triller said.

Meteorologist Rick Shanklin of the National Weather Service said the Missouri twister was a “strong tornado,” but the actual wind speed has not been estimated. Officials believe it was on the ground for 13 to 15 miles, crossing the Mississippi River into Illinois.

Marsh said a strong storm system moved from the Mountain West and collided with warm and humid air in the Midwest, which has enjoyed an unusually warm winter and where temperatures Tuesday were well into the 70s in many places.

“That’s why we saw storms more representative of late March and April,” Marsh said. “The atmosphere doesn’t care what the calendar says.”

Northeast of Little Rock, Arkansas, emergency managers said about 40 homes were damaged and 10 to 15 people were injured near Higginson, while additional minor injuries were reported at a state prison near Newport. Hundreds of people, including schoolchildren, had to take shelter at Bald Knob High School, which was hosting a state basketball tournament. Games were delayed until the storm passed.

Tornadoes may have touched down Wednesday in and near Nashville, Tennessee. Weather service meteorologist Sam Herron cited numerous reports of scattered damage across central Tennessee and a possible tornado near the Cool Springs mall south of Nashville. The city’s Emergency Operations Center tweeted that damage to power lines and trees indicated that another tornado may have touched down in the city.

A tornado is suspected of damaging several homes and a church building in Ireland, Indiana. No injuries were reported but one woman had to be rescued from a partially collapsed home.

Strong winds elsewhere in the Plains spread wildfires in Texas. Four homes were destroyed near Tulia, about 50 miles south of Amarillo, before firefighters beat back the flames. Texas A&M Forest Service spokesman Phillip Truitt said the fire prompted the evacuation of almost 1,200 homes.