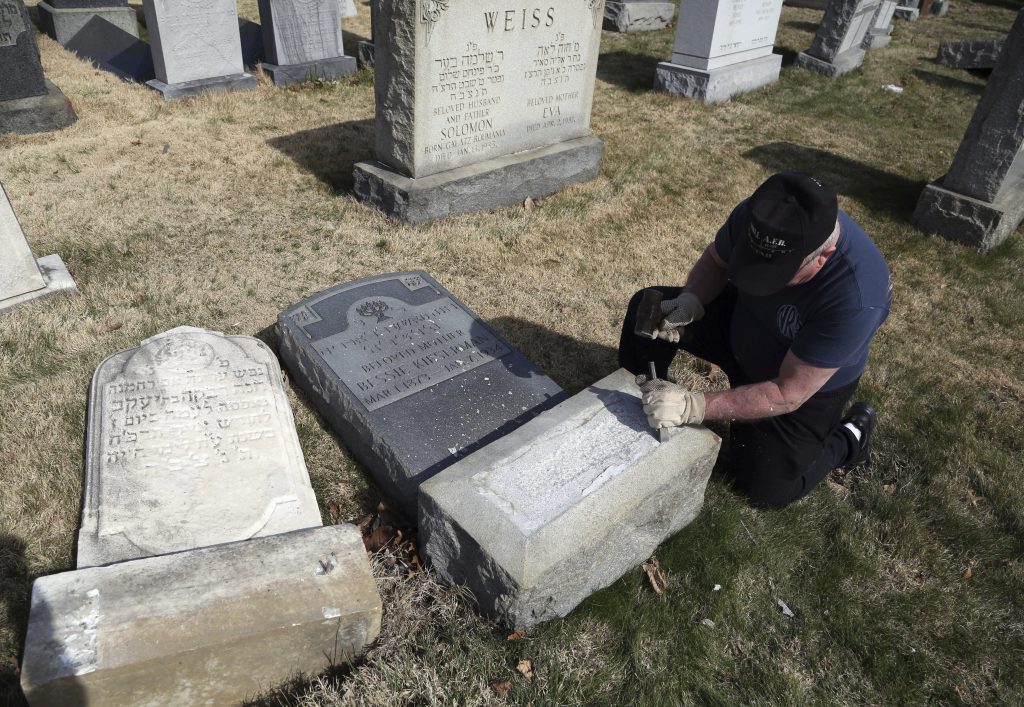 Dozens of volunteers from various faiths helped clean up a Jewish cemetery on Tuesday after scores of tombstones were toppled by vandals, as people from as far as Boston came to Philadelphia to rake leaves, help document the damage and pray for peace.

Police have not determined who was behind the vandalism at Mount Carmel Cemetery, which was reported over the weekend, or the motive. Various donors have come forward to offer a reward adding up to $50,000 for information leading to an arrest.

The desecration of more than 100 graves in the crowded cemetery came as Jewish Community Centers and day schools around the nation deal with wave after wave of hoax bomb threats. A Jewish cemetery in suburban St. Louis has also been targeted.

Republican President Donald Trump, who has been criticized as lax in denouncing the threats and other anti-Semitic acts across the country, opened his address Tuesday night to a joint session of Congress with his strongest condemnation yet.

“Recent threats targeting Jewish community centers and vandalism of Jewish cemeteries,” Trump said, “remind us that, while we are a country that disagrees on policy, we stand united in condemning hate and evil in all of its very ugly forms.”

Michael Bristow, a 52-year-old Catholic from Philadelphia went to Mount Carmel on Tuesday to help.

“This is absolutely insane,” Bristow said. “These people are human beings just like you, just like me. They’re not different. I thought this was all over with. Why is this still going on? I mean, grow up, world.”

Some volunteers raked leaves into bags, while others carried clipboards and began the process of mapping the hundreds of tombstones in the crowded cemetery, noting any damage to each. One man whose son will be commissioned as an Air Force officer in May became choked up as he uncovered the flat tombstone of a World War I veteran, which had been obscured by years of dirt and debris.

Another volunteer, Robert Weiss, 55, of Dover, Massachusetts, took a day off from work and drove more than five hours to Philadelphia to lend a hand.

“I just had to see this for myself, and participate,” said Weiss, adding that he was “beside himself” when he saw the damage.

After each one-hour shift, the volunteers walked to a corner of the cemetery, where a rabbi offered a meditation and led them in song — a Jewish prayer for peace.

Sarah Samuels, a University of Pennsylvania student, said she was gratified by the response. “But this shouldn’t have to have happened in the first place,” she said.

Jewish leaders said they’re not sure whether the vandals were motivated by anti-Semitism or simple maliciousness. Judging by the path of the damage, it appears that the vandals might have accessed the cemetery from an adjoining playground through a piece of damaged fence.

Bill Doran, the superintendent of another cemetery in Philadelphia, told The Philadelphia Inquirer that he visited Mount Carmel on Feb. 21 and noticed the damage then but didn’t report it, assuming the managers were already aware. Police first learned of the damage on Sunday.