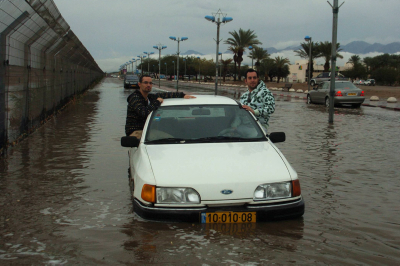 Flights were canceled to and from the city until at least noon Wednesday, officials said, and airlines advised travelers to check with their airlines before leaving for Eilat Airport or Ben Gurion Airport.

Rescue workers extracted 130 students who were on a field trip in the mountains outside Eilat. The students were stuck in the Black Canyons area. No injuries were reported, and rescue jeeps successfully removed the students from the area before a flash flood could develop. The students were able to take shelter from the rain on the buses that had brought them to the site, but because of a heavy stream that developed in one of the gullies in the valley, the buses were unable to leave the area.

Rain is expected throughout the country Wednesday, with flash flooding likely in several places, weather forecasters said. Temperatures will fall from the high levels earlier in the week and will be normal for this time of year. Things should clear out by Thursday night, forecasters added.