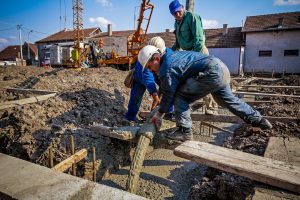 Builders cut back on construction spending in January by the largest amount in nine months, with weakness stemming from the biggest reduction in government activity in nearly 15 years.

Construction spending fell 1 percent in January, the Commerce Department reported on Wednesday. It was the first decline since September and the biggest drop since a 2.9 percent dip in April.

President Donald Trump wants to sharply increase spending on government infrastructure projects over the next decade. But his proposal is expected to face hurdles winning approval in Congress at a time of rising budget deficits.

For January, spending by the federal government on construction projects was down 7.4 percent, while spending by state and local governments fell 4.8 percent. The overall decline in government spending pushed total activity in the category down to a seasonally adjusted annual rate of $268.7 billion, the lowest level since last March.

The 1 percent fall in total construction spending followed a tiny 0.1 percent rise in December and left total activity at an annual rate of $1.18 trillion, 3.1 percent higher than a year ago.