National Chicago Records No Snow on Ground in January, February for 1st Time in 146 Years
National 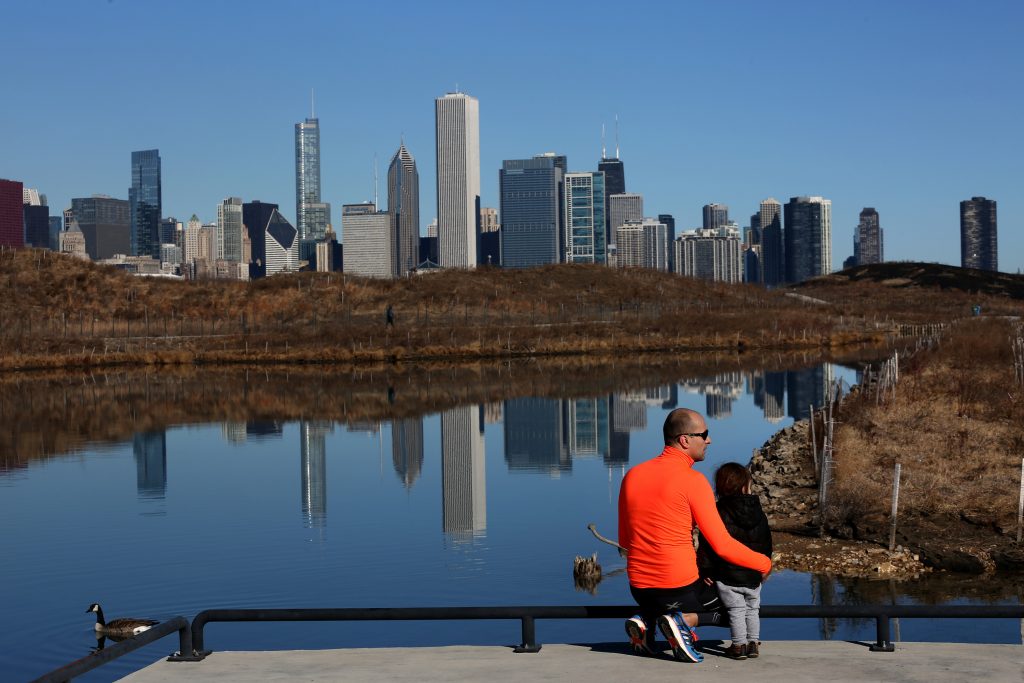 For the first time in 146 years, the National Weather Service documented no snow on the ground in Chicago in January and February — a record that put a spring in the step of some but weighed down others worried about climate change.

Because the snow measurement is taken at 6 a.m. at O’Hare International Airport, small amounts of snow that may have fallen later in the day and melted were not recorded, said Amy Seeley, meteorologist with the National Weather Service. This occurred Feb. 25 when there was a trace of snow and Jan. 30 when there was 0.1 inch. The weather service has been keeping data on snow on the ground for 146 years.

The record near-snowless start was overshadowed Tuesday by severe storms moving through the state.

The National Weather Service forecast large hail, winds, localized flooding and tornadoes Tuesday evening. A tornado hit Ottawa on Tuesday evening, killing one person, and the weather service said its spotters had reported a number of other tornadoes.

More stormy weather was forecast for the week, including possible snow.

WGN-TV meteorologist Tom Skilling said he believes the 146-year streak in Chicago is part of climate change and emphasized that it does not occur linearly, meaning that there is potential for cold winters in the future.

“This is occurring against a backdrop of a changing climate,” Skilling said. “I think the door is open to additional unusual weather events as we go forward.”

Other climate scientists say blips of weather, such as warm spells or snowless months, are too short of a time period to assign a true cause, and meteorologists point out that there are natural variances in weather over time that have nothing to do with climate change.

Patricia Orta, 56, of Archer Heights, who was walking back from lunch Tuesday on Michigan Avenue with an umbrella on her arm, said she was enjoying the warmer weather.

“I hope it happens more often,” Orta said with a laugh. “While it lasts, this is great!”

Skilling said that Tuesday was the 73rd consecutive day that Chicago has not seen more than an inch of snow.

He also said it is not unlikely to see snow in March.

“Warm as it’s been, we’re not out of the period where it’s inconceivable to have snow,” Skilling said. “The rain shower in the morning could turn into snow in the afternoon.”

Typically, January and February are the snowiest months of the year, said Jim Angel, state climatologist at the University of Illinois’ Illinois State Water Survey.

“It’s pretty impressive for any place in the northern part of the state to go both January and February with no snow on the ground,” he said.

Angel said warm air and ground temperatures contributed to the lack of snow accumulation, and this has affected trees, insects and animals.

“The biggest issue is because it’s been so warm all through the winter, it’s really encouraging the trees and shrubs and perennials to come out a little bit too early for their own good,” Angel said. “For example, we might have fruit trees that might be in dormancy right now, leaf out and their buds will start to swell and open; and that makes them highly vulnerable to frost later on.”

This phenomenon occurred in 2012 and 2007 when an April frost destroyed blooming trees during a similar time period, costing orchards millions of dollars in losses for apple, peach and cherry crops, Angel said.

“It’s a real risk, not only cosmetically for things in your backyard, but it also has tremendous economic damage for fruit growers,” Angel said. “It can really set an orchard back a couple years to get into this situation. The problem is there’s not much they can do it about it. You can’t slow down the trees. At this point, you just have to ride it out.”

Insects also have a higher likelihood of surviving and more opportunities to reproduce, Angel said. However, increased rainfall in the spring could mitigate this. And the warmer weather could affect migrating bird species.

“Some of that timing can be very tricky,” he said. “You don’t want to migrate into a new area before the food sources are available.”

“In the past mild winters, we’ve seen that net benefit from the economics side, unless you’re selling snow shovels,” Angel said.

Some experts predicted another “snowpocalypse” this winter, but Skilling and other analysts predicted a warmer-than-average winter because of the warm summer and autumn in 2016.

Orta bought a long jacket last year in preparation for a brutal winter.

“You always try to prepare for what you think is coming because it usually does,” Orta said. “This year, it’s a nice surprise, but I’m not going to sell my coat yet.”