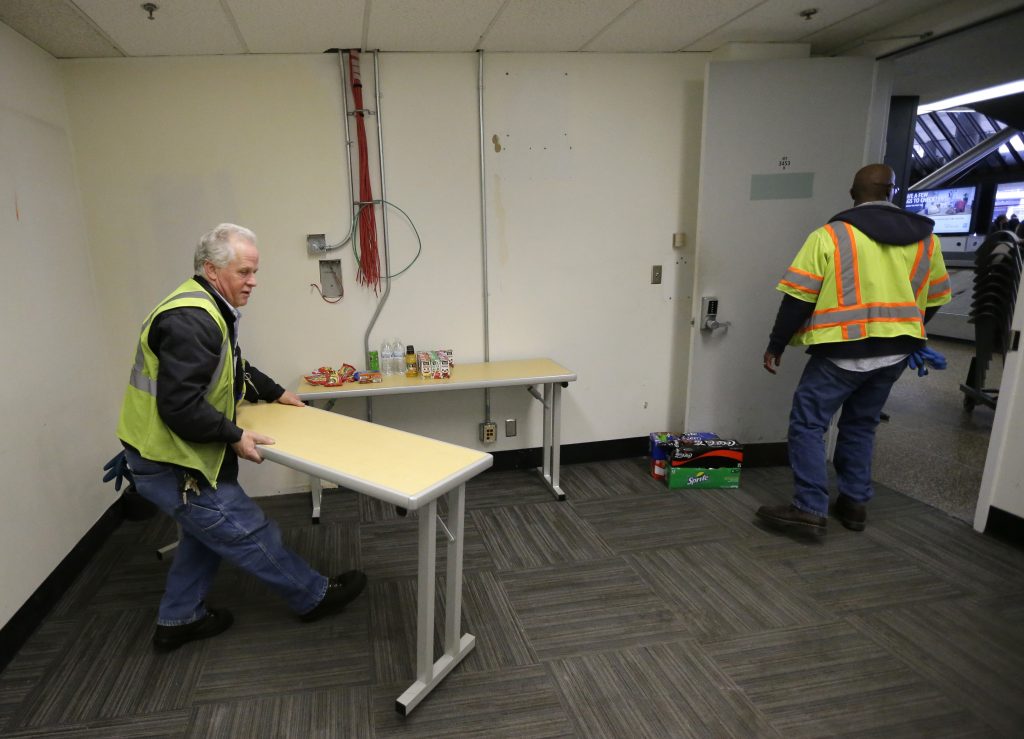 Airport officials and civil rights lawyers around the country are getting ready for President Donald Trump’s new travel ban — mindful of the chaos that accompanied his initial executive order but hopeful the forthcoming version will be rolled out in a more orderly way.

The new order was expected as soon as Wednesday. A draft suggested it would target people from the same seven predominantly Muslim countries but would exempt travelers who already have visas to come to the U.S.

Since last month’s ban, which courts have put on hold, a section of the international arrivals area at Dulles International Airport outside the nation’s capital has been transformed into a virtual law firm, with legal volunteers ready to greet travelers from affected countries and ask if they saw anyone being detained.

Similar efforts are underway at other airports, including Seattle-Tacoma International, where officials have drawn up plans for crowd control after thousands crammed the baggage claim area to protest the original ban.

“The plan is to be as ready as possible,” said Lindsay Nash, an immigration law professor at Cardozo School of Law in New York who has been helping prepare emergency petitions on behalf of those who might be detained.

President Trump’s initial action, issued Jan. 27, temporarily barred citizens of Iran, Iraq, Syria, Yemen, Somalia, Sudan and Libya from coming to the U.S. and halted acceptance of all refugees. The president said his administration would review vetting procedures amid concerns about terrorism in those seven nations.

Protesters flooded U.S. airports that weekend, seeking to free travelers detained by customs officials amid confusion about who could enter the country, including U.S. permanent residents known as green-card holders.

Attorneys also challenged the order in court, including officials from Washington state. That lawsuit, which Minnesota joined, resulted in a federal judge temporarily blocking the government from enforcing the travel ban, a decision unanimously upheld by a panel of the 9th U.S. Circuit Court of Appeals.

Many civil rights lawyers and activists have said they don’t believe a new order would cure all the constitutional problems of the original, including the claim that it was motivated by anti-Muslim discrimination.

Trump has said he singled out the seven countries because they had already been deemed a security concern by the Obama administration.

In his first address to Congress on Tuesday night, President Trump said his administration “is taking strong measures to protect our nation from radical Islamic terrorism” and is working on improved vetting procedures.

“And we will shortly take new steps to keep our nation safe — and to keep out those who would do us harm,” President Trump said.

Activists and airport officials alike said they hoped it would be phased in to give travelers fair warning, which might preclude any detentions from arriving flights.

“We are prepared and willing,” said Rebecca Sharpless, who runs the immigration clinic at the University of Miami School of Law. “But it’s unlikely to cause the same kind of chaos of last time.”

At Dulles, Sea-Tac, Minneapolis-St. Paul and other airports, legal volunteers have greeted arriving travelers in shifts every day since the initial ban, wearing name tags or posting signs in different languages to identify themselves.

The legal-services nonprofit OneJustice was ready to send email alerts to 3,000 volunteers in California if needed, deploying them to San Francisco and Los Angeles airports for people affected by any new order, chief executive Julia Wilson said.

Groups urged those arriving at 17 other airports, including Miami, Atlanta and San Diego, to register with Airport Lawyer, a secure website that alerts volunteer lawyers to ensure travelers make it through customs without trouble.