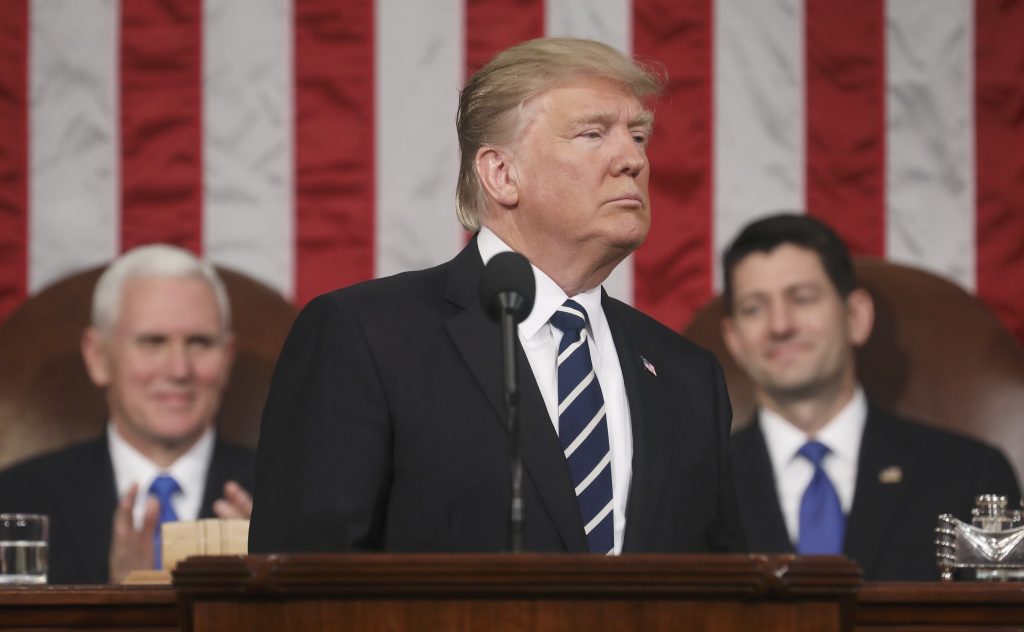 Striking an optimistic tone, Trump declared: “The time for small thinking is over.”

Trump’s address came at a pivotal moment for a new president elected on pledges to swiftly shake up Washington and follow through on the failed promises of career politicians. His opening weeks in office have been consumed by distractions and self-inflicted wounds, including the bungled rollout of a sweeping immigration and refugee executive order that was blocked by the courts.

Trump, who typically relishes flouting political convention, embraced the pomp and tradition of a presidential address to Congress. He stuck largely to his script, made occasional overtures to Democrats and skipped the personal insults he so often hurls at his opponents.

The president was greeted by enthusiastic applause as he entered the House chamber, though it was filled with Democrats who vigorously oppose his policies and many Republicans who never expected him to be elected. Most Republican lawmakers have rallied around him since the election, hopeful that he will act on the domestic priorities they saw blocked during President Barack Obama’s eight years in office.

Topping that list is undoing Obama’s signature health care law and replacing the sweeping measure. Trump offered a basic blueprint of his priorities, including ensuring that those with pre-existing conditions have access to coverage, allowing people to buy insurance across state lines and offering tax credits and expanded health savings accounts to help Americans purchase coverage. He suggested he would get rid of the current law’s requirement that all Americans carry insurance coverage, saying that “mandating every American to buy government-approved health insurance was never the right solution for America.”

Making a direct appeal for bipartisanship, Trump turned to Democrats and said, “Why not join forces to finally get the job done and get it done right?”

Democrats, now firmly ensconced in the minority, sat silently while Republicans stood and cheered. Some wore blue, pro-health care buttons that read “Protect our care,” and dozens of Democratic women wore white in honor of the suffrage movement.

Trump was vague in his call for tax reform, another Republican priority. He promised “massive tax relief for the middle class” and a reduction in corporate tax rates, but glossed over how he would offset the cuts.

The president also urged Congress to pass a $1 trillion infrastructure package financed through both public and private capital.

“The time has come for a new program of national rebuilding,” he said.

Trump sent unexpectedly mixed messages on immigration, one of his signature campaign issues. He pledged to vigorously target people living in the U.S. illegally who “threaten our communities and prey on our citizens.” But he told news anchors before his speech that he was open to legislation that could provide a pathway to legal status, and he told Congress he believed “real and positive immigration reform is possible.”

First lady Melania Trump sat with special guests who were on hand to amplify the president’s agenda, including the family members of people killed by immigrants living in the U.S. illegally. The widow of former Supreme Court Justice Antonin Scalia also sat alongside Mrs. Trump, a reminder of the president’s well-received nomination of federal appeals court Judge Neil Gorsuch to fill Scalia’s seat.

The majority of Trump’s address centered on the domestic, economic-focused issues that were at the center of his presidential campaign. His national security message centered largely on a call for significantly boosting military spending and taking strong but unspecified measures to protect the nation from “radical Islamic terrorism.”

Underscoring the human cost of those efforts, Trump honored Chief Special Warrant Officer William “Ryan” Owens, who was killed in a raid in Yemen during his first days in office. Owens’ widow sat in the guest box with tears streaming down her face as the crowd stood and applauded at length.

Owens’ death, as well as the killing of several civilians, have raised questions about the effectiveness of the raid. Pushing back, the president said Defense Secretary Jim Mattis had assured him that the operation generated “large amounts of vital intelligence that will lead to many more victories in the future against our enemies.”

Trump also voiced support for NATO but reiterated his call for partner countries to meet their financial obligations to the military alliance. Trump has previously called NATO “obsolete,” setting some allies on edge about his commitment to the partnership.

The full text of President Trump’s address is available here.