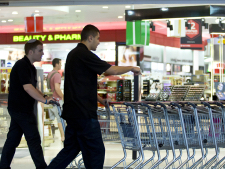 The cost of flights to and from Israel – at least on some flights – has fallen in recent years, thanks to the increased number of low-cost carriers that have entered the Israeli market. But the cost of a cup of coffee at Ben Gurion Airport is still far too high for most passengers’ tastes – and as a result, the Airports Authority will be holding a new tender for coffee shops in the duty-free area of the airport.

The new tender for two coffee shops is being issued after the current one, held by the Café Joe chain, is set to expire, and the Authority decided not to extend it. Among the reasons was the high costs associated with the coffee shops, long the bane of travelers, who have complained that the restaurants at the airport, and especially the coffee shops, were taking advantage of their status as “captive” customers who did not have a choice of where to dine. According to critics, feeding a family of five at the airport costs in the neighborhood of NIS 200 – far more than it would outside the airport.

The Authority has set goals for tender applicants, with the winners to charge no more than NIS 7 for a cup of espresso, NIS 10 for a small cappucino, and NIS 7 for a bottle of water. Those prices have already been imposed on several chains that operate in the airport. In order to make it easier for applicants to deal with the usually expensive rents charged at Ben Gurion, the Authority is cutting its application and franchise fee by half, to NIS 5 million – which still sounds like a lot, but allows a restauranteur to tap into a huge market, where the average coffee shop in 2016 took in NIS 145 million.