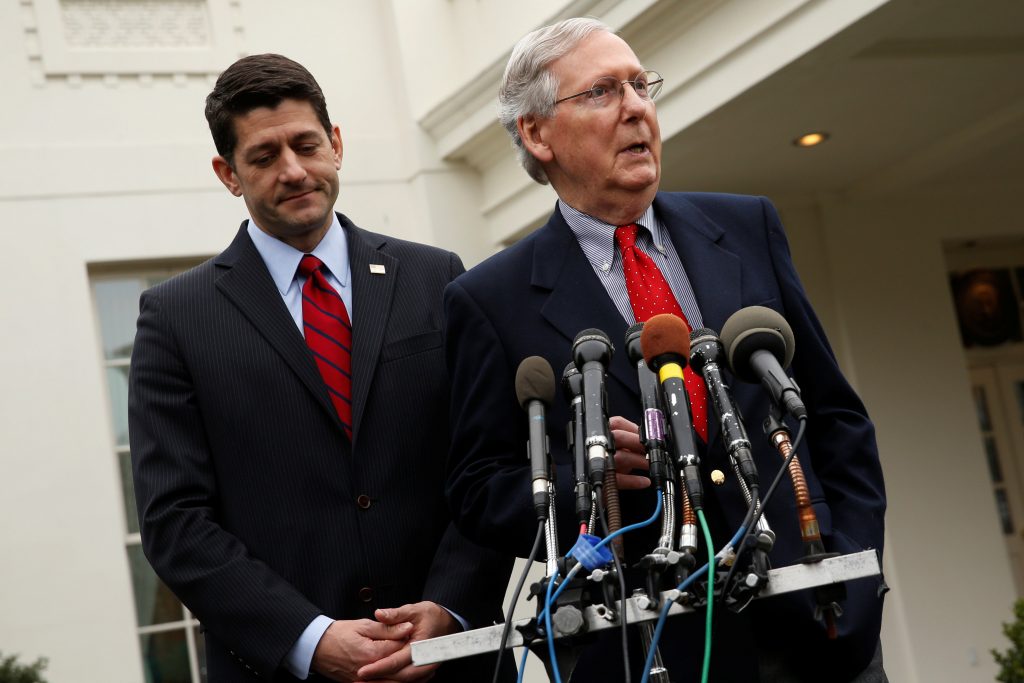 Republicans confronted a conservative rebellion in their own party on Tuesday over their long-promised plans to repeal and replace Obamacare, and beseeched President Donald Trump to settle the dispute in his first speech to a joint session of Congress.

“He’s the leader on this issue right now; he’s the one that’s got to hold us together,” said Rep. Dennis Ross of Florida as he left a morning meeting during which he said Republican leaders urged the rank-and-file to “stay strong” on the issue and told them: “Now is not the time to back down.”

The pep talk from leadership came amid signs of serious trouble for the emerging House GOP health-care plan, even before legislation is officially released. Conservatives are objecting to new tax credits that would help consumers buy health care, arguing they amount to a costly new entitlement.

Influential House conservatives say there’s no way the approach can pass the House.

The dispute comes a month into Trump’s presidency, and seven years after the Affordable Care Act passed a Democratic-controlled Congress with Barack Obama in the White House. Now the Republicans are in charge of the White House and Congress. Yet, having spent all those intervening years promising to uproot the law and replace it with something better, they find themselves flailing and divided at the moment of truth.

Most Republicans and aides professed to have little insight into what Trump would say Tuesday night, and to what extent he would endorse their plan, though several all but begged him to do so.

“What the president can say is that the plan that gets presented to the conference is the one you need to vote ‘yes’ on,” said GOP Rep. Bill Flores of Texas. “That’s how he can be helpful.”

House Speaker Paul Ryan of Wisconsin sought to put a positive face on the divisions.

“You’re going to have a lot of churning on any kind of legislative product like this,” Ryan said. “This is a plan that we are all working on together — the House, the Senate and the White House — so there aren’t rival plans.”

“I feel at the end of the day when we get everything done and right, we’re going to be unified,” Ryan said.

For now, most evidence is to the contrary.

After a recess week filled with raucous town hall meetings, lawmakers’ return to the Capitol this week immediately put deep divisions on display. The two leading conservative groups in the House both announced their opposition to House leadership health care plans based on a leaked draft and reports that the bill would cost more than expected while covering fewer people than the Affordable Care Act.

And three key conservative senators — Mike Lee of Utah, Rand Paul of Kentucky and Ted Cruz of Texas — added their voices in opposition, too, announcing that they will resist “Obamacare Lite” and “accept nothing less than full repeal of Obamacare.”

Amid the high-profile defections, Senate Majority Leader Mitch McConnell of Kentucky summoned Republicans to a meeting Wednesday afternoon to hash things out.

Health care is far from the only issue dividing Republicans. Plans to overhaul the tax code have them tied in knots, and senior lawmakers are busy throwing cold water on Trump’s budget proposal, which was made public in broad outlines on Monday. The budget envisions a huge $54 billion surge in U.S. military spending while slashing domestic programs and foreign aid.

GOP Rep. Mike Simpson of Idaho, a senior member of the Appropriations Committee, said the budget as presented could not possibly pass the House.

“No, no. There’s a lot of members that have a lot of interest in a lot of these programs,” Simpson said. “There’s more to our government than just defense.”

And, President Trump’s budget would leave large deficits intact while sparing Social Security and Medicare, the entitlements that make up an enormous and growing share of the federal budget. That puts Mr. Trump in direct conflict with Ryan and other leading Republicans who’ve long advocated adjusting entitlement programs to put them on a more sustainable footing and get deficits under control.

Ryan himself, pressed on whether he still favored reforming entitlements — something that has been his legislative calling card for years — claimed that repealing and replacing Obamacare actually qualifies as entitlement reform.

Republicans hope for clarity on all these issues and more from President Trump on Tuesday night.

“More than anyone else, the president will drive what happens next,” said GOP Rep. Mark Sanford of South Carolina.

Unlike the inauguration, Democrats plan to attend the speech, with women in the House wearing white to honor the suffrage movement and also to “stand in solidarity with the women of our nation.”