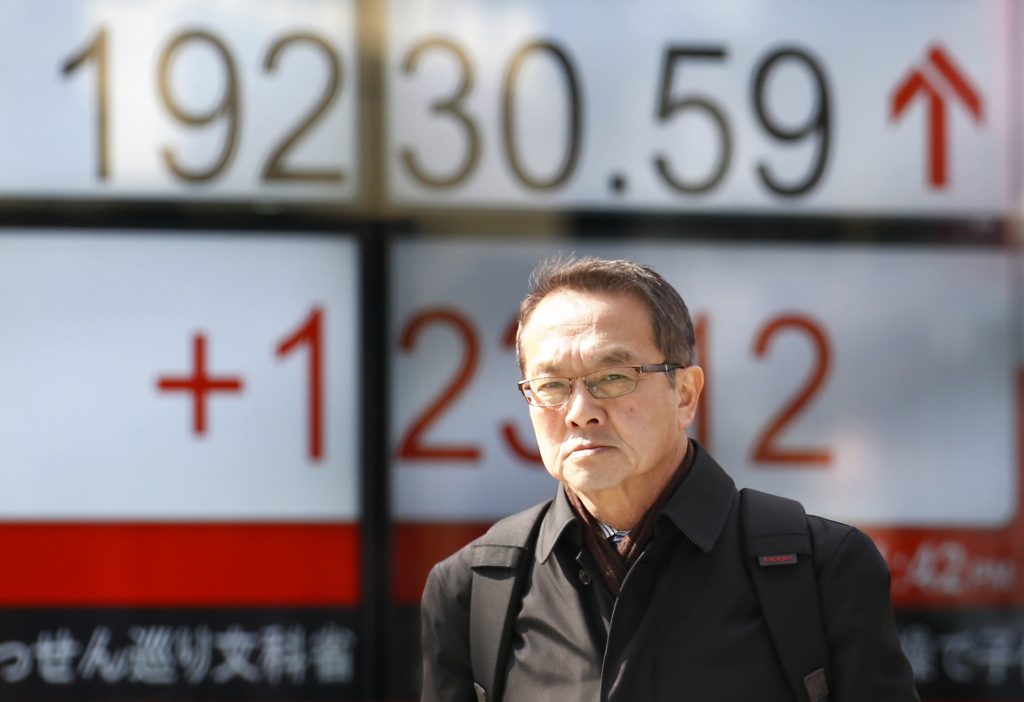 Asian shares lost their grip on Tuesday but were still on track for a winning month, bolstered by gains on Wall Street as investors awaited a speech by President Donald Trump for signals on tax reform and infrastructure spending.

In Europe, Germany’s DAX and Britain’s FTSE were expected to open higher.

MSCI’s broadest index of Asia-Pacific shares outside Japan erased earlier modest gains and edged down slightly by mid-afternoon. But it was still up more than 3 percent this month and more than 9 percent for the year so far.

On Monday, U.S. stocks edged up, with the Dow Jones Industrial Average closing at a record high for a 12th straight session, after President Trump said he would talk about plans for “big” infrastructure spending in his first major policy address to Congress on Tuesday.

“Twelve in a row and counting as the Dow closed higher for yet another consecutive record close, as well as new record highs for both major U.S. benchmarks, and this looks set to translate into a positive European open this morning,” wrote Michael Hewson, Chief Market Analyst at CMC Markets UK.

Japan’s Nikkei stock index pared its gains but still ended up 0.1 percent, up 0.4 percent for February and nearly flat for the year to date, as investors awaited President Trump.

“This could be like the case of his inauguration speech, in which expectations were high, but he didn’t come up with any concrete details,” said Ayako Sera, market strategist at Sumitomo Mitsui Trust Bank.

“The market does not want a repeat of that, and wants to hear some actual plans, or there will be disappointment,” she said.

Treasury Secretary Steven Mnuchin said in an interview on Sunday that President Trump will use the event to preview some elements of his sweeping tax reform plans.

The president will seek to boost Pentagon spending by $54 billion in his first budget proposal and slash the same amount from nondefense spending, including a large reduction in foreign aid, a White House budget official said.

Dallas Fed President Robert Kaplan said on Monday that the Fed might need to raise interest rates in the near future to avoid falling behind the curve on inflation.

The yield on benchmark 10-year U.S. Treasuries, which had slumped to more than five-week lows last week, stood at 2.363 percent in Asian trade, not far from their U.S. close of 2.367 percent on Monday.

Crude oil prices were largely steady, as expectations of higher U.S. crude production offset reports of high compliance with OPEC’s production cut agreement. U.S. crude was up 0.3 percent on the day at $54.20 per barrel, while Brent crude added 0.4 percent to $56.14.

Spot gold edged up 0.1 percent to $1,254.48 an ounce but remained shy of a 3-1/2-month peak scaled on Monday as investors awaited President Trump’s speech.