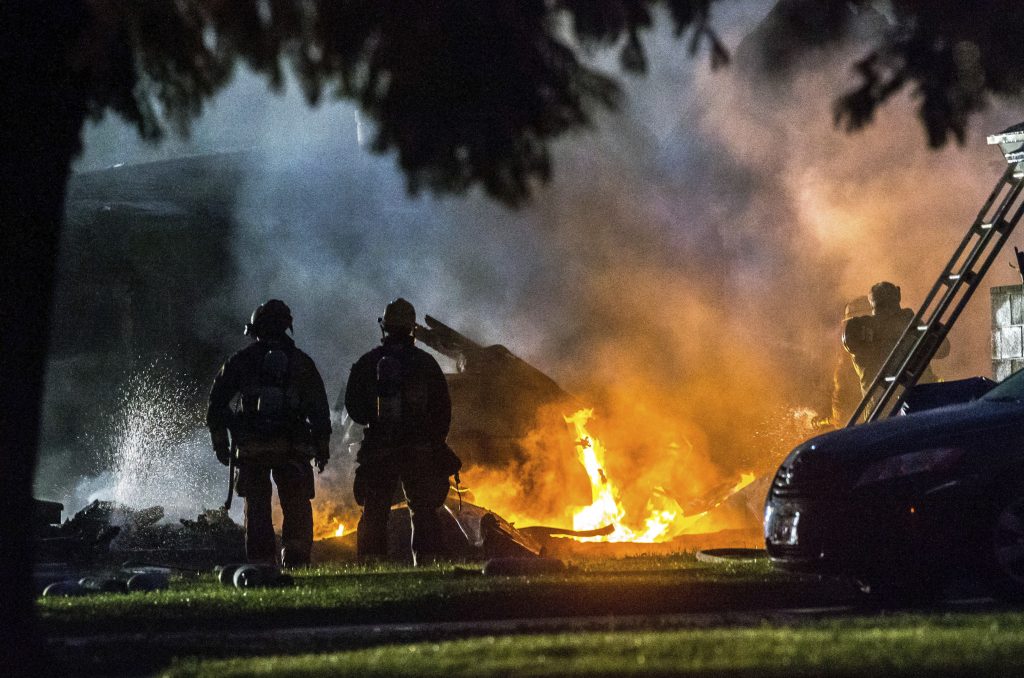 A husband, wife and three teenagers were on the plane that had just taken off from Riverside Municipal Airport at 4:40 p.m. intending to return to San Jose when it crashed in the residential neighborhood, Riverside Fire Chief Michael Moore said.

One of the teenagers, a girl, was thrown from a back seat of the plane on impact but had only minor injuries, Chief Moore said. Three witnesses told news stations she crawled from the home asking for help. She was able to talk to firefighters about what had happened as she was taken to Riverside Community Hospital, the fire chief said.

Firefighters entered one of the burning houses and pulled out another plane passenger, who was unconscious. That victim underwent surgery at Arrowhead Regional Medical Center in San Bernardino and was in critical condition, Chief Moore said.

Three bodies, all from the plane, were found in the combined wreckage of the aircraft and the homes.

Authorities had earlier said that four were dead, and that the critically injured victim was a resident of the homes, but later reduced the death toll to three and said all five victims had been on the plane. They have not given the ages or identities of the victims.

All the residents of the homes have been accounted for, Chief Moore said. The two homes that were hit directly were destroyed, and there was minor damage to some neighboring houses, he said.

The plane was broken into hundreds of pieces, its propeller sitting on the roof of a nearby home, and the fire burning with jet fuel was still ablaze several hours after the crash. Firefighters found plane pieces about a half-mile away.

Ms. H.L. Reyes, who lives about a quarter-mile from the crash site, told The Associated Press she felt the ground shake and saw plumes of black smoke.

“I thought it was a possible earthquake, and we heard all the birds just suddenly react outside, too,” Reyes said. “This was just like a nightmare coming true.”