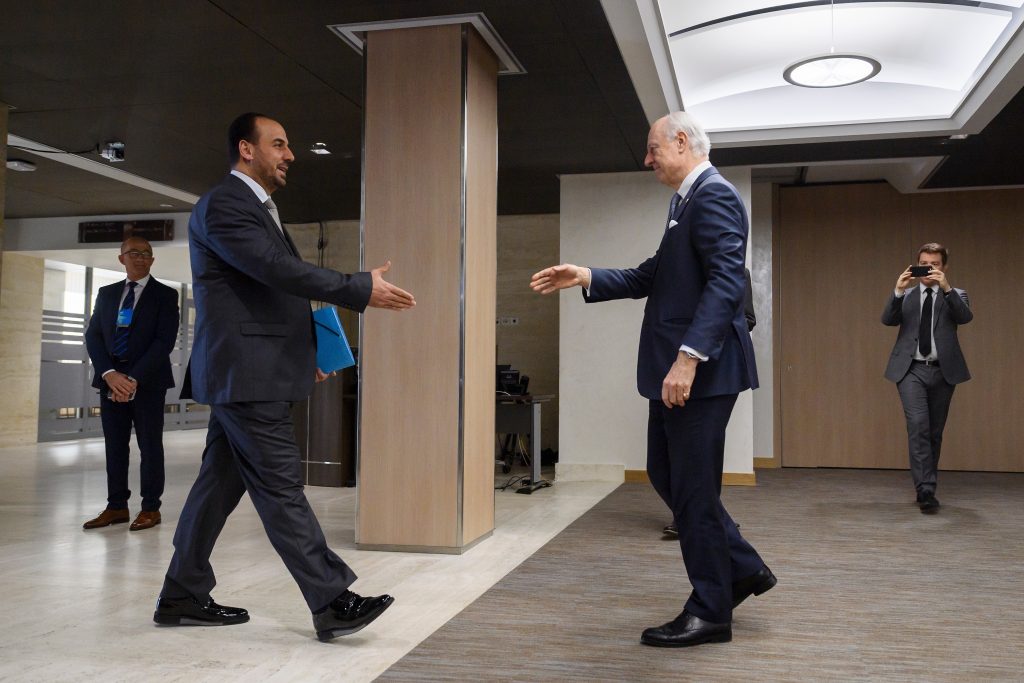 Airstrikes on Syria’s rebel-held Idlib province killed at least 11 people on Monday, opposition activists said, in the latest spasm of violence to mar U.N.-brokered talks in Geneva between the government and the opposition.

Separately, there were unconfirmed reports that a top al-Qaida official was killed in an airstrike, also in Idlib.

Also on Monday, pro-government forces drove Islamic State terrorists out of a line of villages in the congested Turkish frontier region, blocking the path of rival Turkish-backed opposition forces from reaching the de facto IS capital, Raqqa, opposition activists said.

The SITE Intelligence Group, which monitors terrorist groups, said Abdullah Muhammad Rajab Abdulrahman, the deputy to al-Qaida leader Ayman al-Zawahiri, may have been killed in a U.S. airstrike on an unmarked sedan on Sunday evening. It cited reports circulating on Jihadist social media accounts.

The northwestern province falls largely under the control of an al-Qaida-linked rebel coalition. Hundreds of thousands of Syrians displaced by fighting are living as refugees there.

Images of the vehicle purported to have been carrying Abdulrahman, known more widely by his nom de guerre Abu al-Khayr al-Masri, showed damage to the passenger compartment of the beige Kia sedan but no damage to the engine block. The roof was blown open on the right side of the vehicle.

The Britain-based Syrian Observatory for Human Rights reported that a top al-Qaida official was killed in a drone strike, but could not confirm it was al-Masri.

Al-Masri was a close affiliate to late al-Qaida founder Osama Bin Laden and was once the chairman of the organization’s management council, according to a Washington Post report citing leaked U.S. intelligence documents dating back to 2008.

Iranian authorities are believed to have jailed him following the 9/11 attacks, before releasing him in a prison exchange with al-Qaida in Yemen in 2015.

A senior official at a rival jihadist faction in northern Syria urged caution over the reports, saying other top al-Qaida officials in Syria had staged their own deaths only to defect from the organization. The official asked not to be identified because of rivalries between the various factions.

The opposition forces, which seized al-Bab from the Islamic State terror group last week, will now have to confront government forces or the rival Kurdish forces if they desire to reach Raqqa, farther southwest along the Euphrates river.

Those forces are accompanied by a deployment of Turkish troops, tanks and artillery inside Syrian territory. Turkey says the nearby Kurdish-led forces are terrorists.

The opposition accused the government of setting up a buffer zone between opposition fighters and IS.

“While fierce battles are going on between the Islamic State group and the Free Syrian Army, the (Syrian) regime is actually coordinating with IS and has opened a corridor to prevent the FSA from fighting IS,” said top Syrian opposition negotiator Nasr al-Hariri.

“The regime must stop its lies. It is the biggest of terrorists and it has continued to play the terrorism card to defame the revolution and to give a bad image to the revolution,” he told reporters in Geneva.

He spoke after an opposition delegation met Monday with U.N. mediator Staffan de Mistura to continue talks aimed at resolving Syria’s six-year-old war. The talks, which began last week, have so far been stuck on the agenda.

The government insists the talks should start by an agreement on the need to fight terrorism, while the opposition wants to discuss a political transition.

Back in Idlib, the activist-run Baladi News network published footage of rescuers searching for victims in the rubble of a block destroyed in presumed government or Russian airstrikes on Monday, in the town of Areeha in northwest Syria.

The Britain-based Syrian Observatory for Human Rights said at least seven civilians and four other unidentified victims had been killed. It blamed the attack on government warplanes.