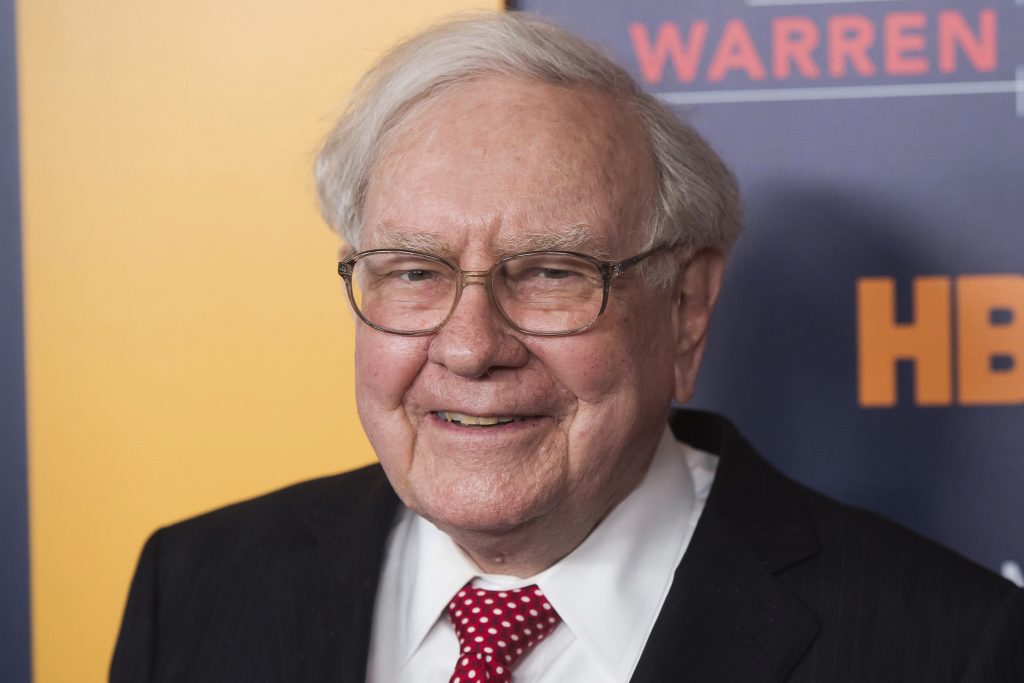 Billionaire Warren Buffett, famously leery of technology companies, has loaded up on Apple shares after noticing how inseparable iPhone users are from the gadget once they get one in their pocket.

Mr. Buffett said on CNBC Monday that Berkshire Hathaway now holds about 133 million shares of Apple after buying yet more of the company’s stock this year. That’s more than double stake that Berkshire revealed earlier this month.

Mr. Buffett spoke to CNBC at length after releasing his annual letter to shareholders over the weekend.

Mr. Buffett’s aggressive buying spree caught many off guard because he has long said it’s too difficult to predict which tech companies will prevail.

In this case, perceptions matter. Mr. Buffett sees Apple as more of a consumer products maker than a tech company, which brought the iPhone maker right into his comfort zone.

“Apple strikes me as having quite a sticky product and an enormously useful product to people who use it, not that I do,” said Mr. Buffett, who produced the basic flip phone that he relies on.

Mr. Buffett was struck by how many of his grandchildren’s friends use iPhones and how many people visiting the Berkshire-owned Nebraska Furniture Mart, which has an electronics wing, wanted to replace one iPhone with another.

Apple wasn’t the only investment evolution for Mr. Buffett, who bought more than $9 billion of airline stocks after years of advising investors to steer clear of the industry, citing its significant capital requirements and poor returns.

Mr. Buffett said it’s true airlines had “a bad century” but he now believes that consolidation in the industry has created a healthier environment, pointing out that planes of major carriers are flying at at least 80 percent capacity.

Berkshire Hathaway holds a sizeable stake in American Airlines, Delta Air Lines, United Continental and Southwest. On Monday, United announced that it was ramping up flights in a number of crucial locations.

Contentious political divisions in the U.S. were addressed briefly. Mr. Buffett said he agrees with President Donald Trump on some issues such as entitlements, social security and the fact that some businesses face too much regulation.

Mr. Buffett said he will judge Mr. Trump’s presidency four years from now based on how safe he has kept the country, how the economy is doing and on how many people are sharing in the wealth.

Mr. Buffett said he doesn’t think the border adjustment tax proposal Republicans are considering will happen because it’s too complicated. Consumers will end up footing the bill if retailers have to pay more taxes on imports, he said.

While the long-time Democrat who supported Hillary Clinton last year said he’d be unlikely to vote for Mr. Trump, he said mixing investments and politics is a mistake. The U.S. economy will grow regardless of who is president.

That was one of the themes Mr. Buffett emphasized in his letter to shareholders of the Omaha, Nebraska, conglomerate he leads. Berkshire owns more than 90 companies, including BNSF railroad, Geico insurance, utility, clothing, furniture and jewelry firms. It also has major investments in such companies as American Express, IBM and Wells Fargo & Co.

Mr. Buffett said Berkshire and 3G were interested only in a mutually agreed upon tie-up, not a hostile takeover.

The end of one deal has not chilled the pursuit of others by the consummate dealmaker.

Berkshire had roughly $86 billion cash on hand at the end of the year, and Mr. Buffett is prepared for another major acquisition if he can find one he likes.

One place where he has retreated is the volatile retail sector.

Mr. Buffett sold off most of Berkshire’s Wal-Mart stock over the past few months, saying it’s a hard business and Wal-Mart faces such intense competition from Amazon and other online retailers.

“I think retailing is too tough for me,” Mr. Buffett said. “I just decided I’d look for an easier game.”