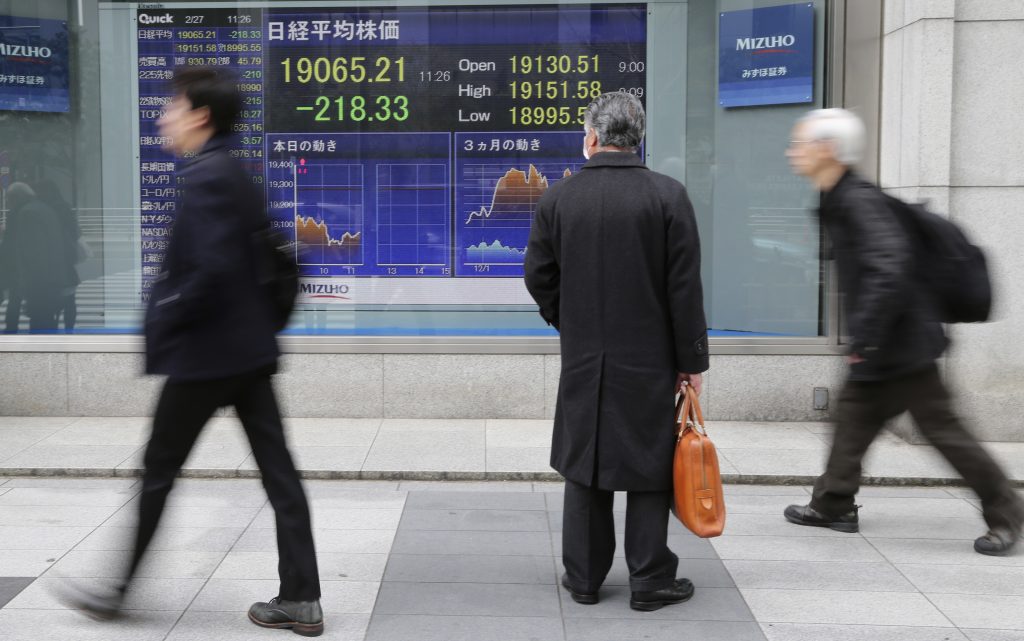 Asian stock markets were lower Monday as investors looked ahead to President Donald Trump’s speech to Congress this week for details of promised tax cuts and infrastructure spending.

The Dow Jones industrial average extended its winning streak to an 11th day on Friday despite investor unease about uncertainty over Trump’s pledge to cut taxes. Investors bought utility and phone company stocks, which pay large dividends, while energy companies declined. The Dow ended up just under 0.1 percent at 20,821.76. Standard & Poor’s 500 index rose 0.1 percent to 2,367.34. The Nasdaq composite rose 0.2 percent to 5,845.31.

Investors looked ahead to President Trump’s speech Tuesday to a joint session of Congress for details of how he plans to carry out promises to cut taxes and step up infrastructure spending. U.S. stocks have been buoyed by President Trump’s promise of pro-business changes but investor unease over the size and speed of changes is growing. Analysts say less money is flowing into “Trump trades” that would benefit from the president’s promised changes.

“Doubts continue to build on whether Trump will carry out his promise on infrastructure investment” and the timing of possible tax cuts is slow, Mizuho Bank said in a report. “Given the diminished expectations, we are hopeful that Trump, with the help of his speechwriters, could imbue optimism back into markets over his proposed tax reforms,” the bank said. “Particularly, we will watch for any information for the magnitude of tax cuts under discussion, and also gauge whether Trump can court political support for his more controversial measures, including border taxes.”

Hong Kong and Thailand report January trade on Monday. Japan is due to report factory output and retail sales Tuesday and jobs and inflation Friday. India releases economic growth data for the final quarter of 2016 on Tuesday and Australia does the same Wednesday.

Benchmark U.S. crude gained 36 cents to $54.35 per barrel in electronic trading on the New York Mercantile Exchange. The contract fell 46 cents on Friday to $53.99. Brent crude, used to price international oils, added 39 cents to $56.70 in London. It lost 51 cents the previous session.